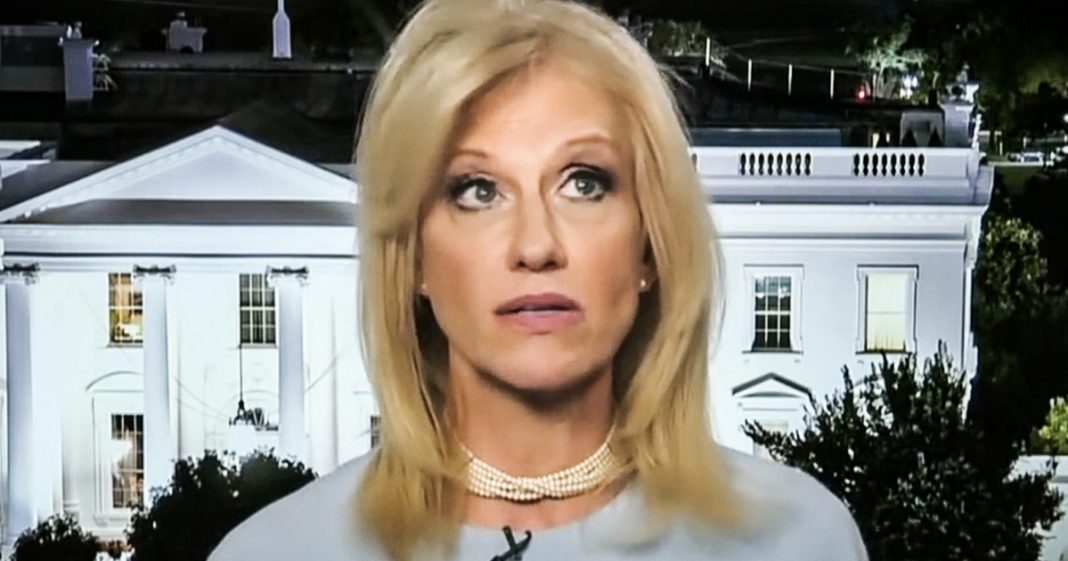 During a recent appearance on Sean Hannity’s Fox News program, Kellyanne Conway went off on a rant about Michelle Wolf’s White House Correspondents Dinner monologue, still visibly fuming over the joke made at her expense. But during Conway’s diatribe, she touched on something that deserves broader discussion – the attacks on women. She opened a can of worms that she shouldn’t have touched, as Ring of Fire’s Farron Cousins explains.

Kellyanne Conway, counselor to the President of the United States is still super pissed about the fact that Michelle Wolf made a joke about her at the Saturday evening White House Correspondents’ Dinner. During a recent appearance on Sean Hannity’s Fox News program, Kellyanne Conway went off into this weird little diatribe about what happened Saturday night.

Take a look at the clip. It’s a little bit longer, but you got to watch it to the end, because this is really weird. She opens a can of worms that I don’t think she wanted to open. Take a look at that.

Kellyanne C.: Sean, in some ways, there was very little that was surprising on Saturday night, though. The faux outrage from some people who look down at Twitter all day long and see the likes of Sarah, and Ivanka, and me insulted, this just happened right in front of them where they were all gussied up, so they couldn’t deny it. I mean, in some ways, it was just another day at the office. They know that we’re insulted handedly, but it doesn’t make some people any less miserable or us any less powerful and dutiful to the jobs that we have on behalf of the country that we love.

I actually think both events Saturday night really helped President Trump. First, he got to go to Michigan and tout … he was in Washington, Michigan, touting-

Kellyanne C.: The economic progress of security, the historic nature of what’s going on in Korea. Then the event here in Washington helped him as well, because it fed right into all of the cynicism, the skepticism, that a lot of Americans have about the mainstream media writ large. They have a 14% approval rating.

Sean Hannity: Let me ask you this.

Kellyanne C.: Let me say something. I spent tonight trying to find out how much Michelle Wolf was paid, and nobody will give me a straight answer. I called three people who were on the dais who actually picked up the phone. No one will give me an answer. Two said that they had no idea. There aren’t any kinds of meetings like that, no expenditures-

Kellyanne C.: Well, no, but hold on. But hold on. The reason I say this is, we’re told this is a scholarship dinner. Yeah, she should pay for your entertainment, but I feel really badly for those students. The president and the vice president met them at the White House. They took pictures with them the other day. I had occasion all throughout-

Kellyanne C.: The weekend at different events to meet these scholarship winners. I feel sorry for them, because they were almost an afterthought that night. I don’t want anybody to say this was about them. This was about the First Amendment. When the President of the White House Correspondents’ Association stood up and said, “An attack on one journalist is an attack on all journalists-“

You know what, Kellyanne? You’re absolutely right. If an attack on one woman or two women, as you say, is an attack on all women, then let’s talk about attacks on women. Specifically, let’s talk about the attack from your boss, “I moved on her like a bitch.” How does that play out, because that to me, sounds like an actual physical, sexual attack on a woman. How about “Grab ’em by the pussy”? How does that play out when you’re feigning outrage over the fact that a female comedian made a joke about you?

There are real attacks on women happening in this country. According to at least 19 different women right now, some of those attacks came from your boss, unwanted sexual advances. But you just want to gloss over those. You’ve actually said that these women are just liars, that none of this is true.

But a comedian, somebody who was paid, and according to you, you can’t find out how much, but you damn sure want to know, she was paid to go up there and basically roast people. She spent a good amount of time roasting the press as well. But you, because it was on you personally for one joke, you can’t handle it. You’re willing to overlook the allegations of sexual assault against the President of the United States, but a female comedian making a joke about you, well, that’s just crossing a line, and something needs to happen here, right? That’s not how it works.

There are problems that women in this country face, and you’ve probably faced them too throughout your career. Those are the ones that need to be addressed, but you going after this woman for making a couple jokes, which she was paid to do, if that’s the biggest thing you have to be outraged at, then I’m actually jealous of you, because I would love it if I had nothing worse to worry about in my life than a comedian making a couple jokes about me.