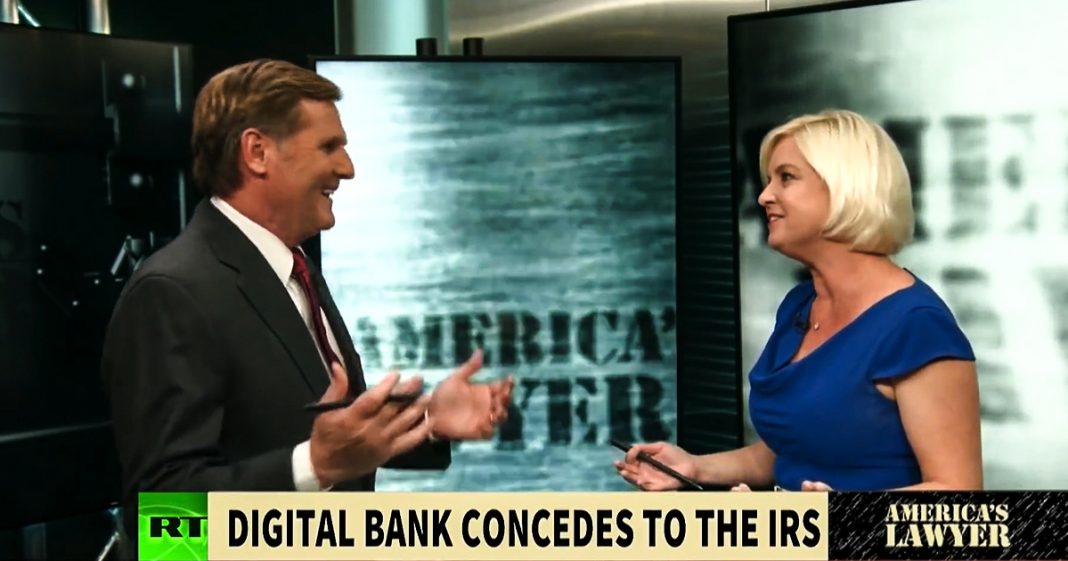 Via America’s Lawyer: Mike Papantonio and Mollye Barrows talk about how the IRS won its case to review thousands of accounts from the digital bank known as Coinbase.

Mike Papantonio: The digital bank Coinbase has agreed to hand over tax information on 13,000 accounts to the IRS. IRS says their focus is on Coinbase users who bought or sold more than $20,000 worth of digital currency. Coinbase, on the other hand, argued in court that the IRS made a request that was unwarranted against their customers and that the industry as a whole has been victimized by all this. Joining me to talk about all this is Mollye Barrows, legal journalist for the Trial Lawyer magazine. Mollye, why does the IRS suspect there’s something going on with a Coinbase kind of economy, bitcoin.

Mollye Barrows: Yes, so it’s a virtual bank of sorts. It’s one of the biggest in the world. In the short amount of time since 2011 when they were founded, you can make money off of trading these virtual currencies, whether it’s bitcoin or something else. So within a short amount of time, millions of accounts, millions of users, and in 2014, the federal government said, “Hey, this money that you’re making off of trading bitcoin and other currencies, that’s technically property and you should pay capital gains on it.” But because it’s virtual, because they use wallets essentially as an account holder. If you were Mike Papantonio and you wanted to start trading bitcoin, it would be called a wallet. In order to find out how much you’re actually making off of this, they had to request from Coinbase your wallet. That’s got all your identifying information. They were like you got all these millions of customers. We want to know how much money they’re making. It’s a little hard to manage because it’s not a federally regulated banking system so that they can’t … It’s easier to maybe evade taxes or do something nefarious.

Mollye Barrows: You’re supposed to report it. It requires self reporting.

Mike Papantonio: It’s not supported by really anything. If you … It’s an interesting thing. If you ask most people that are in this bitcoin business, how do I buy a pair of shoes?

Mike Papantonio: How do I use it? I got my bitcoins. How do I go buy …

Mike Papantonio: There is a way to do it. It’s not what I want to cover here thought. Look, the IRS … I’m so interested that the IRS has this interest. What is the scope of what the IRS is asking for? Why is it so unusual that they should ask, are you making money on it, because it is property, isn’t it?

Mollye Barrows: Right. That’s exactly what it is. They want to know if you’re making money off of it. Because it’s a virtual platform, you can easily get away with not self-reporting or not reporting it, so that’s why they wanted to see the data, but they literally have millions of users. I mean you’re talking upwards of 10 million, even recently. So when they first requested in 2014 for this information, they said we want nearly all of your account holder’s information, so you’re talking millions of customers and accounts, and Coinbase, was like, oh no. Back it up. We’re taking you to court. We’re going to fight this. Actually it was after the court heard it that there was a compromise of sorts and IRS was forced to narrow down the scope of their request significantly to just 13,000 account holders. It was, basically they wanted every single account that Coinbase had over a several year period, and it was whittled down to about 13,000 between 2013 and 15 and they made 20 grand or so in trades.

Mike Papantonio: It seems like it’s such a mystery that probably we ought to know, the IRS probably should have more information.

Mollye Barrows: Yes. And what I did find interesting, it’s a virtual banking system. Their goal is to basically make this throughout the world so you’re not accountable to any one country or currency and nobody has a monopoly.

Mollye Barrows: It does sound a little bit like a Ponzi scheme, doesn’t it?

Mike Papantonio: Yeah. Mollye Barrows, thank you for joining me.

Mollye Barrows: Thank you for having me.