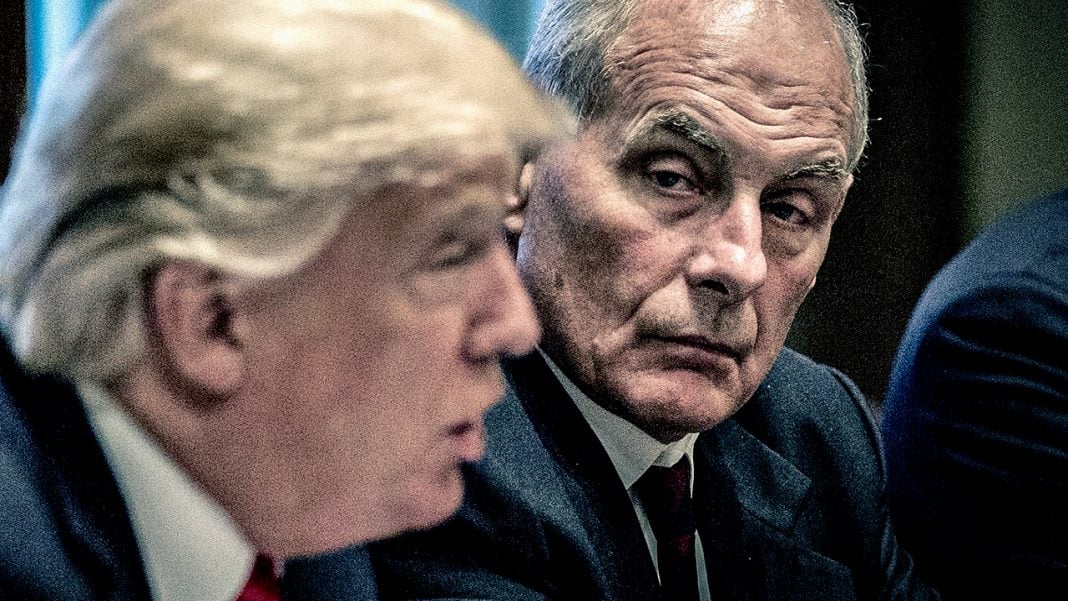 According to a new report by NBC News, 8 different White House sources have confirmed that Chief of Staff John Kelly has, on numerous occasions, referred to Donald Trump as an idiot, often criticizing the president for his disturbing lack of knowledge about policy issues. Kelly claims that this report is “BS”, but with multiple sources confirming it, it looks more like Kelly is the one full of BS, as Ring of Fire’s Farron Cousins explains.

On Monday evening, NBC News posted a bombshell news story where they had spoken with eight different staffers inside of the White House who all admitted that John Kelly, Donald Trump’s chief of staff, repeatedly, behind the president’s back, calls Donald Trump an idiot and often laments the fact that the man is so painfully stupid about policy issues that John Kelly is the only one saving us, I guess, from Armageddon or maybe the apocalypse or maybe some other kind of disaster. John Kelly honestly believes, according to these eight people who corroborated this story, that he is the only person saving the United States from the idiot that is Donald Trump. The aides also said, and this was also corroborated with former White House staffers, that John Kelly does not expect to still be at the White House past July of this summer. Now John Kelly immediately came out and he said this story is total BS. That’s what he said. “This is BS. I do not say this about the president.” Donald Trump tweeted out something he didn’t mentioned, Kelly.

But he said, “My administration’s running great. Everybody’s getting along. We’re doing great things. All those fake media reports are just that. They’re fake news. Everybody loves each other. Nobody’s being mean.” But I’m pretty sure that’s the exact same thing he said about Rex Tillerson when it was revealed that he called Donald Trump a moron and just like every other time when somebody in his administration has faced some kind of criticism or backlash or has been revealed to be talking bad about Donald Trump behind his back, Trump tweets out the exact same thing, like, “Everything’s great. Don’t worry about us. We’re doing fine. Everybody loves each other. I think we just had a birthday party the other day. There was a cake. It was wonderful.” Yeah. That’s not how it works. I am inclined to believe these different White House staffers who all said the same thing to interviewers over Donald Trump or John Kelly, two men who have made it very painfully obvious to the American public that they have a very real problem telling the truth. I do believe that John Kelly calls Donald Trump an idiot. Why?

Because Donald Trump is an idiot and he is painfully stupid about policy issues. I mean, here’s how manipulable Donald Trump truly is. It took four days of John Bolton being his national security advisor before we bombed Syria. That’s how impressionable Donald Trump is. All those things that everybody was warning us about were gonna have if John Bolton became a part of the administration literally happened within four days. So yeah, Trump has no original ideas when it comes to policy, either foreign or domestic. He just listens to the people around him and that’s why John Kelly believes that he, Kelly himself, is the only one protecting the United States from catastrophe. My guess at this point, as this story kind of picks up and gains more steam, people on Twitter are gonna mention it repeatedly to Donald Trump. I don’t even know at this point if John Kelly’s gonna make it to July. If he does, that’s going to be a miracle.

But if he stays in that office past July, then something has gone seriously wrong inside of this administration or Donald Trump is perfectly cool with the fact that Kelly thinks he’s an absolute moron just like most of the other people who’ve worked for Donald Trump.