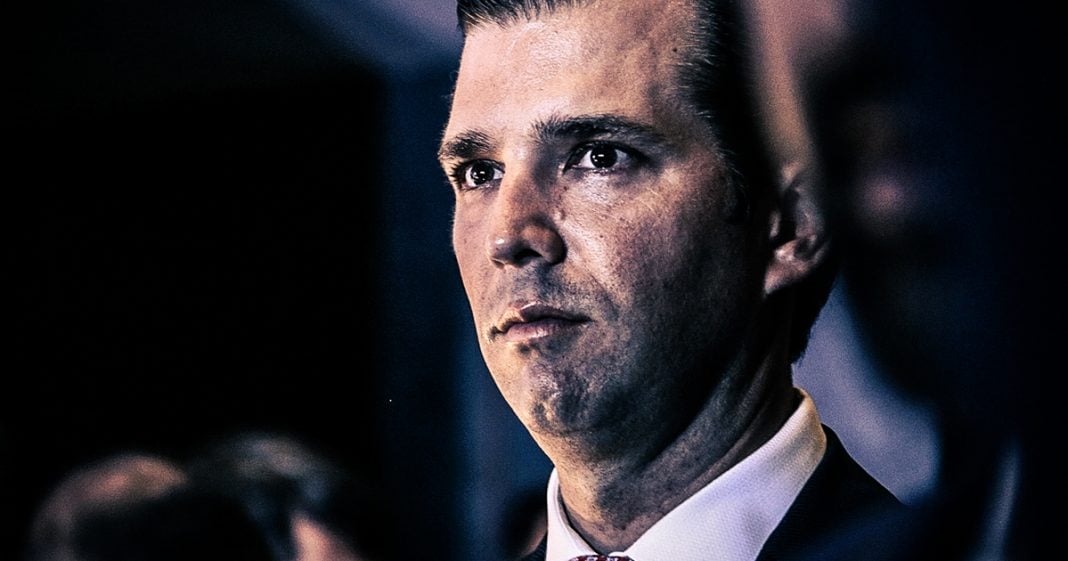 When Wikileaks reached out to Donald Trump, Jr. with a password to a website that neither owned, little Donny decided to test out the password to see if it worked. He later admitted, in an email that has been obtained by investigators, that he DID use the password to attempt to login to the website. This is illegal, and Trump admitted to doing it. Ring of Fire’s Farron Cousins explains what kind of trouble Trump Jr. finds himself in now.

Donald Trump Jr., the son of the President of the United States, accidentally admitted in an email, I believe last year, maybe even the year before, that he did, in fact, commit a crime. Here’s what happened. During the summer of 2016, Donald Trump Jr. and someone from WikiLeaks, we don’t know who, but somebody who had access to their Twitter account, sent a direct message to Donald Trump Jr., and said, hey, we’ve got a password for an anti-Trump website, putintrump.org, and you may be interested in that. Take a look around. Go log into the site. Look at who’s behind this thing. At the time, we never knew exactly whether or not Donald Trump used that password, that WikiLeaks claimed they just guess, and if he had, that would be committing a crime.

But as it turns out, in the recently released report from the House of Representatives about the investigation in the Trump administration, the minority’s report actually included an email from Donald Trump Jr. that said the following, guy, I got a weird Twitter DM from WikiLeaks. See below. I tried the password, and it works, and the about section they reference contains the next pick in terms of who’s behind it. I tried the password, and it works. So Donald Trump Jr., in that email, admitted to committing a crime. And in case you’re wondering, yes, people in the past have been prosecuted for doing that, for hacking into a website, logging into a website, even if given the password by somebody associated with the website that they don’t own. That’s illegal.

In most cases, as lawfair.com points out, that’s just a misdemeanor. But, under certain circumstances it actually can also be a felony. Those circumstances are, the offense was committed for purposes of commercial advantage, or private financial gain. Ah, questionable. The offense was committed in furtherance of any criminal or torturous act in violation of the Constitution or laws of the United States, or of any state. Ah. The value of the information obtained exceeds $5,000. The value of the information has to exceed $5,000. So, if they used any of that information to help Donald Trump get elected President, what’s the value of the United States Presidency? I’m going to put that at probably over $5,000. In all likelihood, Donald Trump Jr. did commit a felony, by his own admission in these emails that we have. And yet, the Republicans on the committee concluded that nobody in the Trump administration, nobody did anything wrong. We, for the life of us, can’t find anything because we’re just painfully stupid and incompetent.

All of the information is out there, folks. This is no longer speculation. This isn’t hyperbole. This isn’t, well, if we can connect the dots. Dots have been connected directly to the Trump family, and yes, Donald Trump Jr. has committed a crime. Will he ever face justice for it? Will we ever get answers for it? That’s a question that remains to be answered, but hopefully, in spite of the fact that he is both rich and white, hopefully, this will be one of the very rare occasions where somebody fitting that description actually goes to prison for breaking the law.