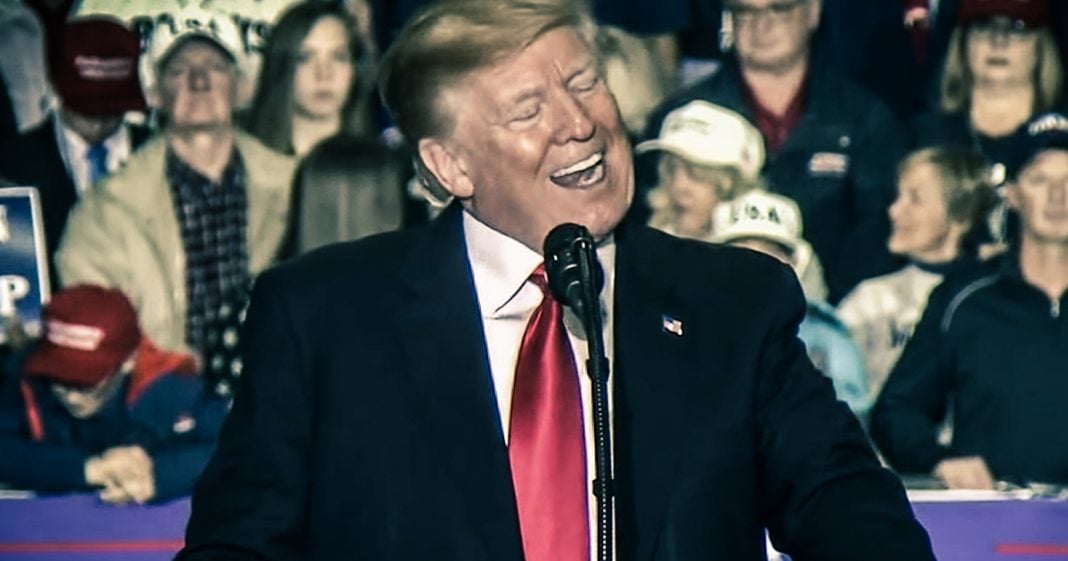 During a rally in Michigan over the weekend, Donald Trump warned the crowd that they’d better get out and vote this coming November, otherwise he’s likely facing impeachment. While a majority of Democrats DO support Congress impeaching the President, the fact that he’s using this as a campaign rallying cry seems to imply that he knows he COULD be impeached, which means he’s likely committed impeachable offenses. Ring of Fire’s Farron Cousins explains.

This past weekend, during a campaign rally I guess, in the state of Michigan, Donald Trump warned the crowd that if democrats win in this November’s midterm elections, they’re going to impeach him. He said that Maxine Waters, the democratic representatives has said as much, that if they get the numbers in the House, they’re going to begin impeachment proceedings. So Donald Trump says, “Republicans, if you don’t get out there and vote, and keep the House of Representatives, they are going to impeach me.”

Now I know that Donald Trump was just trying to energize his republican voting base and make sure they made it out there in November, but he also technically just admitted that he’s committed impeachable offenses, also known in the real world, as crimes. Because after all, they can’t just impeach you because they don’t like you, they have to have evidence that crimes were committed. If you’re concerned that they’re going to impeach you, then you must be concerned that they’re going to uncover the crimes that you’ve committed. That is the only logical conclusion that one can come to if you’re actually worried about being impeached. That means that you’re actually worried that we’re going to uncover what crimes you have committed. I don’t think that Donald Trump accidentally admitted to that.

I think Donald Trump knows full well, that he has plenty of things in his past that could easily lead to an impeachment. If democrats get their hands on the steering wheel of the House of Representatives, that impeachment goes from a long-shot, to a likelihood, and that’s the situation we’re looking at right now. But as we’ve seen from every toxic rally that Donald Trump has held around the country, the rallies tend to do more harm than good. The stupid things that Donald Trump says during those rallies, like, “The democrats are going to impeach me,” are often used against him, and used as fundraising measures for the Democratic Party, and they’ve done a pretty good job with it.

Meanwhile, whenever Trump shows up in a city, support for him kind of drops in the immediate aftermath of that. My advice to Trump, which is the same advice that Democratic Representative Ted Lieu gave him over the weekend, is to please continue doing these rallies, because you will inevitably say something incredibly stupid, that only furthers the chances of democrats taking back the House of Representatives, and then, as you so eloquently put it, starting with the impeachment process to get you out of office.