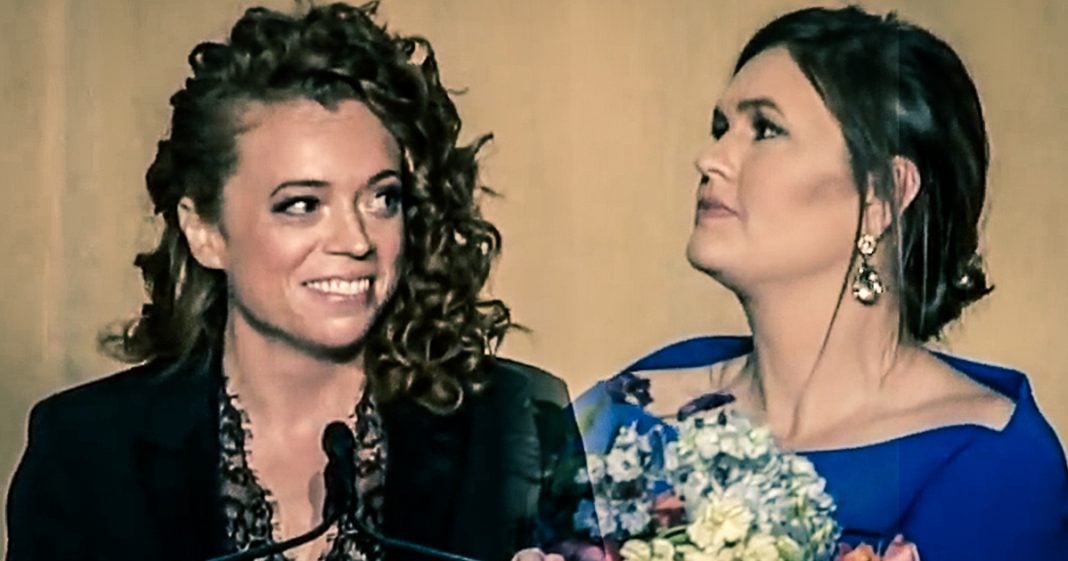 During the annual White House Correspondents’ Dinner, comedian Michelle Wolf took some shots at Sarah Huckabee Sanders, and conservatives immediately freaked out over the alleged attacks on Sanders’ appearance. But when you watch the clip, you realize that she actually wasn’t insulting Sanders’ looks, she was insulting her for constantly lying to the American public. Ring of Fire’s Farron Cousins discusses the faux outrage of conservatives.

This past weekend, the unthinkable happened and the unthinkable was that Sarah Huckabee Sanders got roasted at the annual White House Correspondents’ Dinner by comedian, Michelle Wolf. Now, before we get into all of the outrage about what Wolf said, let’s take a moment to actually see what Michelle Wolf said. Here it is.

Michelle Wolf: And, of course, we have Sarah Huckabee Sanders. We are graced with Sarah’s presence tonight. I have to say, I’m a little star-struck. I love you as Aunt Lydia in The Handmaid’s Tale. Mike Pence, if you haven’t seen it, you would love it.

Every time Sarah steps up to the podium, I get excited because I’m not really sure what we’re going to get, you know, a press briefing, a bunch of lies, or divided into softball teams. “It’s shirts and skins. And this time, don’t be such a little bitch, Jim Acosta.”

I actually really like Sarah. I think she’s very resourceful. Like, she burns facts, and then she uses the ash to create a perfect smoky eye. Like, maybe she’s born with it; maybe it’s lies. It’s probably lies.

All right, so there you have it. Pretty innocuous stuff, right, you know? She complimented her on her eyeliner. Yet Conservatives and even some Liberals, members of the press, the White House Correspondents’ Association itself, everybody has freaked out about what Michelle Wolf said about Sarah Huckabee Sanders as if she insulted her up and down for the entire evening, which isn’t at all what happened.

First of all, she compares her to the woman from The Handmaid’s Tale, the woman who’s in charge of brainwashing people, which is what Sarah Huckabee Sanders does every day when she goes out there and lies to us. Second, she said she burns facts and then used the ashes to create the perfect smoky eye. Now, I think Conservatives in their outrage are assuming that she was making fun of Sarah Huckabee Sanders’ lazy eye, but that’s not what smoky eye means, you idiots. She’s talking about her eyeliner how is that making fun of somebody’s appearance?

Furthermore, had she wanted to go even deeper and go after her appearance, I think that would be fair game. Why? Because Sarah Huckabee Sanders’ job is to go out there in front of the public every single day of the week and lie to us on behalf of a man who routinely, on Twitter and in person during campaign rallies, makes fun of other people’s appearances. She works for a man who openly mocked a disabled reporter. Republicans didn’t say a word about that. They seemed perfectly fine with it. They’re fine when he goes out there and attacks, as he calls him, “Sleepy Eyes” Chuck Todd. When he attacked Rosie O’Donnell for her physical appearance during the first Republican debate, they didn’t say a word.

This outrage is total BS nonsense by a bunch of Conservative snowflakes triggered by a comedian. That’s what happened this weekend. They’re not actually upset that she allegedly insulted Sarah Huckabee Sanders’ appearance. They’re mad because they need something to be mad about because that’s all Conservatives know how to do. That and, of course, cut taxes for the wealthy.

There was nothing in that diatribe that actually went after Sarah Huckabee Sanders’ appearance. She repeatedly talked about the fact that she lies all the time, which is the truth. Furthermore, isn’t that the job of the White House Correspondents’ Dinner? They make fun of politicians? I mean, they’ve made fun of everybody else’s looks. Not saying that that’s okay, but that didn’t even happen here.

Conservatives are freaking out and yet they have given Donald Trump a free pass on every single physical and personal insult that that man has lobbed against people all over this country, and Huckabee Sanders herself is not innocent either. She does the same thing. She attacks the press. She calls them fake news, insults their careers, insults their jobs. She was fair game at this White House Correspondents’ Dinner. If anything, Michelle Wolf’s attacks on her didn’t even go far enough.