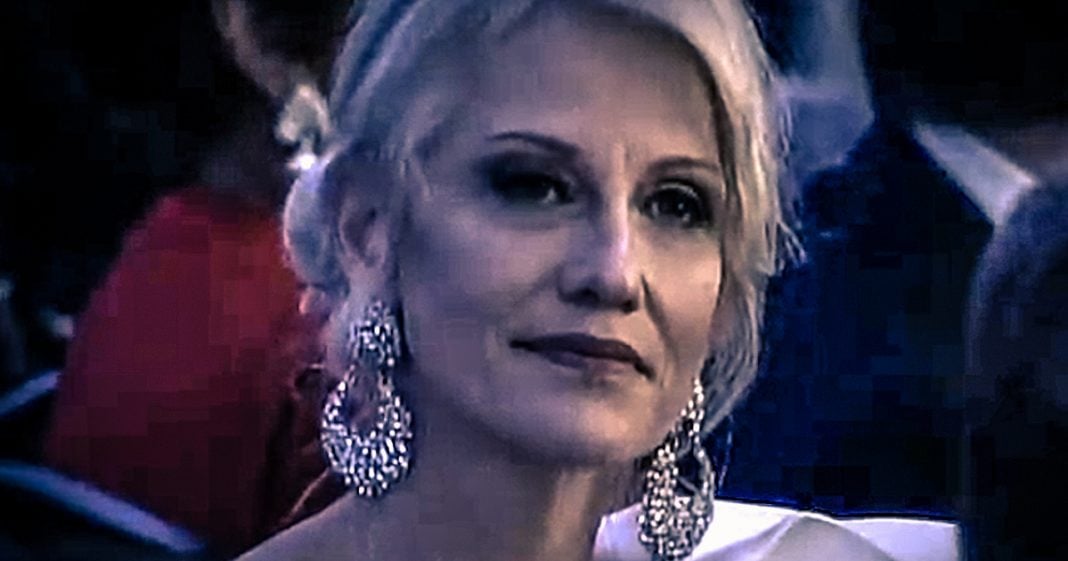 While the press has been focused on Sarah Huckabee Sanders getting her due at the White House Correspondents Dinner, no one seems to be talking about the roasting that Kellyanne Conway received. Comedian Michelle Wolf told the media to stop putting Kellyanne on TV, advice that all of the networks should be taking. Ring of Fire’s Farron Cousins discusses this.

While a lot of people, in fact most people who’ve been following what happened at the White House Correspondents’ Dinner this past Saturday evening have been talking about it in terms of Sarah Huckabee Sanders, let’s not forget that Kellyanne Conway was in the crowd and she also got a very good ribbing from comedian Michelle Wolf. Take a look not only at what Michelle Wolf had to say about Kellyanne, but what Michelle Wolf had to say to the members of the media who keep putting her on the air and then watch Kellyanne Conway’s response. Here’s the clip.

I don’t think I even need to say this because you just saw it. But Kellyanne Conway was super pissed right there. Her face just … That is a level of anger that I don’t think I’ve ever seen from Kellyanne Conway and here is the sad, sick truth. She absolutely deserved every bit of that. Kellyanne Conway, much like Sarah Huckabee Sanders, her job is to go out there as often as possible and lie to the American public, paint a happy face on this administration and convince us that it’s not a raging dumpster fire that we can all clearly see happening behind her. She sits there with a straight face and invents things that we can easily verify never happen like the Bowling Green massacre, and she has the audacity to sit there and act like she’s pissed off because she gets called out for it.

But again that’s not even the main part here. The main part is that Michelle Wolf is 100% correct. These media outlets that continue to put Kellyanne Conway on the air know exactly what they’re getting when they put her on. They know she’s going to lie about everything. They know she’s going to dodge any important questions, never tell the truth, never give us any insight on what’s actually happening in the White House and it’s going to kill in ratings. That’s why Kellyanne Conway gets to continue to go on TV and spread these lies because these people understand, the people who run the networks know that she’s good for business. They’ll put the clip online and get a million or two views in an hour because everybody wants to tune in and see the dumpster fire that is Kellyanne Conway going out there as often as possible saying some of the dumbest things that we have ever heard from an administration at least in my lifetime.

Michelle Wolf is right. If we want to get past this, we need to stop allowing these people to lie to us. We need to stop inviting these people on cable news programs so that they can lie to us just because they want the ratings. That is not good for journalism. It’s harmful to journalism. But more importantly, it’s harmful to the education of the American public. But Kellyanne Conway is always happy to go out there and dumb down this country for a few minutes at least once a week.