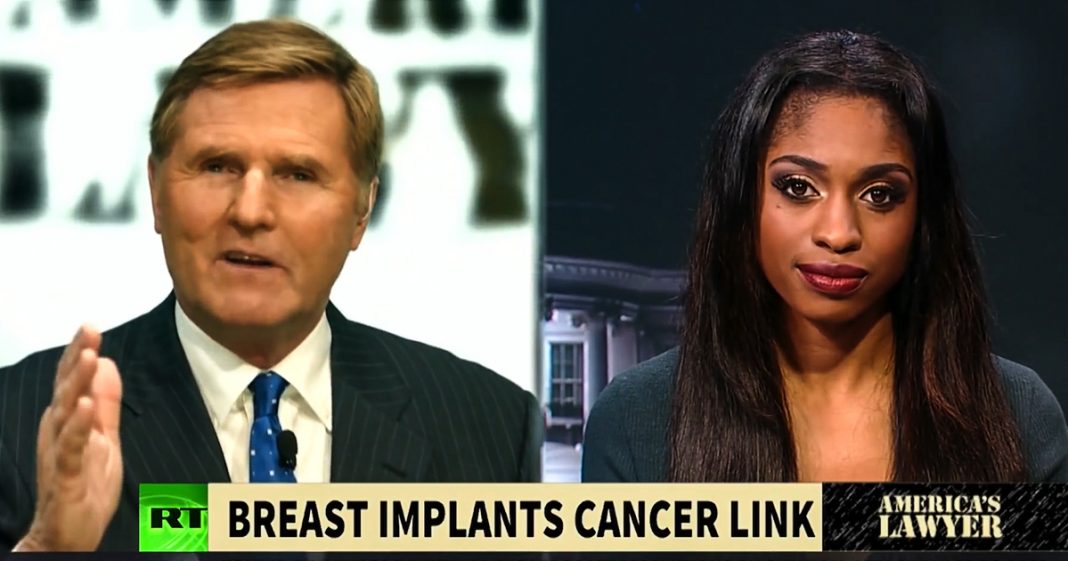 Via America’s Lawyer: Mike Papantonio is joined by Ashlee Banks to discuss how certain breast implants are linked to a rare form of cancer among women.

Mike Papantonio: A rare type of cancer linked to breast implants is on the rise, says a new report published in the JAMA Surgery Journal. Some of the women who received these implants are breast cancer survivors who needed the implants for reconstruction purposes, but despite the fact that the US government officially recognizes the link between this rare cancer and the implants, women are finding that some insurance companies aren’t going to cover the recommended procedure to treat the disease for a host of reasons. Joining me now to discuss this is RT correspondent Ashlee Banks. Ashlee, what is this cancer and how did medical experts discover that there’s a relationship between that and implants?

Ashlee Banks: Well, Mike, this cancer, it’s called breast implant associated anaplastic large cell lymphoma. It’s also abbreviated as ALCL. Now, it’s not a breast cancer. Many people are saying that it is, but contrary to popular belief, it is not. It’s a lymphoma that is a cancer of the immune system. Now, for years, researchers have known about this link between breast implants and this rare form of cancer, but previously to coming to terms with this, a lot of researchers weren’t finding the right answers to their questions, so they basically had to start asking different questions, and searching for women who already had this rare form of cancer and then from there, figuring out which of these women also had breast implants.

Here’s the problem I think that we’re going to see here, is that the industry is out buying science right now, just like they did 20 years ago. We won the cases, we settled the projects, we had, there were thousands of women who had these breast implants. The industry then said, “Well, we have new design, you don’t have to worry about this anymore.” We pushed back, we pled with the FDA, “Don’t believe these liars,” because that’s absolutely what they are. They’ve phonied up clinical data, they used some of the same phonied up clinical data to get these new products on the market, and now we see women are at risk of a cancer. How high is the risk that a woman could be diagnosed with these implants?

So Mike, as you can see, as women age, the women who do have these implants, they are more at risk for developing this rare form of cancer. However, the numbers still show women have a very low chance of developing the cancer, but researchers and physicians are warning women and saying you’ve got to do your research if you’re looking to get these breast implants for any reason at all, but they’re saying women need to know the chances and risk they have of developing this cancer.

Mike Papantonio: Ashlee, I may be a little more cynical than you, because I go to trial against people like these manufacturers all the time. This study that you just talked about probably when the depositions are taken, we’re going to find that the industry had money involved in that study. Most of the time, that’s what happens. The industry goes out and they hire what they call biostitutes. A biostitute is where you get three scientists that want to be paid $300,000 for doing a study and then gaming the study in a way that’s favorable for industry, and then they put it out here and then journalists say, “Oh, well this study said this.”

I’ve got to tell you something. Where it comes to a manufacturer making something like a breast implant that you’re putting in your body, you can bet on the fact that they are going to have control over the scientists and they’re going to have control over the narrative, just like they did the first time these things came … You understand, these things were basically removed from the market the first time they came out, and back then when I was handling those cases, I saw studies just like the one you read me, where they would give me these statistics and we started looking at the epidemiology analysis behind the statistics, and it was nonsense. It was all created for the industry so they could sell more products. Who are the manufacturers of the implants and how have they taken steps to warn potential customers of risks from surgery, if they have at all?

Ashlee Banks: Mm-hmm (affirmative), so there are about three huge breast implant manufacturers here in the US. I’ll name them. It’s Allergan, Mentor Worldwide, and Sientra Incorporated. Now, I want to read you a quote from a doctor. His name is Dino Ravnic. He’s an assistant professor of surgery at the Pennsylvania State University College of Medicine and he says, “All manufacturers of textured implants have had cases linked to this type of cancer, and we haven’t seen cases linked to smooth implants.” So after doing some research, it appears that most of these companies aren’t really warning their consumers about the possibility of getting this cancer, only because they’re saying there’s not enough information out there, enough detail, enough factual information claiming that these implants are directly linked to this rare form of cancer, and the FDA has said that it can’t even advise people to not get these implants because of the lack of information.

Mike Papantonio: Okay, two things you just mentioned again, I’m more cynical than you are because I’m sitting across the table with these people in trial all the time, and I’ve done that for 35 years. A, the FDA, you virtually cannot trust anything the FDA says right now, because they’re owned and operated by the industry. B, when the industry says, “Gee whiz, our clinicals show,” that they absolutely say, the only thing you can do is start taking depositions, the only thing you could do is actually get the clinicals themselves and most of the time, you’re going to see that those clinicals and the data that’s even submitted to the FDA is fantasy talk.

But anyway, let’s follow this story, Ashlee, as it develops. I’m calling this, I’m calling the further you get into this story, the more you’re going to find that the incidence of cancer is far higher than what we’re hearing right now. But thank you for joining me, okay?

Ashlee Banks: You are welcome.