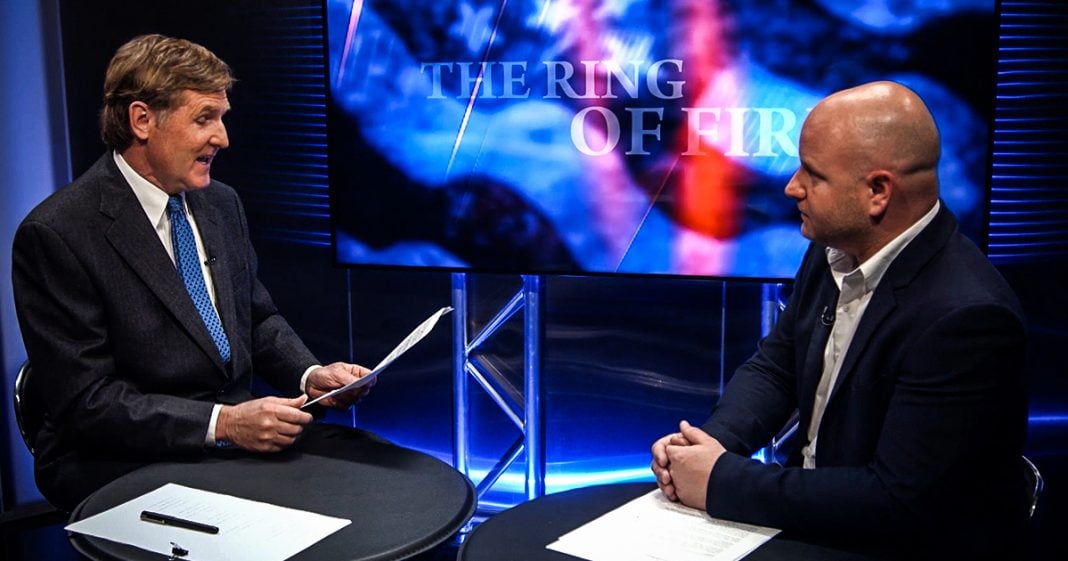 A new report shows that a leading Republican member of the House of Representatives has been meeting with banking lobbyists to discuss legislation to deregulate the country’s largest banks, and how to get more Democrats to come over to the dark side. Ring of Fire’s Mike Papantonio and Farron Cousins discuss this.

Mike Papantonio: A new report shows that a leading Republican member in the House of Representatives has been meeting with banking lobbyists behind closed doors, very secret meetings, to discuss legislation to do away with regulating the country’s largest banks. And now, this guy’s actually making pretty good inroads getting Democrats to come over to that dark side. His argument is that, “Gee whiz, we have to ignore all the horrible things that UBS and Wells Fargo does, and we have to ignore all those terrible things that they do. And we’re really looking out for mom-and-pop banks.”

What in the hell is a mom-and-pop … There aren’t mom-and-pop banks anymore. What’s your take?

Farron Cousins: I think this is a very interesting story because it kind of goes opposite of what we would usually think. Usually, it’s the lobbyists that come to the lawmakers and say, “Hey, if you could vote this way,” but instead, we have the lawmaker … representative Jeb Hensarling, who called the lobbyist there to the capital and said, “Can you guys please, please, I’ve got to get more Democrats on this. Go do what you do, and you go convince them.” But that’s the point-

Mike Papantonio: So, he’s a Democrat … a Republican.

Mike Papantonio: You got the regular Democrats, the Wall Street Democrats, who will do anything for big banks, hate consumers. I mean, it’s like they have hatred for consumers, like this Heidi Heitkamp-

Mike Papantonio: … I mean, why is it every time … Her goal, I think, is to make consumers’ lives as miserable as possible. This is all about more bank bailouts and rollback consumer protection. That’s the two parts of this. Let’s give banks, big banks, not mom-and-pop banks, there aren’t such things as mom-and-pop banks, let’s give those people, the big, big banks, a rollback in the way that we’re looking at them, and that’s what Dodd-Frank was trying to do. Dodd-Frank was just trying to keep us from having another burn down, you know?

Farron Cousins: And that’s … What this whole legislation is trying to do is redefine what makes a small bank and a big bank, and under the new rules that they’re proposing, if you hold less than 250 billion dollars, then you’re a small bank, and that makes you-

Farron Cousins: … and that makes you less subjected to all these stringent regulations like you can’t gamble with your clients’ monies and screw their pensions away for them.

Mike Papantonio: I want you, to put you on the spot, tell me the Democrats that you predictably would say are going to fall in line. We’ve got about 30 seconds. Who are they? Besides Cory Booker.

Mike Papantonio: That is amazing-

Farron Cousins: … but he’s … you’ve seen a big shift in him in the last few weeks, ever since Bernie became super popular, but I think the Manchin’sare obvious, McCaskill’s, that’s over the senate.