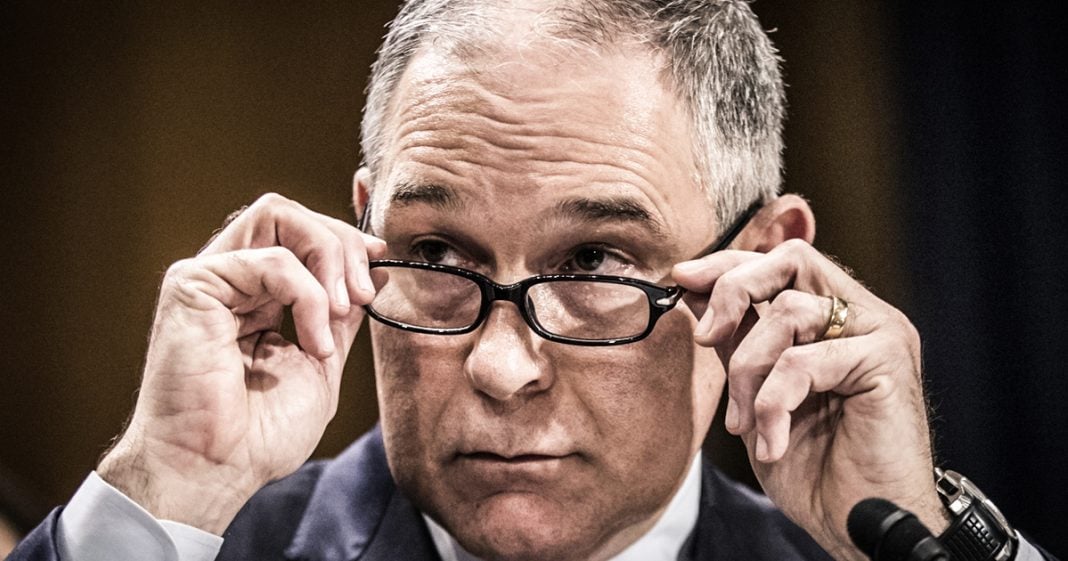 EPA director Scott Pruitt signed a new order this week that will allow the EPA to impose new regulations – or repeal old ones – without ever having to consult scientific data about the dangers of their actions. The new order has effectively banned actual science from the EPA, giving corporations a free pass to continue to poison our environment and ourselves, as Ring of Fire’s Farron Cousins explains.

EPA director Scott Pruitt has decided that he wants to make his agency a little more transparent for the American public. He believes that the public needs to know why the EPA is putting out certain regulations and why they want to cut other regulations. So this week, he signed an order with his office that, according to him, is going to make those offers a little bit more transparent, but here’s what it actually does. It doesn’t create any more transparency, all it says is that the EPA can only use information that has been made available to the public. They cannot use any scientific studies that have not been published or ones that are only available to a certain amount of academics, which, to put that in layman’s terms, means that Scott Pruitt the director of the EPA has basically banned science from being used in decision making at the Environmental Protection Agency.

Do you know what is available to the public right now? Scores of papers containing misinformation and falsified data about the harm that regulations cost to businesses. None of it’s true. Every credible study that’s looked into it says environmental regulations not only help the local economies where they’re put into place, but they actually don’t cost us a single job and create more jobs in the local economy. Regulations are good for business but businesses don’t want to have to pay a few extra dollars to make sure that they’re not sending poisons out on the air or dumping poisons in the water. And so, Scott Pruitt says, fine we’ll just get rid of science and then people can’t be mad at us when we make these rules or more importantly, repeal these rules that say, that hey, it’s okay to put some more mercury and arsenic in the air or put some cancer-causing chemicals in your water, because look at this study that I found from … Where is this? Heritage Foundation and they said it’s perfectly fine.

That’s what’s going to happen. That’s not speculation. That’s what’s going to happen because Scott Pruitt, I guess, just has this deep seated hatred for the environment. He has a deep seated hatred for the American public. That is the only way that you can describe a human being that wants to go out there in pump us full of toxins, just so corporations can save a few extra dollars every year not having to comply with certain regulations. He loves corporate profits and hates the American public. He may not ever say that but every decision that this man has made since coming in the office proves that without a doubt.