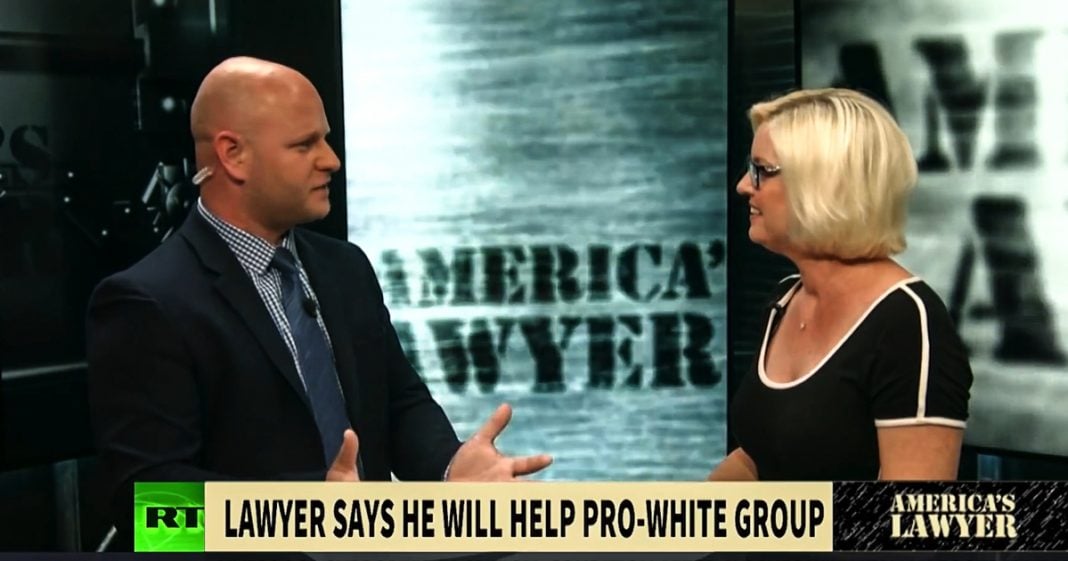 Via America’s Lawyer: Farron Cousins is joined by Mollye Barrows to explain why an Ohio lawyer decided to represent a white supremacist group in court.

Farron Cousins: A Cincinnati lawyer claims it’s his duty to represent a group of white supremacists because he believes “white people are the chosen people.” The white supremacists were having trouble finding legal representation for their case related to the violent clashes in Charlottesville. So this lawyer decided to step in and fight on behalf of their cause. Joining me now to talk about this is Mollye Barrows, legal journalist for The Trial Lawyer Magazine. Very interesting story here, Mollye. So who is this lawyer and why on earth did he make these comments?

Mollye Barrows: James E. Kolenich. He’s based out of Cincinnati and it looks like some of the organizers of the alt-right rally that, as we all know, turned violent in Charlottesville, Virginia. They are being sued in a civil suit from folks who say they basically disrupted their right to protest peaceful. A law student is part of that civil suit, says she was emotionally distressed by seeing the violence when she was just there to do a peaceful demonstration. Well, these alt-right organizers, as you might imagine, were having a hard time finding someone to represent them. Well, here comes our hero, James E. Kolenich. “Not only will I represent you, I believe in what you’re supporting. I believe in the message that you’re sending out.” He says, “I too believe that white people must save and preserve their civilization.” This is what he told the Cincinnati Inquirer about why he was representing these neo Nazis and these white supremacists. He said that basically white people are the chosen people, that they were chosen as a result of the New Testament, that he does not support hating other minority groups.

Farron Cousins: So, okay, these are some pretty … I’m gonna go with crazy statements that this guy is making here.

Farron Cousins: So do these violate any kind of ethics rules or anything or is he totally okay to go out there and say these things?

Mollye Barrows: Like so many other issues in this era, that we live in now of politics, it is now being debated. I don’t think there’s any clear cut answer to say that he definitely violated any ethics rules in his home state of Ohio because he’s a Cincinnati based attorney. Ethics rules do bar lawyers from basically discriminatory behavior that’s covered by legal grounds, same with the American Bar. They don’t want you to do anything that’s already illegal, discriminating by race, religion, sex, you name it. But they basically say that even though you’re not supposed to engage in any kind of behavior that’s discriminatory, this guy’s doing the exact opposite. So while it might be appalling for him to support this message and to support the message that these men are carrying, it’s not necessarily unethical. Hateful and disgusting, yes. Crazy, yes. But unethical, that’s one for some classes I think to debate.

Farron Cousins: So what’s been the reaction from the legal community on this? I mean, these people go to conventions together. They see each other around. Somebody had to have some kind of reaction, like, “Hold up, dude. You can’t do that.”

Mollye Barrows: Yes, and that’s just it. I think as long as they’re paying his bills, I think he can do it and so unless there’s some new law that’s passed as a result of this that says, “Hey, you can represent your client whether you agree or disagree as long as you’re behaving in a professional manner and you’re not violating any ethical standards.” If he’s not violating, they may have to make some rules that he can potentially violate by what he proclaims to believe. But it’s interesting. The Cincinnati Inquirer contacted the ACLU of Ohio and they said, “Obviously we think the speech is hateful and disgusting, what he’s saying. But we strongly support any person in their right to stick up for what they believe if there’s no action behind it.” So it’s one thing for him to say, “White people are chosen. I’m gonna oppose any un-Christian influence in our society.”

But as long as he’s not going and packing and shooting at people that he feels are un-Christian influences, then they’re willing to fight for his, or stand up for his right to believe what he believes, which obviously is what basically he was known for and there is another law professor out of the University of Cincinnati who wants to present this to her law students and be like, “Whatcha think? Is this ethical?”

Farron Cousins: Well, absolutely. They need to present that so they can get, “Let’s figure this out.” But Mollye Barrows, legal journalist with Trial Lawyer Magazine. Thank you so much for joining us today.

Mollye Barrows: Thanks, Farron. Good to see you.