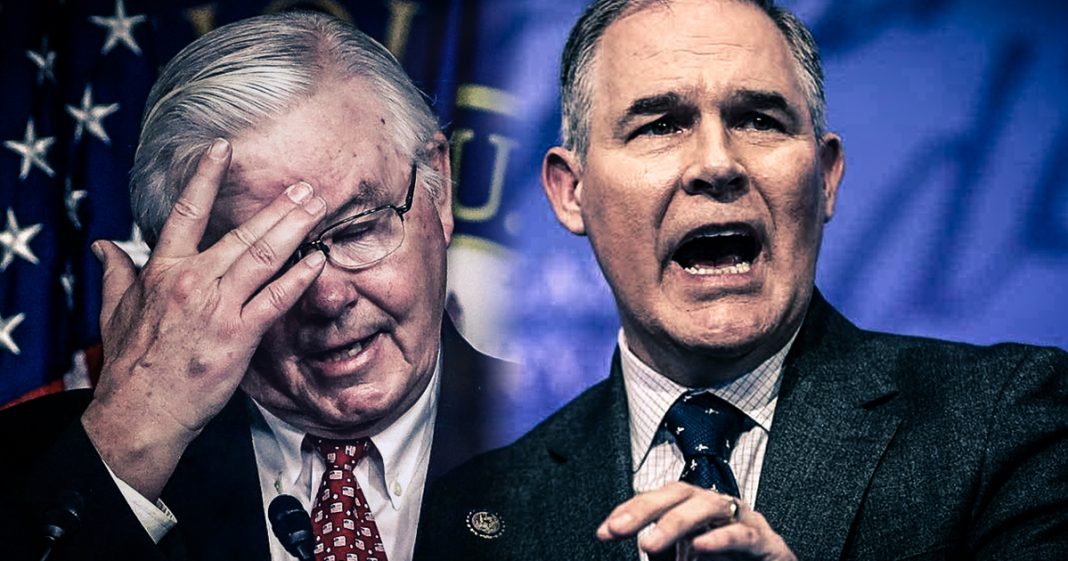 Republican Congressman Joe Barton is apparently still vying for the title of Dumbest Member of Congress Ever, and he proved that he might actually be worthy of that title this week during the testimony of embattled EPA director Scott Pruitt. During the testimony, Barton said that Pruitt was actually the victim, and if Obama hadn’t enacted a “RADICAL CLEAN AIR AGENDA,” none of this would be happening. Ring of Fire’s Farron Cousins discusses this.

On Thursday, the US House of Representatives called Scott Pruitt, the embattled director of the Environmental Protection Agency, to testify about all of the crappy things that this guy has done since he took over the EPA. And Rep. Joe Barton, Republican from the state of Texas, proved that he might actually be the dumbest and biggest piece of shit in the United States House of Representatives.

Quick backstory on Joe Barton, before we get into the stupidity that he had this past week. Joe Barton was the guy, who after the 2010 Deepwater Horizon oil spill from BP, apologized to BP because people were being mean to them because they just destroyed an entire ecosystem, killed 11 people because of their negligence, and Joe Barton thought that poor little BP deserved an apology.

Well, this week, he kind of did the same thing with Scott Pruitt. When it was her turn to question Scott Pruitt about all of the many spending scandals this man has amassed in his short time at the EPA, Barton said the following: “You’re the not the first person to be the victim of, for lack of a better term, Washington politics. You got picked to be the EPA Administrator because of the service you provided for the great state of Oklahoma in fighting some of the Obama Administration’s radical clean air policies.”

Where to begin, folks? First of all, Scott Pruitt is not a victim here, you idiot. Scott Pruitt broke the law by spending $43,000 on a soundproof phone booth so he could talk to members of the fossil-fuel industry without anybody hearing what he’s going to say, even though he was only allowed to spend $5,000, according to Congress, on office renovations. Illegal. All of his other travel scandals, they may not be illegal, but they’re sure as hell unethical.

Second of all, you wanna talk about Obama? You’re somehow trying to pin this back on Obama? What the hell is wrong with you? Why can you Republicans not move on from the Obama Administration? Hell, Obama didn’t spend this much time talking about George W. Bush after he took office. And to be honest, he could have. He could’ve prosecuted every one of them for war crimes, but instead chose to move on. That was a huge mistake, but he wasn’t as obsessed with the former administration as you people are.

You are without a doubt, Mr. Barton, the biggest piece of shit in the US House of Representatives, and I hope to God that the people in Texas somehow become smart enough in the mid-terms this year to vote your ass out.