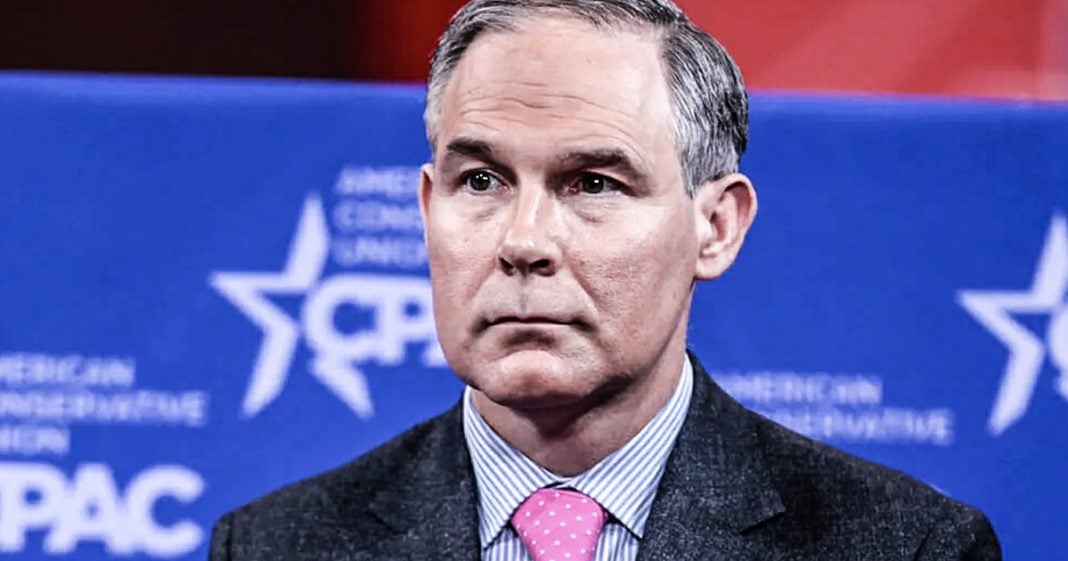 Trump’s handpicked EPA director Scott Pruitt is now the target of no fewer than 10 different investigations into misconduct, a new record for the Trump administration. At this point, anyone who believes that Donald Trump is still trying to “drain the swamp” needs to have their head examined, as Ring of Fire’s Farron Cousins points out.

Donald Trump promised us, when he came into office, he was going to drain the swamp. With every single decision that man has made since he came into office, he has proven to us that one, he either doesn’t know where to valve is to start draining the swamp, or two, he doesn’t actually know what a swamp is. If you need a good example, you need look no further than EPA Director Scott Pruitt. As Vice News recently, Scott Pruitt, as of this very second, is under no fewer than 10 different investigations for misconduct during his time as the Director of the EPA.

So, we’re talking about a little over one year Scott Director has been head of the EPA, and he has already under at least 10 investigations. The EPA told Vice that there’s actually a couple more investigations that have yet to be made public. Now, most of these investigations involving Scott Pruitt all center around his spending. Just last week, the Government Accountability office determined that yeah, Scott Pruitt broke the law when he spent $43 thousand on a sound proof phone booth for his office, when he was actually only allowed to spend $5 thousand on renovations to his office, before having to go to Congress to get approval.

Some of the other scandals. Pruitt giving raises to political staffers using a loophole designed to let the EPA Chief hire scientists without wading through bureaucracy. Pruitt spending $105 thousand of taxpayer cash flying first class instead of coach. Pruitt’s meeting with the National Mining Association. Pruitt’s security detail accompanying him on a trip to the Rose Bowl, and to Disneyland, and the fact that he has actually spent over $3 million since coming into office just on security. Now, what the hell is Scott Pruitt so afraid of? Is he afraid of running into somebody that he’s allowing corporations to poison? Is he afraid of the people who are going to develop cancer because of his backwards environmental policies, and his repeal of regulations? Is he so afraid of the people who are going to develop breathing disorders like asthma, because of the increased air pollution that he is allowing?

Is that why it’s going to cost us $3 million a year, apparently, just to keep this guy safe? If Donald Trump was serious about draining the swamp, and if Republicans in DC were serious about cutting back on government spending and government waste, they would have fired Pruitt immediately after the very first scandal came out. But no, they stand by him, because he is doing everything that corporations in this country want him to do. It’s not because they don’t like the spending, or because they’ve got a problem with it, or because they’re okay with it, or because whatever, it’s because he is doing everything Republicans have always wanted to do.

So, all of these little scandals that he is embroiled in, don’t matter for a second to them. As long as he keeps fulfilling that corporate wishlist, this little grifter is going to continue doing what he does best, and that is ripping off American taxpayers so that he can give everything possible to corporations.