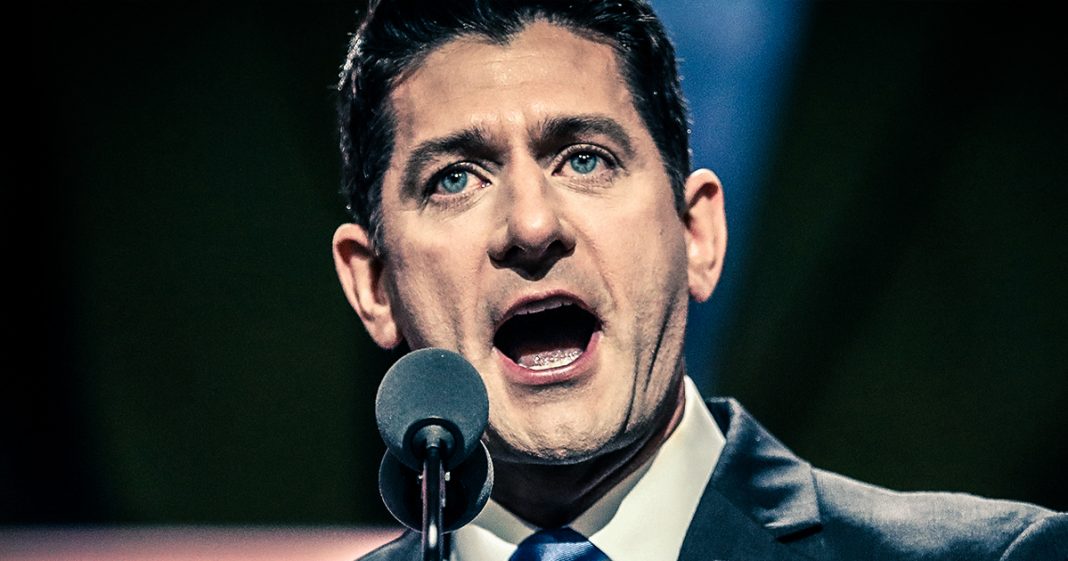 Patrick Conroy, the chaplain for the US House of Representatives, has been forced to resign his post, effective May 24th. According to members of BOTH parties, Conroy was forced out by Paul Ryan, and the general belief is that the forcing out was due to the fact that Conroy had previously criticized the Republican tax cut package last year. Ring of Fire’s Farron Cousins discusses this.

If you thought that Paul Ryan couldn’t get any more heartless, then take a listen to this. This week, Patrick Conroy, who is the chaplain of the US House of Representatives, the man who is in charge every day of going out there and leading the US House of Representatives in prayer, has been forced out by Paul Ryan. He submitted his letter of resignation yesterday, and in it he says, “As requested, here is my resignation, effective May 24th of this year.” Now according to four different sources, two from each party, Conroy was forced out of his position as a holy man for the House of representatives by Paul Ryan. A man who loves to throw his religion in everybody’s face fired a holy man, so the big question is why?

Well, according to bipartisan sources in the House of Representatives, it’s because Paul Ryan was getting paranoid that this House chaplain might be more in favor of Democrats than he is Republicans. In fact, Paul Ryan was increasingly upset with the fact that on November 6th of last year, when they were first debating the Republican tax cut bill, the chaplain gave a prayer that said the following: “May all members be mindful that the institutions and structures of our great nation guarantee the opportunities that have allowed some to achieve great success while others continue to struggle. May their efforts these days guarantee that there are not winners and losers under new tax laws, but benefits balanced and shared by all Americans.”

That prayer from the chaplain, the holy man of the US House of Representatives, pissed Paul Ryan off, because he understood what his tax bill was all about. It was about paying back the wealthy for funding his entire congressional career, and how dare this supposed man of God say we should take care of poor people too. Paul Ryan bided his time, and finally, when he decided he wasn’t going to run for reelection anymore, he was going to force out the chaplain of the House of Representatives who has been serving in that capacity since 2011, a guy that everybody in Congress, regardless of political party, seemed to like. Everybody had positive vibes about this guy. Hell, his only responsibility was going out there every day and just saying a prayer, but he got a little too political, because he actually believed in the Bible and thought that Congress should make sure that they take care of poor people too.

Apparently, for Paul Ryan, that’s the line that you cannot cross, even if you’re a holy man, and even if that’s literally what the Bible tells people like Paul Ryan, who claim to follow the Bible, are supposed to do. Paul Ryan is a lying, hypocritical piece of crap, and I cannot wait until the day that he is no longer the Speaker of the House and a member of the House of Representatives. His political career is long past due to go away, and this little story here about him firing the chaplain because he was mad that he criticized the tax cuts, is only further proof that Paul Ryan has absolutely no heart and certainly no soul.