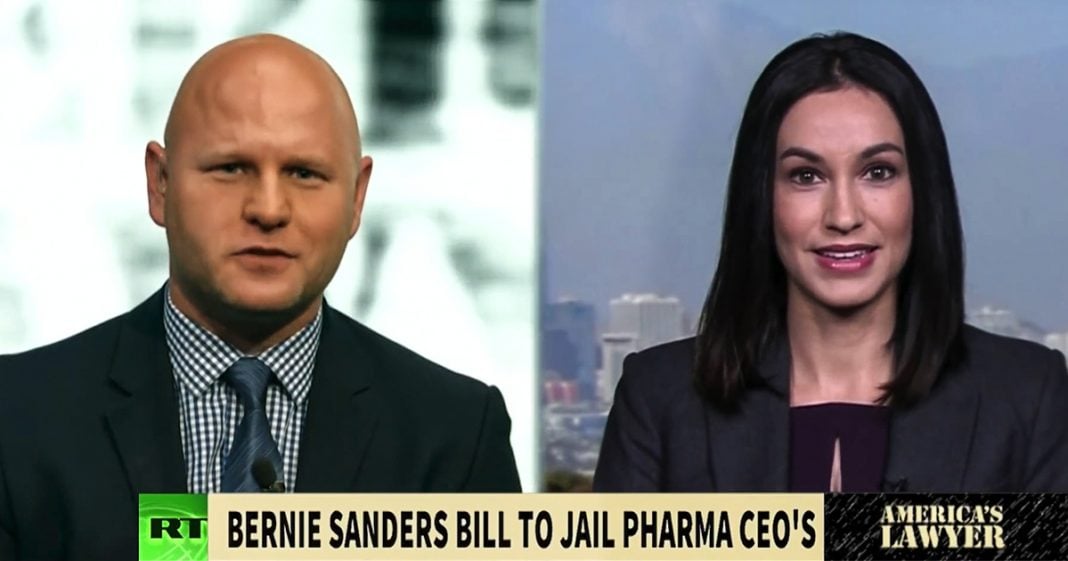 Via America’s Lawyer: Farron Cousins and Brigida Santos talk about a new senate bill that aims to throw pharma executives in jail.

Farron Cousins: Senator Bernie Sanders says he’s going to introduce a bill that will send big pharma executives to jail. The bill will state that any pharmaceutical CEO that’s found to have used manipulative tactics to market their drugs, they’re going to go to prison and pay huge fines.

Brigida Santos: This is the Opioid Crisis Accountability Act, and what it’s doing is putting a ban on deceptive marketing practices claiming that opiates are not addictive or risky. Now, this is a really important move, because it is exactly these deceptive marketing practices that have allowed the industry to profit so heavily from opioids, and, in fact, Purdue Pharma in the 1990s began spreading lies about its products saying that chronic pain users, only 1% of them became addicted, but that simply was not true. Since the 90s, the pharmaceutical industry has made 300% increase in sales due to those lies. So, this bill would make sure that any company that violates these marketing rules will have to pay a fine of 25% of all of their profits made on those illegally marketed opioid products.

It will also make it so that executives face criminal charges and could face a minimum of ten years in prison for participating in this. And last, but not least, this strips pharmaceutical companies of their market exclusivity rights on those illegally marketed products.

Farron Cousins: Just a point of information here, Rudy Giuliani actually was the guy who in ’06 represented Purdue Pharma when they were brought up for having mismarketed the drug, lied about the addictiveness, and he did such a phenomenal job defending them that they had to pay almost, I think it was a $700 million settlement, and were still involved in that kind of litigation today. So, yeah, bang up job there by Rudy Giuliani. Shows you the kind of scruples that that guy has.

But anyway. You know, what has been the typical way up til now that these pharma executives have been dealt with over the opioid crisis that they actually created?

Brigida Santos: Well, the typical way that we deal with them is give them a slap on the wrist, ask them to pay some fines, but they don’t face any jail time, so this would hopefully remedy that if it passes. Now, in the past 25 years, the pharmaceutical industry has only had to pay out $35 billion in fraud lawsuits and settlements regarding opioid abuse practices, and this is a $450 billion per year industry, so if that’s all they’ve had to pay over the last quarter of a century, this is just the cost of business for them. It’s really not costing them much, and they keep getting away with it. So, under this new bill, companies would also have to pay $7.8 billion in fines to the federal government, as well.

Farron Cousins: So, they’ve ended up actually paying less in fines than they do for marking these drugs and sending out their sales forces to go talk to doctors about prescribing more of them.

Brigida Santos: The Trump administration has acknowledged this crisis, and attorney General Jeff Sessions has actually just proposed regulations that would limit how many opioids a company can start doling out. However, the main approach of the Trump administration is to go after illegal drug dealers, whom he says he wants to impose the death penalty on. He says that they’ve killed 2,000 people over the course of their lifetime, but he has not said anything about sending pharmaceutical executives to jail or to the death penalty for their role. You know, 42,000 people in the United States died of opioid overdoses in 2016 alone, so that’s really crazy that he’s not going after the executives here.

Farron Cousins: You know, I want to circle back to something you touched on earlier about the mismarketing in the 90s. What do we know so far about how these opioid drug companies maliciously pushed their drugs onto people? You know, in other words, what are the grounds for believing that they should be held responsible for manipulating the data regarding the addictiveness of these pills?

Brigida Santos: Well, it’s not just that they’ve lied and manipulated data, they also have long practices of over supplying communities. In fact, the Center for Disease Control and Prevention says that in many counties, pharmacies have prescribed more prescriptions for opioids than they actually had residents, or enough to provide every single resident with more than one bottle. So, they’re overprescribing, they’re absolutely responsible for doing this. We have given corporations personhood, but they are not people, they don’t care about people, and they don’t care that people are dying. Instead, they care about their wallet, and this will definitely hit them right in the wallet.

Farron Cousins: Absolutely. I guess the big question of the day, though, is, what are the chances that this bill is even going to make it onto the senate floor for a vote?

Brigida Santos: Well, if this weeks vote on the Senate Health Committee’s bipartisan Opioid Crisis Response Act of 2018 vote is any indicator, then it’s unlikely. In fact, Senator Sanders had proposed two amendments with these very rules to that bipartisan bill, and this week it was just voted down. He did gain some support from some Democrats, but if he doesn’t get more support from other Democrats or from the other side of the aisle, then it’s really unlikely that this is going to pass.

Farron Cousins: You know, not just on this opioid issue, but it really gets frustrating time after time to see Bernie Sanders coming up with these great ideas, these great pieces of legislation, only for both the Republicans and almost all of the Democrats to just continue to ignore things that, one, make complete sense, and two, the majority of people in this country actually want to see them made into laws. So, once again, Bernie Sanders gets it right, but nobody else, or at least not enough people in the senate, have enough good sense to follow his lead and do what’s necessary to really tackle what’s at the heart of this opioid crisis in the United States.

Brigida, thank you very much for joining me today.