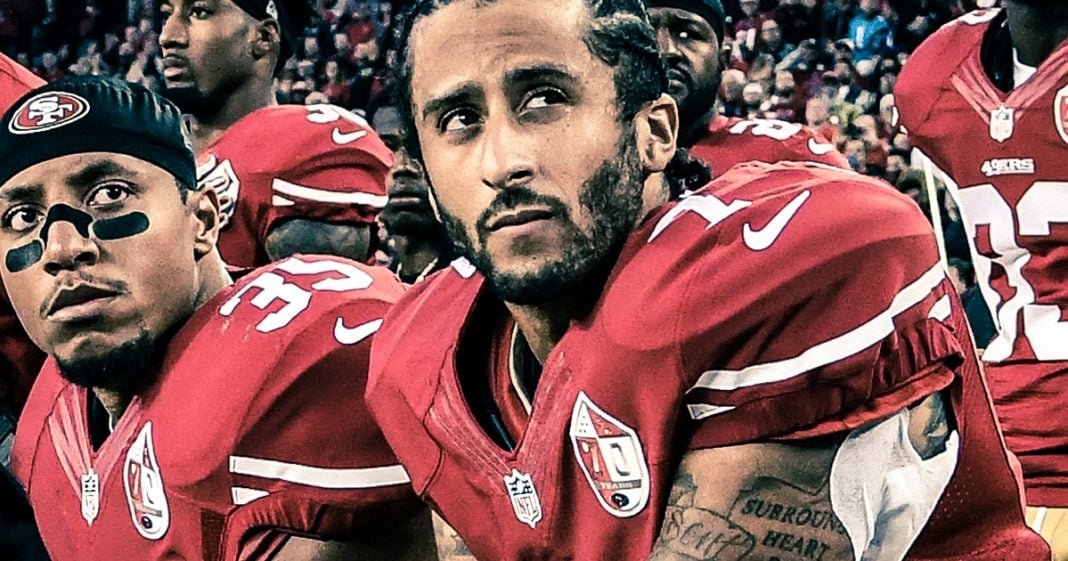 The New York Times has released a bombshell story based on leaked audio recordings that proves that NFL owners decided to keep Colin Kaepernick out of the league in order to appease Donald Trump. They were so concerned about the President’s attacks on the NFL that they decided to punish a man for using a few minutes of his time to protest a very serious issue. Ring of Fire’s Farron Cousins discusses this.

According to a bombshell new report by the New York Times in which they received leaked audio from an October meeting of NFL Commissioner, Roger Goodell, and about 30 NFL team owners here in the United States, they’re reporting that these NFL owners and the NFL Commissioner conspired together to blackball Colin Kaepernick so that he couldn’t be signed with any team, all in an effort to appease Donald Trump.

So these NFL owners and the Commissioner of the NFL himself, they were at this meeting according to the audio obtained by the New York Times, and they began discussing Donald Trump’s constant attacks at the time on the NFL and Colin Kaepernick, and how horrible it was that people were kneeling for the national anthem; that they weren’t standing up for the flag and respecting the United States.

Um, in reality as we all know, it had nothing to do with that. Kaepernick was protesting the police brutality that we see in the United States specifically targeting African-Americans, so he took a knee. And the NFL leaders, the owners, the Commissioner, they didn’t want to have to deal with Donald Trump’s angry tweets anymore, so they decided that the best way to do it was to just not give Colin Kaepernick a job. Now I don’t know if anybody else follows the NFL, but there’s a lot of teams, especially through this 2017 season, that really could have used a good quarterback. But instead of signing him, instead of letting him go to a team, there was a concerted effort to prevent him from playing football.

Now Colin Kaepernick has a very strong legal case at this point, especially with the release of this audio. If he moves forward with his lawsuit, he absolutely will win. I mean, that’s not questionable at this point. We have the evidence. But it goes even beyond that because this isn’t just about Kaepernick, this isn’t just about the NFL. This is about Donald Trump inserting himself into an industry, a business, that he had absolutely no business being involved in in the first place. But he got involved, he bullied them, he intimidated them, and then these owners bowed down to him.

In fact, most of them actually are Trump supporters anyway, or at least they were at one time or another. But that’s the threat of Donald Trump. If he sees that it worked with the NFL — which, unfortunately, it did — what’s to stop him from doing the same thing in other industries and tanking them? Getting CEOs fired? Getting average workers fired? That’s what’s going to happen. That’s the ripple effect that this story is going to have.

Donald Trump is not a good person. He’s not a decent person. He’s not even a nice person. He is possibly one of the worst people in this country that we could have as the President of the United States. He is petty, he is spiteful, and he is vindictive. And he, at least according to this leaked audio of the people involved, is directly responsible for Colin Kaepernick still not having a job in the NFL in spite of the fact that he is overly-qualified for those jobs.