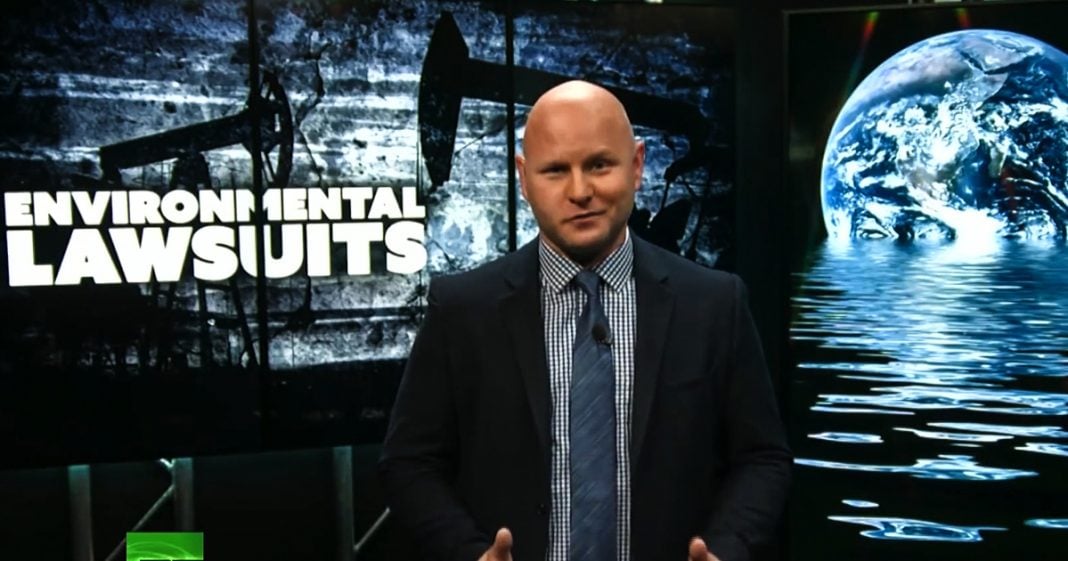 Via America’s Lawyer: Farron Cousins and Holland Cooke talk about kids who are suing Gov. Rick Scott for his inaction on climate change.

Farron Cousins: Last week, a group of children and young adults, represented by a group called Our Children’s Trust, filed a lawsuit against Florida governor Rick Scott. The lawsuit claims that the governor’s inaction on the issue of climate change has left huge areas of the state, including some of the most heavily populated areas, vulnerable to rising sea levels that are already threatening areas like Miami and Key West.

This lawsuit represents the latest round of litigation aimed at forcing politicians from the state to the federal level to finally take action on the issue of climate change. And a good portion of these lawsuits are being brought on behalf of the youngest generation of American citizens.

Our Children’s Trust is also representing young Americans in lawsuits in the Western part of the United States, and areas where the rising sea level will present a massive challenge to survival for this upcoming generation.

But it isn’t just coastal areas that are joining the legal fight against climate change. Inland states are also feeling the effects of endless fossil fuel emissions, and they too have decided to take some of the largest polluters in this country to court. From Colorado to Florida, Oregon to New York, and everywhere in between, climate change is a threat to our very existence. The science has told us this, the internal documents uncovered from oil companies have told us this, and the majority of people in this country, regardless of party affiliation, all agree on this.

Joining me now to discuss this issue is Holland Cooke, host of the Big Picture, right here on RT America.

So Holland, let’s start with the state of Florida here, what can you tell us about the lawsuits against our governor, Rick Scott?

Holland Cooke: Well, I think it’s dramatic that teenagers are doing this, particularly on the heels of this Parkland shooting thing, where the kids have carried the message forward as dramatically as they have. And somebody’s got to, if the grownups can’t fix this, the kids are going to have to, because it’s their future we’re dealing with.

And you hit a nerve when you talk about the coastal areas, because you’ve tracked me down where I live, in Rhode Island, the ocean state, which is also home to the USA’s first off shore wind farm. We take this coastal area stuff very seriously here, and less any of your viewers think that this is alarmist rhetoric from tree huggers, I refer you to the Wall Street Journal, no lefty rag, and the headline says “The Rising Seas Are Reshaping The Miami Home Market.”

So, few areas are going to be impacted less than where you are in Florida.

Farron Cousins: These suits being filed in the state of Colorado, these are slightly different. Both a different argument, a different group bringing the suits. So what can you tell us about the issues in Colorado? They’re not dealing with rising sea level, so what is their grievance here against these oil companies and politicians?

Holland Cooke: Yeah, there’s two wrinkles to the Colorado story that are different from Florida, and I’ve been following this fascinated because of what you said, it’s not coastal, it’s a mile high. But climate change affects them too, ecosystems, agriculture, certainly tourism, the ski industry is huge in Colorado.

And in the next few decades it’s been estimated, from what I’ve read, that the economic impact could be like $100 million or so. And the other difference between the Florida action and the suits in Colorado is in Colorado it’s communities, municipalities, filing suits against the fossil fuel companies about the impact of climate change. City and county of Boulder, county of San Miguel are proceeding against ExxonMobil and Sun Core.

So this is the first limited liability suit that has been filed about climates that is not a coastal area. So these are both fascinating developments to watch.

Farron Cousins: You know, earlier this week I saw that Fox News tweeted out a story talking about the fact that oh, if we allow these lawsuits to go through, it’s going to be damaging for the oil companies. But recently, documents were released showing that the Shell oil company knew about the dangers of climate change as well their role in it since at least the 1980’s, which is actually similar to the documents from a few years ago that show that Exxon was also well aware of the threat of climate change long before the public understood the risk.

So, do you think that these new documents that we’ve got could help the courts force these companies pay up for the damage they’ve caused?

Holland Cooke: Hey, let’s hope so. Remember the suits from the cigarette companies said “We don’t cause cancer.” What do you expect to hear from the oil companies? Don’t go throwing any dinners for them, because they are taking plenty of money from Uncle Sam. What they should be investing in, instead of oil, is energy. This is the fastest growing sector in our entire employment landscape, renewable energy.

And there’s a lot to be done there, rather than leaving our sustenance to the whim of geopolitics and weather and all the market manipulation that the oil companies themselves are suffering.

So, I think it’s a wall of noise, and that these lawsuits, particularly because they are being brought by children, do have a hope of attracting attention.

Farron Cousins: And what’s really interesting about these lawsuits too is in the past I’ve had a lot of people ask me “Why can’t we just sue these people for causing climate change? Why can’t we do this?” Well, it’s because you’ve got to have standing. You’ve got to be able to show that the actions of company or person X affected person Y with result of Z.

But these children, because the science has evolved so much in the last few years, they’re able to do that. They’re the ones who are going to be affected the most by this, and they absolutely do have standing. But, because of the inaction in DC, under both democrats and republicans hear, are these lawsuits the last best hope that we have to enact any kind of meaningful climate policy here in the US?

Holland Cooke: I hope not last best, but you put your finger on something when you talk about the students. As we’ve seen after the Parkland shootings, they attract coverage, and we’ve got a message that has to come out. So I think that that is fundamental to the effectiveness of this effort, is that we’re finally listening to reason.

Farron Cousins: You know, when you talk about the children here, a lot of these lawsuits are being brought by children, Our Children’s Trust is representing them. We’re seeing the same group take the lead on the issue of gun control, as you pointed out. So seeing how energized and mobilized this young generation has become, should we be hopeful about the future? Is there going to be real change on any issue here in this country any time soon because of what these children are doing now?

Holland Cooke: Yes, soon, for fairly undramatic reasons. As a consultant, I’ve learned to use the word demographics carefully, because people start yawning, but all these kids are now turning voting age. So they have the ultimate power, and in the mean time, as you know, when these lawsuits go forward, we have discovery. We have request for production of documents. We have depositions.

So the oil companies can’t hide forever. This stuff is going to be on the record.

Farron Cousins: And it’s really great too that on the environment issue, on the gun control issue, it’s not just going out there and saying “All right we’re going to sue this group,” or “We’re going to have one march.” These groups, and on several other issues, have become active, they’ve stayed active, and they’re not going away. They’re not letting go of these fights, because they understand on every one of these issues that they’re fighting for, whether it’s an increase in the minimum wage, environment protection, gun control. These are issues that affect them for the rest of their lives.

They can’t let this go, because this is their future. They’re trying to build a better country than what we’re handing to them as a new generation of voters. And you really can’t talk though about environment policy today, without bringing up the EPA administrator, Scott Pruitt. Last week we had more than 100 members of congress come out and call on Scott Pruitt to resign, but not one single republican actually joined in those calls for him to resign last week. What’s your thoughts on this entire Scott Pruitt thing? I mean this is getting to the level of just being absurd at this point.

So if I’m Scott Pruitt I am not, as they say, buying any green bananas.

This is the Koch agenda, the Exxon agenda, the Chevron agenda. As long as he does that, it doesn’t matter what kind of scandals he’s involved in, right? They’re going to go along with it because he’s doing the things they’ve always wanted to do.

Holland Cooke: Until he is politically disabled, or it is opportune for the president to, as I say, divert attention and make a change. The swamp is deep there, and when it’s handy, he’ll be gone.

Farron Cousins: What’s really interesting about this is that the only swamp that these republicans in power today seem to want to protect is the one that Trump himself is creating in the White House. There was no drain the swamp that actually happened, you pointed out the fact that Dr. Ronny Jackson, we’re now finding out from the senate committee, trying to look into his background, that oh, he liked to get a little tipsy while at work and overmedicate people, over prescribe drugs.

Farron Cousins: And that’s what we’ve come to expect from DC today. It is a caricature of itself, and unfortunately I don’t see this ending any time soon. But anyway, Holland Cooke, host of the Big Picture here on RT, thank you very much for joining us today.