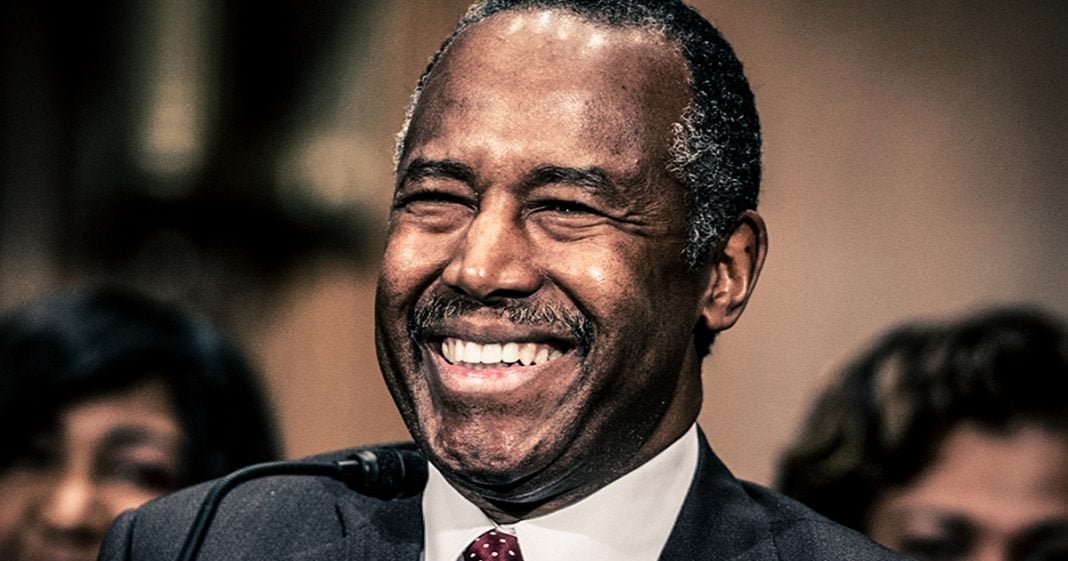 Ben Carson, Secretary of Housing And Urban Development, has unveiled a new plan that will require people receiving federal housing subsidies to pay even MORE money for their rent – in many cases low-income tenants will see their rent triple. He also wants to impose work requirements for recipients, further proof that Republicans believe anyone that is poor is just lazy. Ring of Fire’s Farron Cousins discusses this.

Ben Carson, the Secretary of Housing and Urban Development, has unveiled a new policy at HUD that’s going to triple the rent, the amount of rent that about four and a half million American citizens currently have to pay. Oh, and by the way, all of those four and a half million Americans who are about to see their rent tripled, they all happen to be low-income American citizens. Under the new policy proposal, HUD is going to make people who are getting federal housing subsidies, or who are living in federal housing projects, they’re going to reevaluate the equation being used that determines how much money these people pay out of their pockets versus how much comes from the federal government. And in doing so, it’s going to result in some people seeing double or triple the amount coming out of their own pocket to pay for their housing.

They’re also wanting to implement work requirements for anyone receiving or living in these federal housing projects, or if you receive the federal housing subsidy. They’re going to make sure that you work, regardless of your ability to be able to work. And the icing on the cake here is that they want to no longer factor in other costs or expenses that you may have, like childcare or medical expenses. So basically, the people in this country who need the most help are going to get even less help from the federal government under Ben Carson’s new proposal. They don’t care how much you have to pay in your medical bills, they don’t care if you have childcare costs because you have to put your child in daycare so that you can go work, but you’d better still work.

That’s what’s happening under the Trump federal government. Do you know why? Do you know why all of this is happening right now? Because we have to cut these programs. We have to cut, cut, cut, because we just gave the wealthiest Americans in this country a $1.5 trillion tax cut. This is what happens with trickle-down economics, not just that the American workers don’t see anything, but that we have to then go and cut vital services for the neediest Americans so that we can give rich people more money.

That is the state of the United States today under the Trump administration, under Republican rule. This is what they want to do, and they’re not going to stop at HUD. Paul Ryan has already made it clear that Social Security, Medicare, Medicaid, all of those cuts are coming in the very near future. So what Ben Carson is doing at HUD to poor people all over this country, four and a half million of them, is nothing compared to what this administration and the Republican Party want to do to the rest of this country that is just struggling to get by.