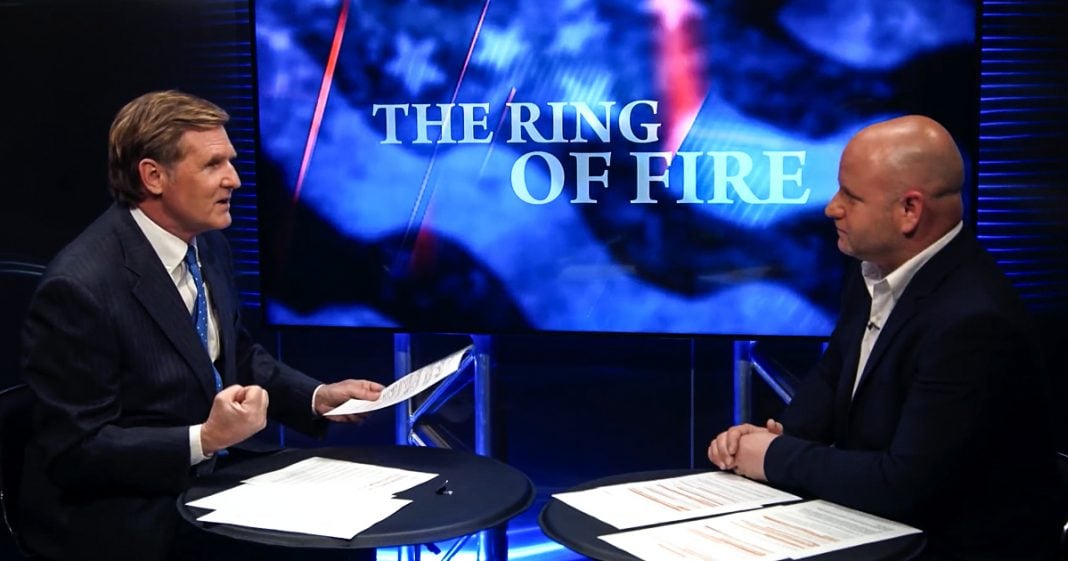 Yelp argued before the California Supreme Court last week that it shouldn’t have to comply with a court order to remove a one-star review of an attorney, written by a disgruntled client because that client was not a party to the initial defamation lawsuit between the two. Ring of Fire’s Mike Papantonio and Farron Cousins discuss this.

Mike Papantonio: Yelp argued before the California Supreme Court last week that it shouldn’t have to comply with a court order to remove a one-star review of an attorney, written by a disgruntled client because that client was not a party to the initial defamation lawsuit between the two. Here’s the point. I read the story. And I’m thinking, what kind of lawyer, where their practice rises and falls according to Yelp? This isn’t like a restaurant. I’m going to look at Yelp, I’m going to see if they have good Italian food. This is a lawyer. There are a dozen different … Martindale-Hubble, there are all types of ratings that lawyers get.

So this rating, apparently this lawyer is in such bad shape that she has to say hey, my Yelp really matters, and my client gave me a bad Yelp, gave me a one. What do you think about this story?

Farron Cousins: I think it would have to be the kind of lawyer that probably does a commercial standing on top of a semi truck. That seems like the kind of person that may or may not depend on Yelp a little bit too much. But this is an interesting case because I agree with it, and I disagree with it. Because I don’t think Yelp should have to take down this review. I don’t think the court has any right to order them to do that, unless, of course, and this is where I disagree. If there was actual defamation that took place within the review. If it was just saying this was a horrible lawyer, they did not do what I wanted them to do, do not hire this person, there’s nothing wrong with saying that. That is your personal opinion. That’s what this website is for. Yelp tried to argue though …

Mike Papantonio: That they had immunity.

Farron Cousins: Yeah, we didn’t write the review. We’re not associated with it. We’re just a place for people to say these things.

Mike Papantonio: We coordinate, and we aggregate, and we put all this stuff on there, how can we be responsible for it?

Mike Papantonio: Okay, so let’s go to the legal analysis. Aside from the analysis, that we’re dealing with an attorney that feels like their life has been changed because they get a one-star on Yelp, 1-800 non Yelp lawyer. You can see it. So at any rate, as I look at this story, Yelp is right. Yelp is right. They’re an aggregate. They’re in the business of taking people’s complaints. Yeah, this is a great Chinese restaurant. I love it. There are people that go on Yelp because their cuckoo. There are people that write into, Ring of Fire, absolutely cuckoo. When you read their stuff … I do a show, as you know, that’s called America’s Lawyer, and it’s on Russian television. So I have all the freaks come out, like I’m some sort of Russian spy because I do Russian television.

You talk about freaks. Look, social media … Here’s the truth. Social media is part of the process. Anybody who takes the time on social media and spends a lot of time giving comments about stuff, you know, it’s going to happen. It’s not Yelp’s fault. It’s just part of social media. So she gets a one-star, come on. They should have a type of immunity that says, yeah, I’m just an aggregator. If it’s an act of violence, if it’s moving towards hate speech or violence, that’s a little different.

Mike Papantonio: But I didn’t get the impression reading this case that that had anything to do with that.

Farron Cousins: No, absolutely not. This was a lawyer, somebody who was upset that they got a one-star rating, a very thin-skinned individual that … And like you said, obviously their practice is dependent upon Yelp reviews. But here’s the point of things like this and the other ratings is to go through and read why that person gave a one-star review. Because you can tell real quick if this is somebody who’s got a personal vendetta or if it’s somebody who’s got a real grievance with it.

It’s the same thing if you read a review of a product on Amazon. You can tell if it’s somebody who actually did get scammed by this product or they just hate the company.

Mike Papantonio: There are people that sit home all day. They’re watching “Days of Our Lives.” They’re watching Oprah in the afternoon. I don’t know what they’re doing. They don’t have a lot of stuff going on. So they go on social media. Sometimes they’ll go to something like Yelp. They had a hamburger at Joe’s Burger Café. That’s what this is for. And you either have enough sense to look at it, and say yeah, this is a one-star, but this particular person, yeah, I can read between the lines, they’re not all wired quite right. It’s just how things happen. You can do this with any social media.

I kind of agree with Yelp on this.

Farron Cousins: It’s an affront to free speech. Because what’s going to happen if this lawyer wins, now you have Joe’s Burger Shack that says hey, this person is mad that they got pickles, so they gave us a one-star review. Well we have good pickles, so you have to pull that too. It’s a slipper slope.

Mike Papantonio: Yeah. Scientific data is growing exponentially in support of the notion that legalized cannabis access can actually mitigate opioid use and abuse. This story centers around a couple of cases, I think, that we’re having that are coming up because you’re having so many states that are legalizing marijuana. Once we could study marijuana, here’s what happened. The drug enforcement, DEA, made it impossible for a university to take marijuana and study it, to do any kind of broad, epidemiological study. It was virtually impossible. DEA knew they were doing that.

Pharmaceutical industry, by the way, I want to point out, were part of that. They were the ones that were fanning that flame, let’s keep cannabis out as long as we can. Let’s not even let people do studies. And they actually got involved in the legislative process to push back on states that were trying to get cannabis legalized.

So all of a sudden, now we’re getting some studies, right? We’re seeing some things that are very significant. And one of them is that even brick and mortar, a brick and mortar shop, where you’ve got a town with brick and mortar shops that sell legalized marijuana, that the opioid drug use in that area is diminished. These numbers are speaking for themselves. These reports are pretty good.

Farron Cousins: They are. What’s phenomenal about this is we’re not just talking about it decreases a little bit. We’re talking about 64% decreases in areas of Michigan, 77% reductions in other places, on opioids alone. Then you factor in how much it’s getting people off of their prescription migraine medication, sleep aids, antidepressants, PTSD treatments. This study, which is in the journal of the American Medical Association, so you know it’s legit.

Farron Cousins: And several different universities contributed to this, and they all found the same thing. You want to solve the opioid here in the United States, and you’re not willing to throw pharmaceutical CEOs in jail, this is how you do it. And this might be the only way you’re able to do it, because in every area we’ve looked at, these researchers say, you got medical marijuana, you have fewer opioids users and abusers and death.