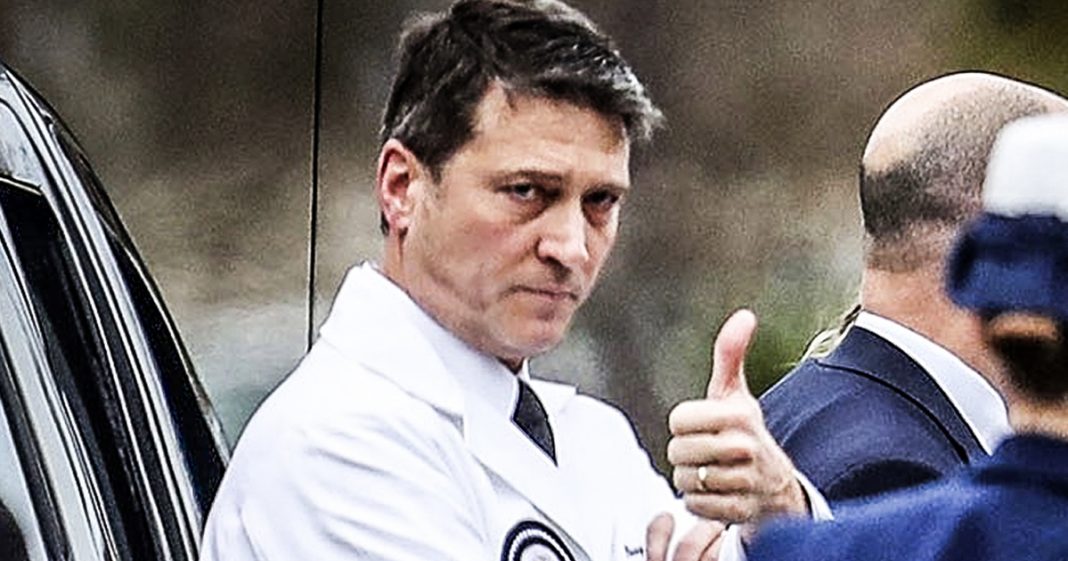 Dr. Ronny Jackson, the physician to President Trump and several other former presidents while they were in office, has been accused of drinking on the job and over-prescribing medication to patients. This information was revealed during the Senate’s background checking on Dr. Jackson, whom Trump has nominated to head up the VA. Ring of Fire’s Farron Cousins discusses this.

Well, as it turns out, during the course of the investigation into Ronnie Jackson before he could have his hearing to become the head of the VA, a little bit of information’s been uncovered about this man who thinks Donald Trump only weights 239 pounds. As it turns out, this guy is apparently a heavy drinker and has been known to drink on the job while treating patients. Workers who worked under Dr. Jackson also describe a hostile work environment, mostly because of his alcoholism, and said that he would often over-prescribe medication for his patients — give them medication that they don’t need, give them way more than they ever could possibly need, and basically committed a bit of malpractice in that regard.

So, here’s why this is important. First and foremost, obviously, Donald Trump wants this guy to head up the VA. That very same VA that has had problems for decades now with being dysfunctional, not treating people in a timely manner, not taking care of veterans here in the United States. And Donald Trump wanted to put in a guy known to be drunk on the job, just because he gave him a glowing medical review that no real credible person in this country actually took seriously.

Maybe that explains it. Maybe that’s why this guy thought Donald Trump was in perfect health. I mean, if you were drunk off your ass, maybe, and saw Donald Trump, yeah, you might think he’s a good-looking guy. Maybe he had his beer goggles on when he evaluated him.

Nonetheless — and for the record, no, I don’t think that Ronnie Jackson was drunk when he examined Donald Trump there — but didn’t Trump tell us he was only going to nominate the best people for positions. “We’re gonna drain the swamp. We’re gonna get rid of all the crappy people in the federal government.” And yet, every single opportunity this man has had to nominate somebody for a position in the federal government has turned out to be possibly the worst person you could imagine to run that position.

The VA has very serious problems that need to be addressed by very serious people. And if this investigation by the Senate is accurate, then Dr. Ronnie Jackson has absolutely no business whatsoever not only being the head of the VA, but continuing on as a medical practitioner. He should be stripped of his license if these accusations are proven true, pending further investigation. Because nobody should have to go into the doctor’s office and question whether or not that doctor is even sober on that given day.