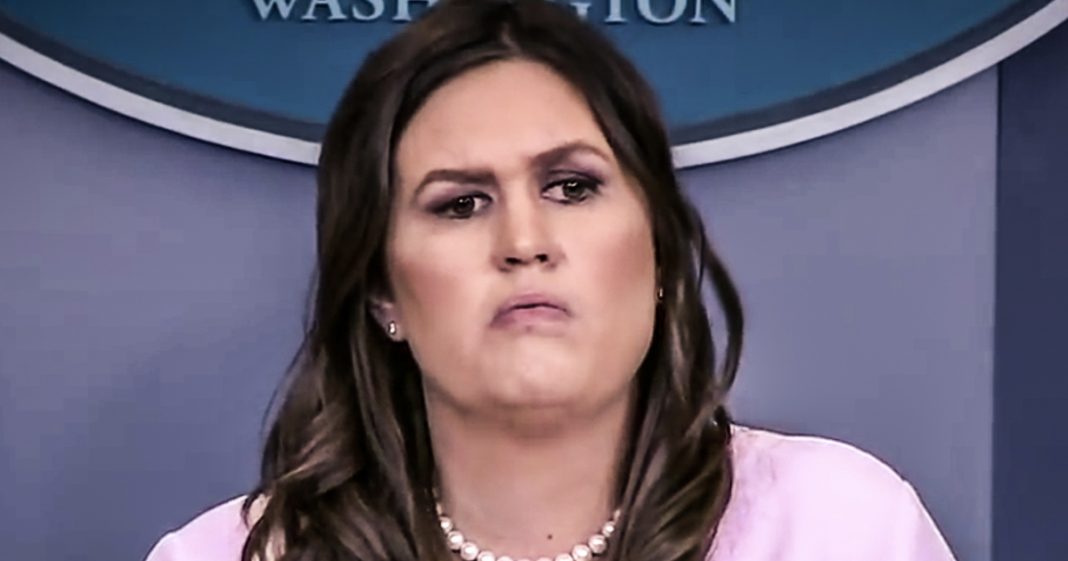 White House Press Secretary Sarah Huckabee Sanders had a tough time attempting to explain Donald Trump’s tweet talking about a “breeding concept” among illegal immigrants in sanctuary cities in California, and after being pressed on the issue numerous times during a press briefing, she finally gave up and admitted that she has no idea what the President was trying to say. Ring of Fire’s Farron Cousins discusses this.

White House press secretary Sarah Huckabee Sanders had a very rough Monday press conference. During that press conference, she was pressed repeatedly about a tweet that the president had sent out Wednesday of the week before, where he referred to a “Breeding concept among illegal immigrants,” allegedly in “Sanctuary cities in the state of California.”

Speaker 2:
Ask you about a tweet that the president put out last week. He tweeted a lot over the weekend, but last week he was talking about sanctuary cities in California and saying “There’s a revolution going on in California. So many sanctuary areas want out of this ridiculous crime invested and breeding concept.”

We haven’t had a chance to ask you about that tweet. When he used the word breeding, was he making a derogatory term about Latino’s in California that they breed a lot, or that they’re prone to breeding?

Sarah H-Sanders:
No, he’s talking about the problem itself, growing and getting bigger.

Speaker 4:
I want to follow up on [inaudible 00:01:18]. When you said breeding, the president was very clear in his statement about this issue, he said in a tweet “There’s a revolution going on in California. So many sanctuary areas want out of this ridiculous crime invested and breeding concept.” What did he mean by breeding?

Sarah H-Sanders:
Again, the president has recognized that this is a major problem, and a lot of people, even in California, want to see the issue of sanctuary cities addressed. And the president’s doing what he can to do that.

Sarah H-Sanders:
I’m not going to begin to think what you think. Certainly, I think that it can mean a lot of things to a lot of people. But the president’s talking about a growing problem and I addressed that with Jim, I don’t have anything else to add.

Speaker 5:
Just one quick question. I want you just to define what the president meant about breeding. To be specific, he’s not talking about people having babies, yes?

Sarah H-Sanders:
Not that I’m aware of, I’d have to ask him to dig into that deeper.

Sarah H-Sanders:
I just said not that I’m aware of, and I would have to ask him to be more specific.

One of the greatest parts about those clips is the fact that she just gets increasingly more frustrated as the questions continue, until she’s eventually like you know what, I don’t know, I don’t know. I don’t know what the hell this guy meant, I don’t even like my job, I don’t want to be here. Can I just go now?

I mean yeah, she didn’t say that, but you can hear it in that voice. She is so pissed off about what the president says on Twitter, because she is the one that has to go out there and try to interpret it for the press in a way that’s going to both appease members of the press, and the president himself. Because if she says the wrong thing, if she misinterprets what he’s trying to say, she’s going to lose her job.

This is dog whistle politics folks, normally Donald Trump is a little bit more overt with it, but this time he decided to play it cool, and it worked. But Sarah Huckabee Sanders, if you want to watch the full press conference. There’s also one point where somebody asks as a follow up “I want to ask you about another one of Donald Trump’s tweets.” And she just rolls her eyes and looks away for a moment. It’s hilarious, this woman hates her job.

She hates having to go out there every single day and defend these insane tweet by the president of the United States. But she believes in them, she believes in the things she’s out there saying. She believes the things her crazy father says on Fox News. So I have no sympathy for her whatsoever. If she actually hated this job, she could easily walk away and go find a new position, possibly on the Fox and Friends couch, as a regular contributor.

But instead, she’s making the choice to go out there every day and be confronted by an angry public that wants to know what the hell the president is talking about.