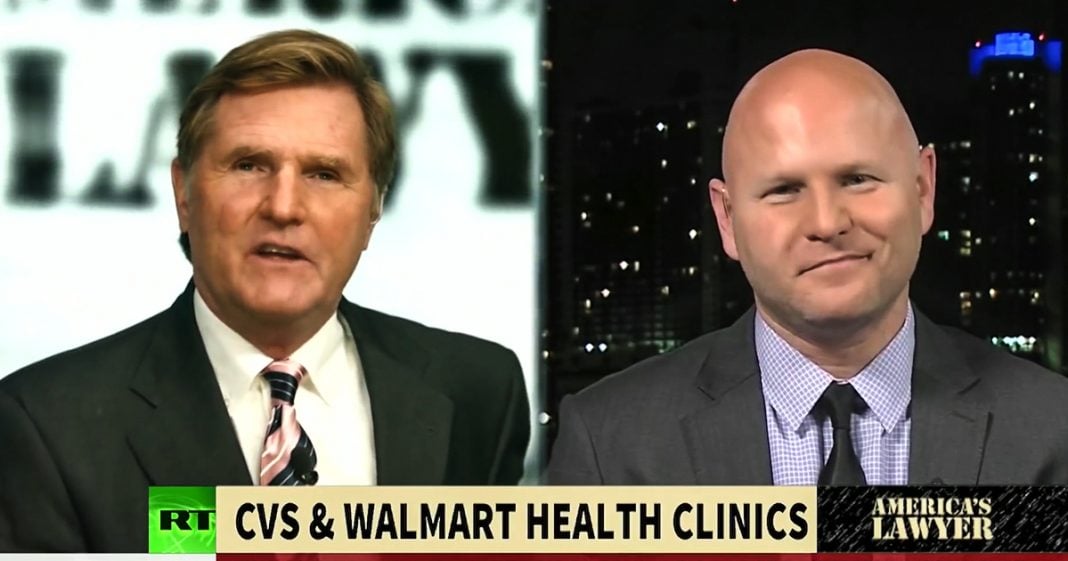 Via America’s Lawyer: Mike Papantonio and Farron Cousins talk about how CVS and Walmart are teaming up with insurance companies to change the way Americans receive healthcare.

Mike Papantonio: CVS and Walmart are teaming up with insurance corporations Etna and Humana to form what could become the largest chain of retail clinics in the country. The proposed mergers come as visits to urgent care clinics have become more popular than seeing a primary doctor. While these new retail clinics are convenient to access, practitioners are questioning whether the corporate influence in medical care is really in the best interest of the public. Joining me to talk about this topic is Farron Cousins, he’s the editor of the Trial Lawyer Magazine, one of the biggest trial lawyer magazines in the country. Farron, why is this new wave of urgent care clinics promoting retail corporations to merge with insurance companies? Why is all that happening?

Farron Cousins: We have CVS right now that’s trying to buy out insurance giant, Etna. You’ve got Walmart that’s trying to buy out Humana and the reason they’re doing this is because they want to become these one stop shops where you go, you get your insurance there, you meet with a nurse practitioner and then you take the prescription that that person gives you back to the counter. The insurance that you just bought is going to cover that and so that’s what this all is. This is about a corporate takeover of the US healthcare system which was almost pretty much already taken over by corporations, and now they’re just trying to consolidate it. You can go to Walmart, you can get your oil changed, you can buy your health insurance, go to the eye doctor, go to a nurse practitioner, get your prescriptions filled. This is not the kind of efficiency that we need in this country. We do not need corporations like CVS and Walmart merging with health insurance giants, telling us which prescriptions we need and which ones they want to pay for and which ones they want to cover. There’s no good ending to this story here.

Farron Cousins: Well, there’s a lot of reasons that play into that. First and foremost, we’re impatient as a society. When we get a cold, when we have something wrong, we want it fixed that very minute and these little minute clinics that you see popping up in about 1100 CVS stores across the country, that’s what they offer. You can walk in there say, “Hey I’ve got a cold.” They give the prescription for antibiotics, you’re in and out in about 10 minutes. Whereas you call your doctor, you set up an appointment for later in the week, you may end up missing more days of work because of that, something that very few people in this country can do. So it’s built into the system of capitalism to want to get better, get over an illness faster, but also just general impatience makes people want to go in, meet with somebody who maybe didn’t go through medical school, a nurse practitioner, and I mean no offense at all to those folks, but you’re not getting the same level of care, you’re not getting the same comprehensive check up that a family practitioner would give you. You’re going in basically saying, “I have a cold, I want antibiotics and I want to get back to work in the next five minutes.” And they cater to that.

Mike Papantonio: One thing for certain, corporations own medical care. It used to be doctors owned hospitals, that was before you were born, when I was a younger person. Doctors owned hospitals, it wasn’t a corporation that came in and bought every hospital round and then tried to say that, “Gee whiz, doctors still run what we do.” No, they don’t. You have for profit hospitals that are trying to call themselves non-profit hospitals. There’s this new gig where a hospital can call itself a non-profit hospital and in the end, they’re paying exactly the salaries they want, the bonuses they want. At the end of the year if they have a big bunch of money left, all they do is they go buy another hospital, they buy more property. So it is another corporate scam. So doctors aren’t involved in the process anyway in hospitals anymore. They have very little influence. As I look at this, you’ve got Apple, Amazon, I think JP Morgan, Berkshire Hathaway, they have plans to provide their own private healthcare for their employees. What’s this saying about the state of healthcare in America where you’ve got corporations saying, “Why do I want to send our employees to a corporate hospital, we’ll build our own entity right here?” What’s your take?

Farron Cousins: Right, and that just furthers the corporate takeover of the healthcare system in the United States. You take a group like Apple, that’s already trying to create their own little healthcare system, their own version of health insurance that I guess is going to work inside the Apple Hospital, the iHospital, whatever they’re going to call it, I don’t know. But this is just so that they can control. That’s what all of this is about, control. How much control can one corporation have over both your healthcare, your doctor and the prescriptions that they write to you? Take a company, use Apple again, suppose they do create their own healthcare system with their own version of health insurance. That health insurance is going to tell their employees what prescriptions they can or cannot have access to. The doctors that are owned by whatever corporation are going to adhere to that, they’re going to go with what the insurance company does or does not want to cover at the pharmacy that they also own. People are not going to get adequate care-

Farron Cousins: … they’re not going to get the comprehensive check ups that they need.

Mike Papantonio: Yeah, you know Farron, if you talk to doctors who’ve been in this business a long time, they’ll tell you the younger doctors who are graduating from medical school, they expect to go from medical school to work for a corporation. It used to be the doctor would come out and they’d say, “Well I want to team up with three or four other doctors in my specialty, we’re going to start a specialty group.” But what’s happening now is you have young doctors, they just think it’s just part of the system. “I’m going to graduate, I’m going to work for a corporation, I’m going to work for a corporate hospital, that’s how things are.” It’s really a difference in how doctors are thinking about this. As far as you can tell, quickly, how accurately have retail clinics, or urgent care clinics, been with diagnosing patients and providing the right treatment? What’s your quick take on that?

Farron Cousins: We’ve seen a lot of instances where, specifically children, are being prescribed medications that are either way too strong for them, medications that should not be used on children, so we are starting to see a lot more instances of this over-prescribing, or wrong prescriptions going out, and again, it’s because they’re not going to the pediatricians, they’re going to this nurse practitioner so we can get in and out and try to get on with our lives, which doesn’t work when you’re talking about human health. Sometimes you’ve got to take a little bit more time so that the doctor can get it right.

Mike Papantonio: My prediction is you’re going to start seeing an awful lot of lawsuits that come out of this for substandard care. That would be my take, just looking ahead. Thank you for joining me, Farron.