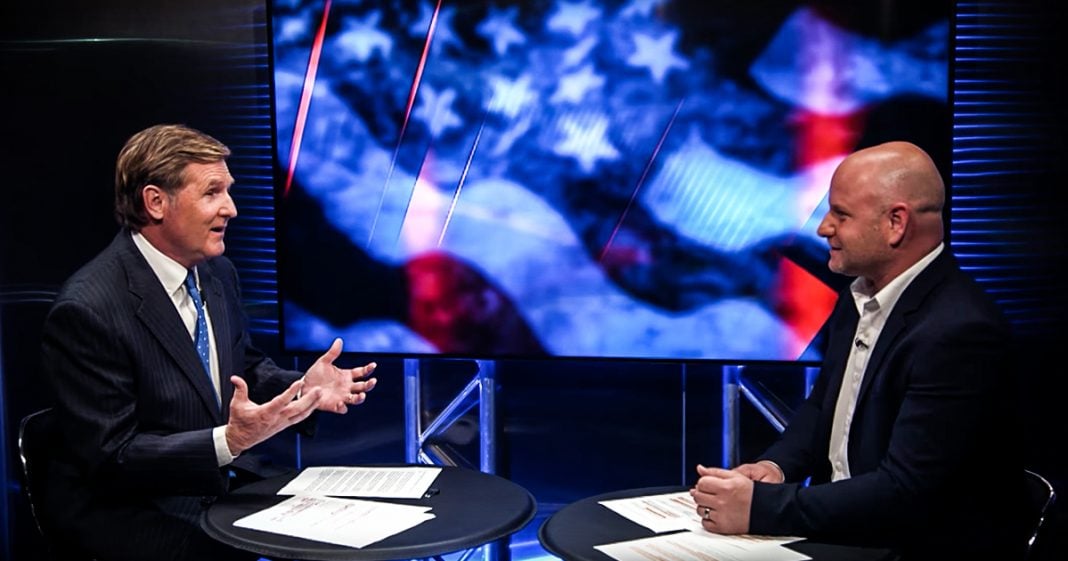 The Consumer Financial Protection Bureau’s acting director is asking Congress to rein in the agencies that he’s supposed to be leading. He’s in charge. He’s saying, “Congress, please rein us in.” Mick Mulvaney, the Leader of CFPB, thinks his organization has too much power, and while he’s there he wants Congress to take away as much power as possible. Ring of Fire’s Mike Papantonio and Farron Cousins discuss this.

Mike Papantonio: The Consumer Financial Protection Bureau’s acting director is asking Congress … listen to these words, he’s the Consumer Financial Protection Bureau’s acting director, Mulvaney. Of course, you’ve heard his name, he’s the nutcase. He’s asking Congress to rein in the agencies that he’s supposed to be leading. He’s in charge. He’s saying, “Congress, please rein us in.” Mick Mulvaney, the Leader of CFPB, thinks his organization has too much power, and while he’s there he wants Congress to take away as much power as possible. Well, first of all, look, we both know the history. Give us the background of Mulvaney. I mean, tell us a little bit about him.

Farron Cousins: Most of Mulvaney’s professional career has been financed by the payday loan industry, those predatory payday lenders. They’ve given a ton of political money to Mulvaney. And so the first thing he did, obviously, when he came into office, before he wrote this report asking for less power, was he dropped a bunch of lawsuits against the payday lending industry for all of their predatory practices, ripping off consumers, creating endless cycles of debt. So Mulvaney last week issues his first report to Congress, and in this first report, which was supposed to be about what his agency is doing, about the only thing he says is, “I have so much power here to actually hold banks accountable that you’ve got to take it away from me. I don’t need this. I don’t want it. Let’s cripple this agency, and you can help me do it, Congress.”

Mike Papantonio: Well, you know there’s only a couple … You can either read it like, “I, Mulvaney, am so stupid, and I’m afraid that you’ve given me all this power, because I’m a fool, and I’m going to use the power in the wrong kind of way.” Or you conclude the obvious, and that is he’s joined at the hip with the very industry that he’s supposed to be … he’s supposed to be in charge of making sure that this organization does their job and protects consumers. There’s been some good results that this organization has gotten, and now all of a sudden he says, “Well, you know, consumers really aren’t that important. Yes, I was involved in an industry that ripped them off.” The payday lending process was such a scam. As a matter of fact, people went to jail because of it. I’m surprised, frankly, he didn’t go to jail because of it.

Farron Cousins: It’s so funny too, because he wants Congress to come in, because this is the group that’s supposed to be regulating those big banks, the Wall Street bankers, holding them accountable. And so by bringing Congress in, by saying, “You have to share this power with me, because it’s too much for me,” it’s going to let Congress once again regulate the banks, come up with the rules, come up with the penalties and punishments when they break the law. Not if, it’s a when. We know it’s when they break the law, and Congress will do nothing. We’ll end up in the same tailspin we were in 2007-2008, and the cycle will continue to repeat itself, because-

Mike Papantonio: What he’s really doing, he’s creating a record. That’s what he really wants to do. He wants to be on the record as saying, “I’m the insider. I’m the guy that’s supposed to know most about it. And yeah, I’m either too stupid … you’ve given me too much power and I’m way too stupid for that power … or you know what, consumers really don’t matter.” They did a couple great things last year, if you remember, before Mulvaney took control. This agency has potential to really get some things done, don’t they?

Farron Cousins: It absolutely does, and those lawsuits against payday lenders were going to be huge. You could have shut down the industry, or at least fixed it, and Mulvaney steps in, says, “Nope, not good enough for me. Take away my power, because I’m too stupid to know what to do.”

Mike Papantonio: Yeah, “I really am a dummy.” A Michigan agency has approved Nestlé’s plan to boost the amount of water it takes from the state, even though more than 80,000 residents had asked for the state to refuse Nestlé’s request. And so, again, it comes down to an agency that’s packed with political hacks. We know the ending to this before it even starts. I want you to think about something. When we saw all of the Koch brother activity … remember the Kochs? They were getting involved in school board races and county commissioner races, and everybody’s scratching their head, saying, “My God, you’re spending billions of dollars on these dogcatcher kind of races. What’s up?”

Well, this is what’s up, you see. This is what’s up. Now the agency in Michigan is going to say to Nestlé, “Oh sure, we’re water-starved, our water is poisoned, you’ve taken …” Nestlé, as you know, has stolen water from California. They’ve stolen water all over the world. I claim it’s stealing, but really from the standpoint of the way it all takes place, it takes place with political favors, it takes place spreading money around. In California, for example, what was it? For years, was it 20 years?

Mike Papantonio: 40 years. They were pumping water and paying not a dime. Okay, so let’s talk about this story here.

Farron Cousins: What’s happened here is that Nestlé was already taking water away from Michigan, which is one of the most water-starved states in the country. They were doing 250 gallons a minute at current rate. They wanted more. 250 gallons per minute was not enough. They wanted 400 gallons per minute. So the agency in Michigan does what they’re supposed to do, they open it up for public comment. 80,945 people came out publicly and addressed the agency and said do not let Nestlé do this for reasons X, Y, Z. 75 people in the State of Michigan …

Mike Papantonio: Said it was okay.

Mike Papantonio: Pure Life. They make a product called Pure Life, 10,000 shards, little pieces of plastic that are microscopic, they have to use dye to find it, but it was the highest of all of them.

Farron Cousins: It was, and so you have to wonder, obviously, when they pump this water out of the earth, out of the springs, it doesn’t have plastic in it, so what point along the way are they putting this plastic in there? How is it getting in there? But more importantly with this Michigan story, Flint, Michigan is still a disaster. They do not have clean water, and Nestlé comes along and the state, controlled by Republicans, says, “You know what? Take more of our water. What do we need it for? The poor people in Flint? No, no, no. They like their leaded water. You take what you need, Nestlé.”

Mike Papantonio: Let me point out, they’re doing it all over the world. You need to watch this story. This is a very ugly story. It’s going to get really, really ugly once they own all the water aquifers.