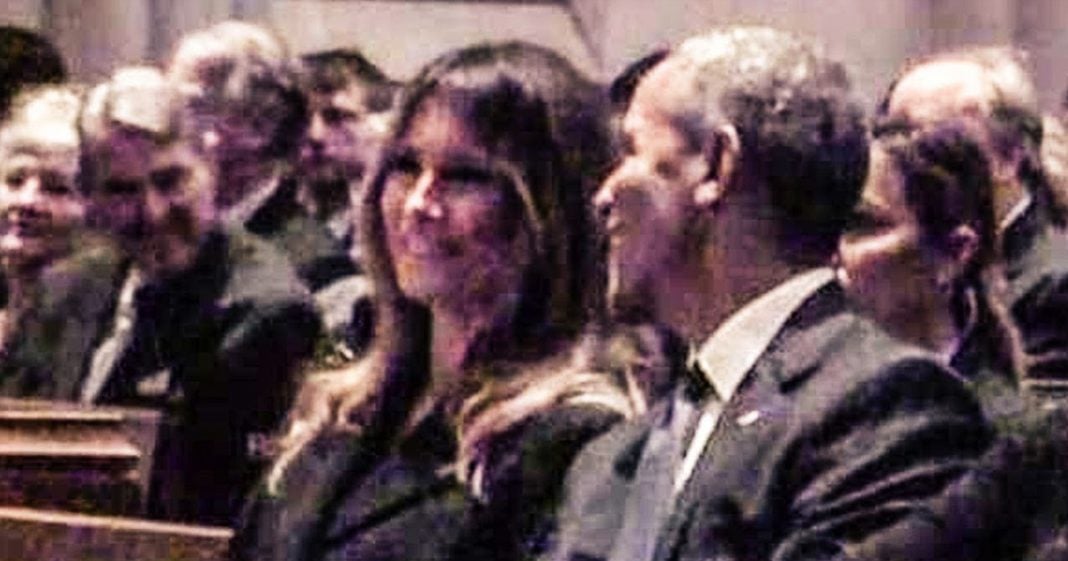 Donald Trump said that he was going to skip former First Lady Barbara Bush’s funeral this past weekend “out of respect for the family.” But how respectful was he being by spending that time playing golf and rage-tweeting while others, including his wife, were paying their respects. There are certain duties that come with being President of the United States, and attending high profile public figures’ funerals happens to be one of them, as Ring of Fire’s Farron Cousins explains.

This past weekend was the funeral of former First Lady Barbara Bush, the wife of former President George H. W. Bush, and former Presidents attended. Even Melania Trump showed up, but not Donald. You see Donald Trump had announced earlier in the week that he wasn’t going to go to the funeral because, you know, he wanted to respect the family, so instead Melania went. She actually brought several former White House staffers that worked under the first Bush administration so that they could pay their last respects to Barbara Bush.

So, instead of going, as Barack Obama, and Michelle Obama, and Bill and Hillary Clinton, and George W., obviously it’s his mother, and Laura Bush did, Melania was there, Trump decided to go golfing instead. And in addition to playing golf, for I believe it was the 109th time since he was sworn in as President, he also spent most of the morning rage tweeting while former Presidents were paying their respects to Barbara Bush, and the Bush family.

That’s the difference between Trump and pretty much everybody else whose ever been the President of the United States. Donald Trump doesn’t want to do any of the, you know, more solemn things that you have to do as President of the United States. Attending the funerals of high-profile American citizens, especially former First Ladies, or former Presidents, that kind of falls within the realm of things that you have to do whether you want to do it or not, but Donald Trump, just like a child, wanted to go out and play golf, and have fun, and get on Twitter and troll people, and be a piece of shit, instead of going to the funeral of Barbara Bush.

I don’t care what you think about Barbara Bush, personally not a big fan of her, but if you are the President of the United States that’s kind of an event you need to go to, but to be honest, for the sake of this country, it’s probably better that Donald Trump didn’t go. I mean after all, Melania Trump looked like she was having the time of her life. That was one of the first and only times we have seen several different photographs of Melania Trump actually smiling since her husband became President. That photo of her sitting next to Barack Obama with the biggest smile on her face; I have no doubt that pissed Donald Trump off more than anything since he became President because Melania was truly happy. She was happy being away from him. She was happy being around people that seemed to have a very healthy and decent respect towards women, and treat them as equals, not as sex objects, as Donald Trump does.

But again, you’re the President. You don’t want to do all the parts of the job that go along with it then resign. Most people in this country would actually support that. They would be happy if you decided to do that, and especially considering the fact that you don’t want to do all the work that goes along with it because it might be a little depressing from time to time, I certainly think that you chose the wrong line of work. You have plenty of opportunity to resign, and just play golf for the rest of your life, and sit on your mountains of money. Leave governing and paying respects, and being respectful to other people, to somebody much more dignified than you.