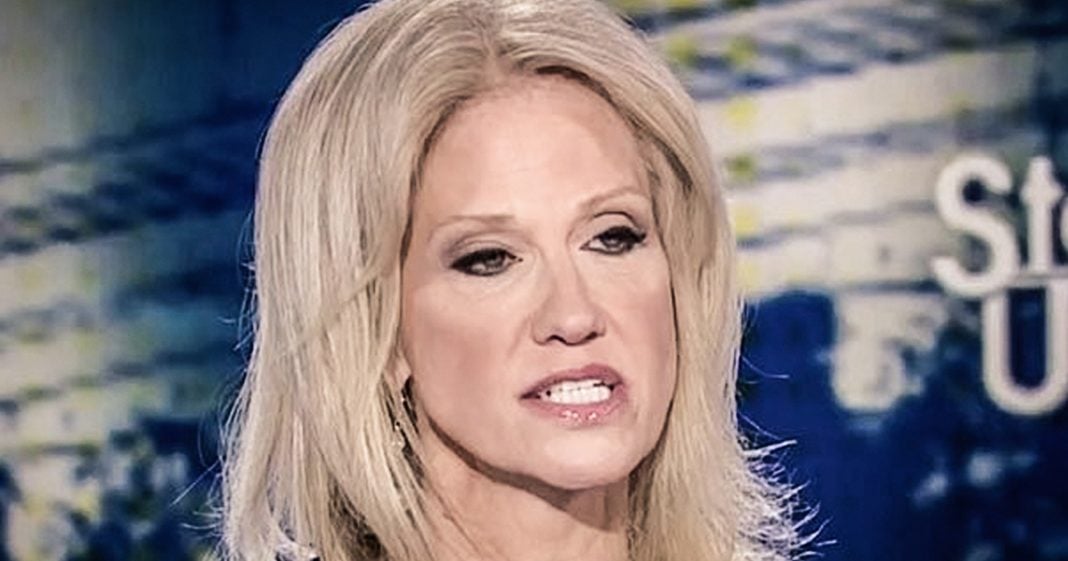 During a recent appearance on CNN, White House counselor Kellyanne Conway was asked, repeatedly, why Donald Trump was afraid of his attorney Michael Cohen “flipping” and providing information on him if he’s done nothing wrong. And, time after time, Conway refused to directly answer the question and instead tried to misdirect and distract the host with nonsense answers. As Ring of Fire’s Farron Cousins points out, it didn’t go so well for Kellyanne.

A lot has been said recently about the fact that Donald Trump is allegedly afraid that Michael Cohen, his former attorney, is going to flip on him and provide information to investigators that could incriminate Donald Trump in some kind of crime. Now, the thing most people have been saying since the beginning of all of this is that you can’t flip on an innocent man. So if Donald Trump is worried about Cohen flipping, then obviously there’s some skeletons in the closet that he doesn’t want to come out. When CNN’s Dana Bash asked White House counselor Kellyanne Conway about this, Kellyanne Conway did what she does best, and completely ignored the question, and instead went on some kind of insane tirade, trying to defend Michael Cohen to keep him in the White House’s good graces. Take a look at the recent clip between Kellyanne Conway and CNN’s Dana Bash.

Dana Bash: Let me get back to the original question, though, which is, at its core, what does the president have to hide that he is worried that Michael Cohen will flip over? Meaning-

Kellyanne C.: No, that wasn’t your question.

Dana Bash: … what information does he have to give?

Kellyanne C.: That wasn’t the original question, Dana, respectfully, and that isn’t what he’s saying in these tweets, in his tweets. He’s saying this is a fine family man who he worked with for many years. He thinks he’s being treated unfairly.

Kellyanne C.: Dana, the president is … You’re asking me what do I know is in documents over a dozen or so years. I’m telling you that the president’s concern has been for Michael Cohen and the way he’s been treated. He has said that again and again in tweets, and again and again with the cameras rolling, with the media, in the cabinet room and elsewhere.

Why is that? Because I see people go on TV constantly who don’t know President Trump at all and say, “He’s loyal to no one but himself.” That is completely not true. He stands up for people in his inner circle and people he knows when he thinks they’re being treated unfairly, and he’s done it again and again. He shows a great sense of loyalty to people whom he thinks are being treated unfairly, but remember too, this investigation of almost a year was supposed to be about Russian collusion. Look at all the screaming graphics CNN has invested in. Look at all the airtime and the ink spilled on this.

Dana Bash: But this is separate.

Kellyanne C.: By the way also, to answer your question very pointedly-

Kellyanne C.: … this president was told three times by Jim Comey privately that he wasn’t under investigation by the FBI. Comey decided against revealing that publicly, and probably should have, in fairness, just the way he should have told President-elect Trump on January 6th in Trump Tower that his political opponents had funded some phony dossier against him. The Washington Post, of all places, reported less than two weeks ago that this president has been told he’s not a target in the investigation. I think we’re answering your question in many different ways. You just want to now take it into a different jurisdiction.

Dana Bash: Absolutely. I didn’t take it in a different jurisdiction.

Kellyanne C.: That’s what the process is for.

Dana Bash: The president’s own Justice Department took it in a different direction-

Kellyanne C.: But all this diverts attention away from everything this president is doing.

Kelly, you don’t do your boss any favors when you blatantly ignore the question that you’ve been asked, and then at the very end, when you’re like, “And to answer your question directly, here is an answer that’s not even close to the question that you had asked me.” Yeah, that doesn’t do any good. All you’re doing, every time you get in front of a camera, is making your boss look more guilty. You did not help him out in any way possible, but it is funny to watch you try to pander to Michael Cohen at this point, and Donald Trump’s tweets pandering to Michael Cohen, because obviously you guys … It’s not about loyalty. It’s about trying to say that, “A, we really, really, really, really like you. Please, for the love of God, don’t turn over all that horrible information that we know you have.”