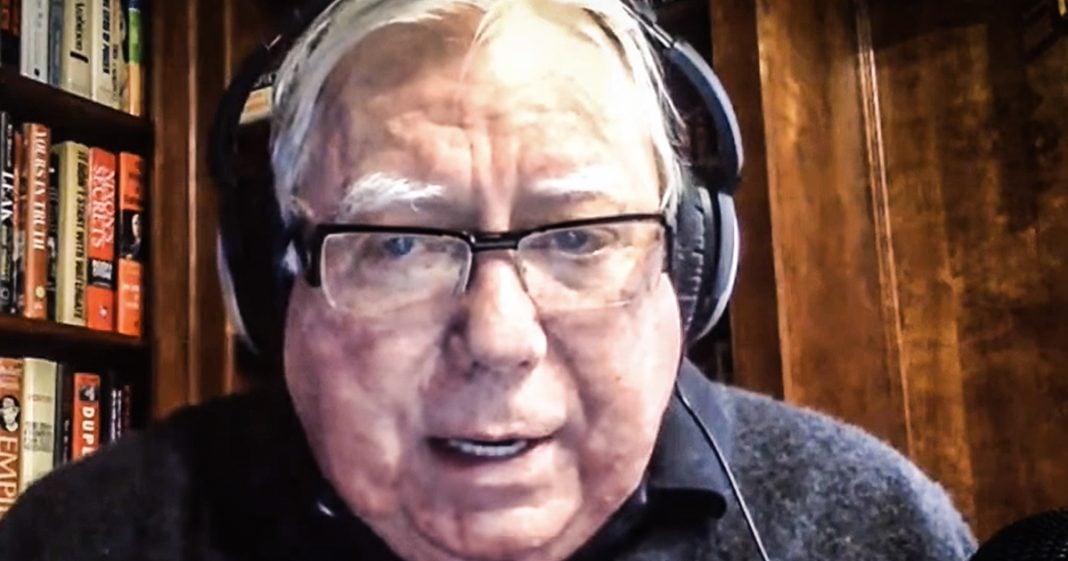 Jerome Corsi, a contributor to Alex Jones’ Infowars, recently went on an unhinged tirade about James Comey and former members of the Obama administration, going as far as to say that he wants to “duke it out” with Comey, and that these people should be put to death for treason. Ring of Fire’s Farron Cousins discusses this.

Jerome Corsi, the Washington bureau chief for Alex Jones’ conspiracy theory site, Infowars, recently, during a very long livestream, started talking about James Comey and several members of the former Obama administration, but it was Comey in particular, what he said about Comey that really stood out as quite possibly sociopathic. Listen to what Corsi had to say.

Jerome Corsi: McCabe and Comey, they were both in the criminal conspiracy. They’re both guilty of treason. They’re both going to be prosecuted for it. Comey was doing … McCabe was doing what Comey wanted and Comey was doing what Loretta Lynch wanted and Loretta Lynch was doing what Barack Obama wanted done and Hillary Clinton. They’re all criminals. They were all trying to prevent Donald Trump from being … They’re all traitors. The two of them fight, pointing fingers at each other, it’ll just make it easier to get the criminal confessions on the table, but they’re both guilty and neither one of them is any way good or has anything good about them. They’re both traitors to the United States of America. Comey running around with this disgraceful book tour, he’s another one I want to duke it out with. Comey acting like this big puppy dog when he’s really Cardinal Comey, sanctimonious, higher standard. Higher standard is to treason. That ought to get him to the end of a rope and let him swing in the air.

That’s right, Jerome Corsi, who sits at a computer all day wants to fistfight, duke it out, with James Comey, the former director of the FBI. I know Comey has probably lost a few steps in his age, but again, this guy was trained by the FBI. I have to imagine that he’s probably not completely useless at a fistfight. Personally, I would love to see Jerome Corsi fistfight James Comey. I think that would be phenomenal. They could do it for charity. They could raise money. They could give the money to the homeless, give it to a homeless shelter, something.

That would be phenomenal, but here’s the problem with this story just in general. First of all, Corsi saying that Comey needs to be hanged. What treasonous activity has he or any of the other people he was ranting about during that little tirade, what have they committed? Did any of these people collude with a foreign power to help steal the United States election, because according to all of the available evidence, no, none of them did. You may not like them. You may not be fans of them, but I’m pretty sure calling for their murder is something that could end up getting you prosecuted, Dr. Corsi.

Infowars people, the people who watch this, the people who tune it in and say, “Jerome Corsi knows what he’s talking about”, that’s the real danger here. Corsi is just some crazy guy with a microphone and a computer. It’s the people that tune in, the people that listen to this that are the real threat to the way of life here in America. They believe him. They want to see these things happen. As we’ve seen in recent years, they’re attempting to make it happen. Infowars, Alex Jones, with their pushing of the “Pizzagate” scandal almost got people killed. I shouldn’t even say scandal. That was a conspiracy, 100%, but they almost got people killed. Other followers of Infowars have done similar things. This has to stop. These nut jobs on the air are pretty soon going to have a body count next to their names because of the crazy people that they are inspiring to go out in this country and do unspeakable acts of evil just because Alex Jones, Jerome Corsi and everyone else at Infowars thinks that sparking the craziness in this country is going to help their ratings.