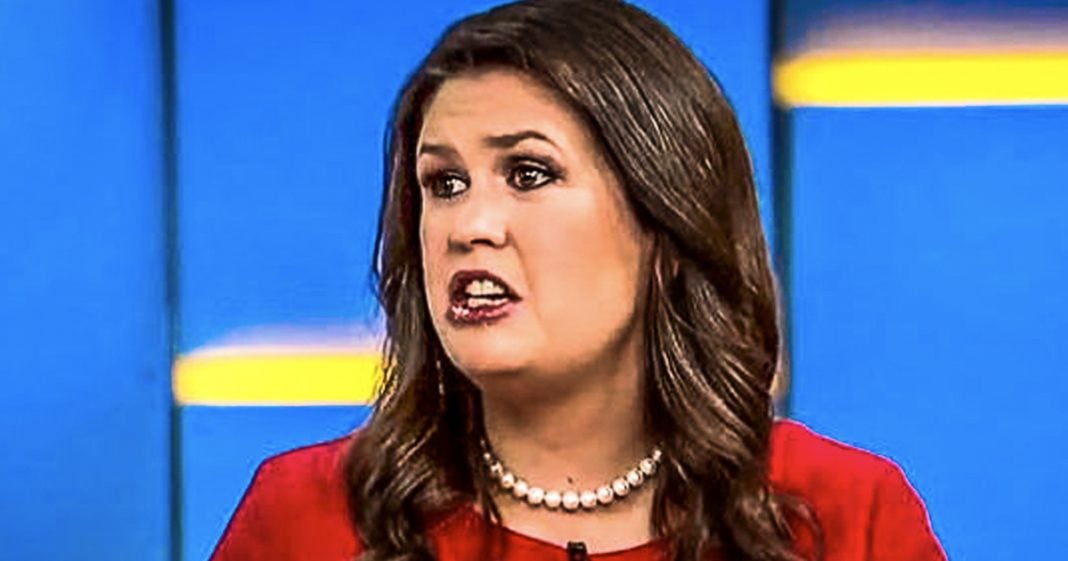 Mike Pompeo, the former Director of the CIA, Donald Trump’s pick to replace Rex Tillerson as Secretary of State, has still not been confirmed by the Senate, and that’s a good thing. We’ll get into more about why Mike Pompeo is a horrible pick for Secretary of State in a moment, but this morning, Sarah Huckabee Sanders went on Fox and Friends and explained just why the Democrats are so horrible for this country, because they can’t decide whether or not they love America more than they hate Donald Trump, just because they don’t want to support Mike Pompeo for Secretary of State. Take a look at what Huckabee Sanders had to say this morning.

Sarah HS: We certainly hope that some members will change their minds. Look, at some point Democrats have to decide whether they love this country more than they hate this President, and they have to decide that they want to put the safety and the security and the diplomacy of our country ahead of their own political games, and we’re very hopeful that they will. Mike Pompeo is a highly qualified individual, top of his class at Harvard, first in his class at West Point. He’s been an impeccable CIA Director. He’s done a great job. He was confirmed there. If you just look at history, the past Secretary of States have been confirmed unanimously-

Sarah HS: And Republicans have come on board and supported Hillary Clinton, John Kerry, people we know who they didn’t necessarily agree with on the political spectrum, but they knew how important this position was, and they didn’t play games with it, and Democrats need to do the same thing with Mike Pompeo and confirm him. He’s been one of the leading people, when it comes to the negotiations-

Sarah HS: And the conversations with North Korea.

Sarah HS: To stop that would be incredibly dangerous and damaging for our country and for the world.

Let’s get a couple things out of the way, because I know Sarah Huckabee Sanders is not a very smart individual, or at least she pretends to not be smart. First and foremost, the last two years of Barack Obama’s presidency, the House and Senate were listed statistically as the most obstructionist Congress in the history of the United States. They blocked more bills, they blocked more appointments, than any other Congress in history, so you can shut up right there.

Just because Mike Pompeo has yet to be confirmed, you don’t get to go out there and say that these Democrats are the most obstructionist in history, when we know for a fact that it is the Republicans who hold that title. That is actually a pretty easily quantifiable number that has been assigned to that particular Congress. You’re lying right out of the gate right there, Sarah.

Second of all, Pompeo is a guy who supports the torture of detainees. He supported and got angry with Obama when he closed down those CIA black sites. He is a horrible, warmongering human being that has no place being the Secretary of State of the United States. He is evil. He is going to destroy the United States’ standing around the world, even more than Donald Trump already has. He’s going to bring back those horrible things like torture, if he has his way, so is Haspel, who’s been nominated to replace him at the CIA.

We’re on a very dark path at this point, and for Sarah Huckabee Sanders to suggest that the Democrats are just doing this for political reasons because they don’t love America, because they hate Trump so much, maybe, just maybe, if you put forward a qualified person, they would be able to be confirmed. When you put up a piece of crap like Mike Pompeo, you have to expect that there’s going to be roadblocks, because apparently there are some people still in the Senate, who don’t think that we should be going around the world, torturing everybody that we disagree with.