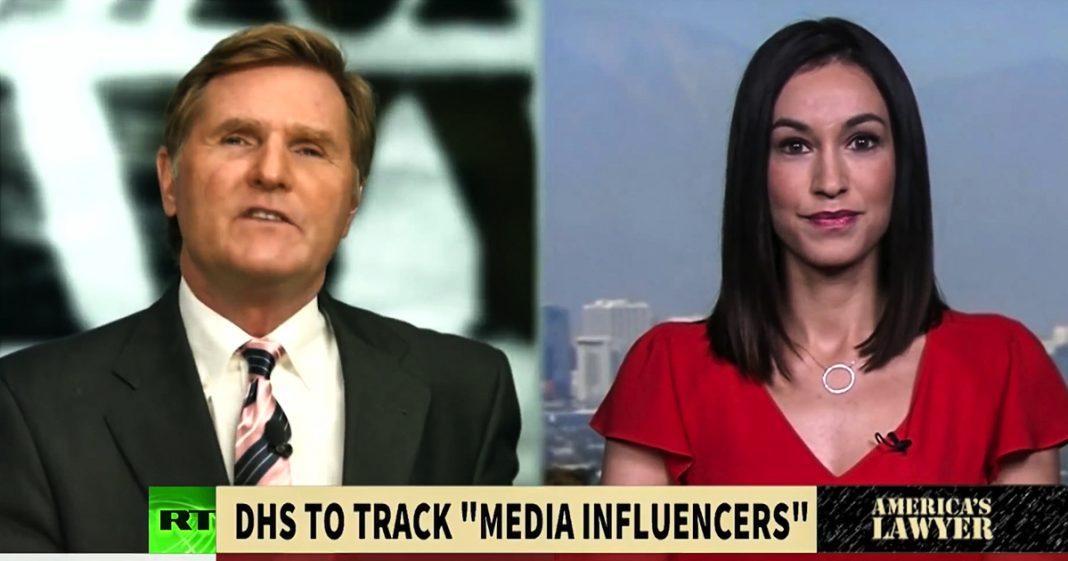 Via America’s Lawyer: Mike Papantonio and Brigida Santos talk about the DHS’s new plan to track Journalists, bloggers, and other media influencers.

Mike Papantonio: There’s been a very clear assault on journalism in the United States that’s been taking place for several years. We’ve seen journalists rounded up and thrown in jail at Standing Rock, arrested at Donald Trump’s inauguration, and even rounded up during the hate-fueled rally in Charlottesville. On top of that, cries of fake news from both the right and the left have caused a new round of headaches for journalists who’s hard work gets buried by conspiracy theories and click-bait articles.

But recently, the Department of Homeland Security decided to take the assault on the freedom of the press to a new level when they announced that they’d begin keeping a database of hundreds of thousands of journalists, bloggers, and other media influencers so they can track these people for reasons that still aren’t clear to anybody. This is a clear assault on the First Amendment’s guarantee of freedom of the press and an attack on the independence of journalists in the United States if reporters feel that government might be looking over their shoulder, it’s going to be a chilling effect on the already suffering state of American media.

For more on this, I’m joined by RT correspondent, Brigida Santos. Brigida, tell us what kind of information the Department of Homeland Security is trying to obtain and who are they targeting? What’s going on here?

Brigida Santos: Mike, the Department of Homeland Security says it plans to track and monitor any and all media coverage to the Department of Homeland Security, or related to any particular events that it feels like monitoring. Now they’re going to be looking at over 290,000 global news sources across all mediums including print, broadcast, blogs, you name it. They’re also going to be targeting, monitoring, and tracking individual industry professionals, which includes editors, journalists, correspondents, bloggers, and as you said, influencers in order to determine their sentiment and attitudes based on their output.

Mike Papantonio: Well Brigida, it seems like there would be massive pushback by even the corporate media, as dysfunctional as the corporate media is, you would think that there would be massive pushback from corporate media. What kind of chilling effect could this have on media in the United States going forward? I mean, to have the government, to have Big Brother looking over your shoulder and saying, “Well, you’re saying something we really don’t like.” Media has no idea what are you using it for, why are you taking this information? Who’s following me on the blog? Who’s following the stories that I’m doing? First of all, the fact that corporate media’s not doing stories on this is remarkable. I’m hoping they’ll start. What’s your take?

Brigida Santos: Well, the reason the corporate media is not pushing back is because a lot of the corporate media is controlled by government interests, be it weapons manufacturers, so for them it may not be such a big deal, but for individuals who might be put into this database, it could have a very chilling effect because people will start self-censoring. So even though this is not a law that’s being passed directly to curb freedom of the press and freedom of speech, it does lead to self-censorship for certain journalists and influencers who don’t want to get put on this list, so they may stop covering certain stories out of fear of that happening, Mike.

Mike Papantonio: Yeah, I mean on this show we cover stories about the nature of failures of the FBI, the Department of Justice, FDA, EPA, so somebody up there in I suppose Oz, which is media Oz, is going to make a decision. I don’t like what Papantonio and Brigida said, we’re going to start following them, to what end? It’s not even clear. The point that you just made Brigida is a very important point. Corporate media is part of the problem in a lot of ways.

People don’t understand. Bezos for example, here you got he owns The Washington Post, we’re giving him billions of dollars under federal contracts to spy on everybody. And if you don’t think that the same thing is happening with Facebook or any of the other entities that are now really part of corporate media. They may say, “No, we’re independent. We’re social media. We’re really not corporate media.” That’s nonsense.

Brigida Santos: I mean absolutely, you’ve got it correct there. Now the Department of Homeland Security, I find it very crazy that they had tweeted one of their press secretaries quote, “Despite what some reporters suggest, this is nothing more than the standard practice of monitoring current events in the media. Any suggestion otherwise is fit for a tinfoil hat wearing, black helicopter conspiracy theorists.” But that’s absolutely a bizarre thing to tweet and it doesn’t take a tinfoil hat wearing conspiracy theorist to be worried about the government expanding its mass surveillance tools, which is exactly what this is doing here, Mike.

It’s very troubling. This is absolutely going to curb free speech and freedom of the press, and in the United States, we already have state media, we just don’t call it that. I don’t know how many outlets you turn on, on TV and you see on the news every day some former administration official as a regular contributor, promoting the government’s official line, Mike.

Mike Papantonio: Brigida, the story that you and I … I think you and I did this story when it came out, it was the propaganda department that Obama actually signed off on millions of dollars, to having the US with a propaganda department. Okay, now what was the propaganda … By the way, people missed this story. Corporate media barely talked about the story, but what the propaganda entity is that Obama signed off on, it was funded with hundreds of millions of dollars, is to be able to say, “We’re going to find people in the media who are willing to attack people in the media who are saying things that we don’t like.”

Now that’s a story that corporate media totally missed. This is merely an extension of that if you really think about it. Now we got Homeland Security saying, “Now we’re going to go after people that we don’t like, and we’re going to do it under this new law. We’re going to do it under the propaganda organization that was put together by Obama that he quietly signed in literally in the middle of the night.” The media never picked up on it. We now have a full-fledged propaganda department where they hire journalist like maybe The Wall Street Journal to go after people that they don’t like.

Brigida Santos: Mike, as you said, Journalists have already been attacked for covering the inauguration protests that turned violent. Journalists have also been arrested for covering the protests at Standing Rock, and then you also had that congressman who body slammed a reporter for The Guardian, so of course, these are attacks that should be taken very seriously, and we don’t need to be empowering other departments to attack press further, Mike.

Mike Papantonio: Well first of all, the Homeland Security thing already began to spin out of control over the last several years. But this new iteration is … You got to ask yourself, what’s going to happen to investigative journalism? If Homeland Security’s looking over everyone’s shoulder, how do you do an investigative piece on Homeland Security when you’re inching closer and closer to having a state-controlled media that actually props up, in a sense props up a corrupt administration or promotes endless wars, or has corporate America just right at the center of everything that we read, everything we see.

Right now, if you take this problem with Homeland Security being the new propaganda agency, you add to that, that you already in the United States only have four entities, four corporate entities that control all of the media. Wow, I mean this has ended up … This is a train wreck for journalism in the US, isn’t it?

Brigida Santos: It absolutely is and going back to the investigative journalism, as I said journalists are going to start self-censoring. They may stop applying to get visas to go overseas and cover certain stories that they think is going to get them on some sort of list with the Department of Homeland Security. This is a very, very dangerous.

Mike Papantonio: Brigida, as I look at this story, I can’t help but think two weeks ago I think I saw you covering this story on one of the RT shows, and it had to do with Bezos. It had to do with the idea of how now we have corporate media that’s become so tied at the hip with what you used to call … There used to be a division between media and the government, but now we have this bleed over. We’ve got Bezos, owns The Wall Street Journal, owns Amazon. He’s able to deliver whatever kind of trend in media that he wants. Add that now to the fact that the US government is giving him billions of dollars worth of contracts, basically to be their upfront boy.

In other words, so you got corporate media that totally loses independence. You’ve got this entity now with the Homeland Security, we don’t know what in the world they’re doing, we don’t know what they’re doing with the information, why they may be watching this program for whatever reason, or what they might do with that information. You’ve got this blend now that really kind of should scare the bejesus out of everybody that understands what the First Amendment’s all about. What’s your take?

Brigida Santos: Yeah, and journalists are going to be very worried because this is going to be a searchable database that’s going to have individual journalists and other media professionals personal information on it, like their addresses, their phone numbers, their employment details. It’s incredibly terrifying for somebody who’s on the other side, supposed to be watching the watcher’s here, but unfortunately the Department of Homeland Security has decided that its best interests lie in controlling the media, which I guess in turn is protecting the government because none of their secrets will be getting out now, Mike.

Mike Papantonio: Yeah, J. Edgar Hoover has won. This is exactly what he wanted when he was involved with spying on literally everybody in America and then we thought we did something about it. We thought we stopped it with the Church hearings, and now it’s back, full-tilt. Thank you Brigida.