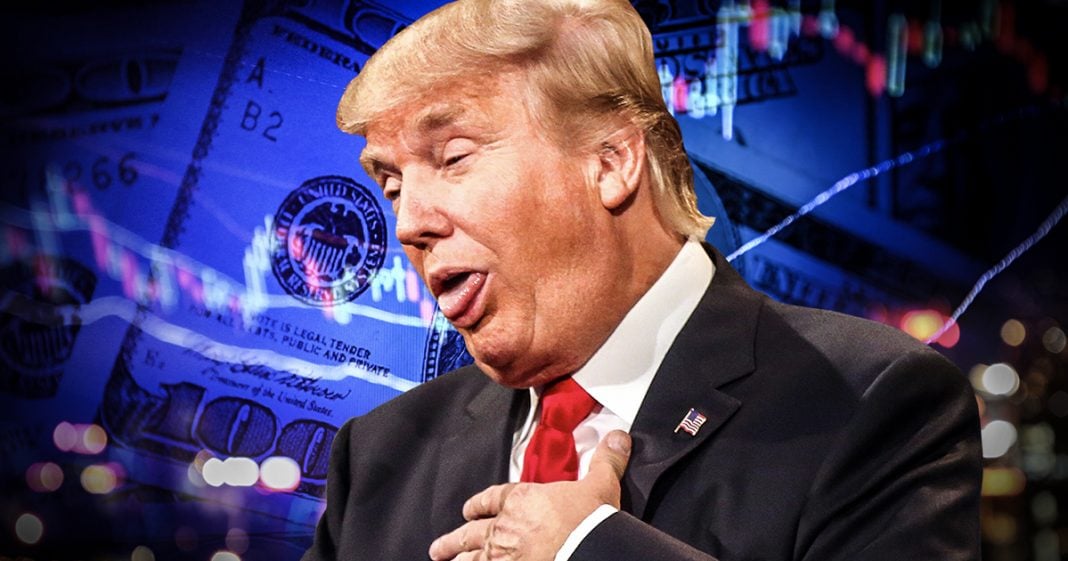 According to a new analysis by The Wall Street Journal, the biggest banks on Wall Street have already seen a benefit totaling about $2.5 billion from the Trump/Republican tax cuts. That’s $2.5 billion back in the pockets of the greediest people in this country. Meanwhile, American workers are reporting little to no savings or benefits from the tax cut package, which was completely expected and predictable. Ring of Fire’s Farron Cousins discusses this.

According to a new analysis by The Wall Street Journal, the top Wall Street banks in the United States in the first three months of this year have collected a combined $2.5 billion from the Donald Trump Republican Party GOP tax scam. $2.5 billion for just a couple banks, 100% from the Republican tax scam. Those banks are Goldman Sachs, J.P. Morgan, Citigroup, and Wells Fargo. All four of them together sharing $2.5 billion in tax breaks from the Republican Party, but don’t worry, it’s not just the Republicans who are helping out the big banks. Right now there is currently a deregulation bill making its way through the House and Senate that has plenty of Democratic support that is going to only further increase the profits of those major banks, and make it all the more likely that they’re going to get involved in risky behavior that’s going to lead us to a brand new economic crash at some point in the very near future.

Also, according to the report from The Wall Street Journal, workers aren’t getting a damn thing. Only 13% of American workers have gotten any kind of raise, bonus, or other incentive since these Republican tax cuts were put in place, and most of those are the people who’ve reported getting that one-time bonus from their employer. When you’re talking about just four banks that have made $2.5 billion between the four of them, those thousand-dollar bonuses to maybe 100 workers, they start to look like crumbs, don’t they? Just like Nancy Pelosi told us, because in reality, that is crumbs. If your employer gets $750 million in tax cuts in just three months but you get a thousand dollars before taxes once, wouldn’t that be a crumb off of what these other folks are getting?

The American public is not going to get these tax cuts. We’re not going to get the money from it. We never do. We never have. History has shown us that, and anyone who believed it would happen is an absolute idiot who needs to go back and study the history of trickle-down economics. Everybody was warned, and that’s probably why a majority of the American public still thinks these tax cuts were a bad idea, but nonetheless on tax day this week, you had Donald Trump out there, you had Paul Ryan out there both on Twitter telling us that American workers across the country were getting raises. They were doing so much better. They were seeing so much more money in every single paycheck of theirs. There was no truth to that statement.

However, and this is how the con works, the people who see those tweets, who support Ryan or Trump, they believe it. They understand that they can look at their paycheck and not see an increase, but they assume, because the president is saying it, that there must be plenty of other people who are getting the raise, so good for them. I’m going to be happy for them. Yeah, I didn’t get it, but obviously, according to Trump, my neighbor did, never once bothering to check with that person and say, “Hey, did you get a raise or a bonus, just curious?”

No, they didn’t. Neither did your other neighbor on the other side, or the person that lives behind you, or the family down the street, or the people in your workplace, because it’s not going to happen. That was never the goal of these tax cuts. The goal of the tax cuts was to give as much money as possible, 1.5 trillion to big banks, to corporate CEOS, and to the already wealthy elite. It was a subsidy for people who are already rich. The poor, the needy, the middle class, the working class, the people who go out there every day and make this country actually run properly, we don’t get a thing from this because the Republican Party doesn’t care about us.