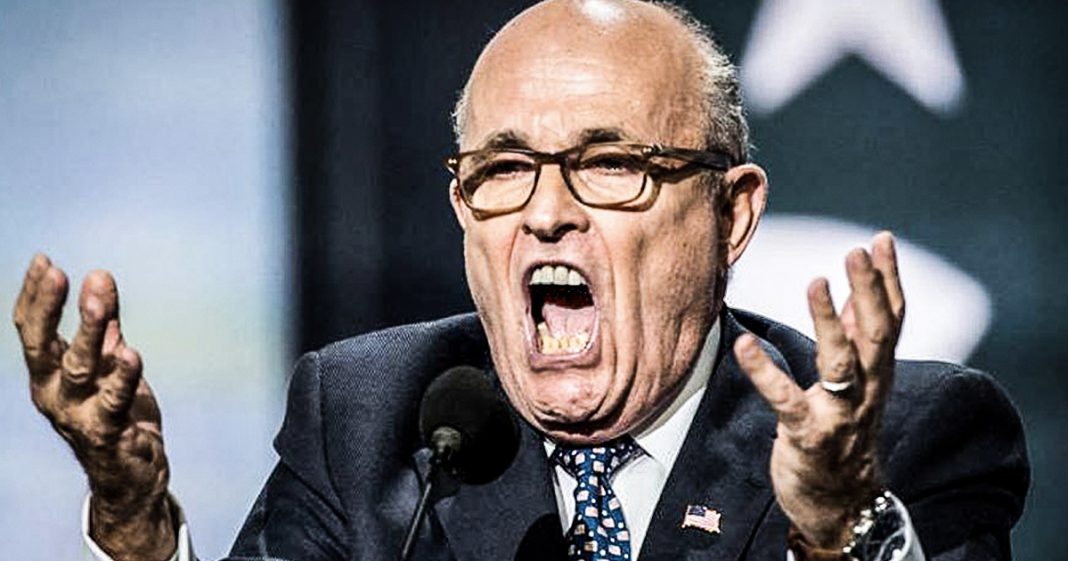 It almost feels like Donald Trump is trying to lose his case against the special prosecutor’s office, and his decision to hire Rudy Giuliani to his legal team seems to bolster that claim. The announcement of the addition of Giuliani has less to do with Mueller and more to do with the goings on in New York City, in spite of what Giuliani claims. Ring of Fire’s Farron Cousins discusses this.

On Thursday afternoon, it was announced that Rudy Giuliani, the former mayor of New York City, the failed Republican candidate for the 2008 Republican primaries, that he would be joining Donald Trump’s legal team because Donald Trump’s current lawyers believe that Rudy Giuliani can come in there and convince Robert Muelller to go ahead and just wrap up this whole investigation thing. Now there are several things very, very wrong with putting Giuliani in this position on Trump’s legal team, not the least of which being the fact that this guy hasn’t really been an actual lawyer for well over 30 years. The last client he actually did represent in court was back in 2006, and that was after many, many years of a break and he really didn’t do anything afterwards. He just kind of showed up at this law firm that he co-owns to act as their representative because they thought having a high-profile person in the courtroom for that would help the company’s chance.

The company that Giuliani was in court representing happened to be Purdue Pharmaceuticals, the makers of OxyContin. They were in court because in 2006, it was revealed that they had lied to regulators and investigators about how addictive opioid painkillers like OxyContin actually were. Rudy Giuliani did such a great job representing them, after being out of the courtroom for decades, that they had to pay almost $700 million fine for lying to everyone and, of course, now today, 12 years later, we know the kind of trouble that opioid makers like Purdue Pharmaceuticals are currently in. So, yeah, Giuliani, probably not the best guy to represent you because we’ve seen the very few organizations that he’s represented in the past, and 12 years later, they’re still in very hot legal water.

There’s also the fact that Giuliani has nothing to do with Robert Mueller. That’s not why he came on the team, and that’s an absolute lie if the administration is telling us that’s why they brought him in. They brought Rudy Giuliani onto Donald Trump’s legal team because he knows how to navigate New York City, or at least the legal system of New York City. Right now, New York Attorney General Eric Schneiderman is working to prevent Donald Trump from being able to pardon anyone prosecuted within that district. That’s important because, as we all know, Jared Kushner is under several investigations just in New York, and there’s other investigations going on into Donald Trump himself and other members of the Trump Organization in New York.

Giuliani was brought in to help circumnavigate that. This has nothing to do with Mueller. This has everything to do with all of the other investigations into Trump and his business and his family and their businesses. That’s what Giuliani is doing on that team. Do not believe for one second that anyone, including Giuliani himself, believes that he’s going to work out a deal with Robert Mueller to go ahead and just wrap up this investigation. This investigation gets wrapped up when they finish, when they come to a conclusion, when they find whatever it is they’re looking for or realize that what they’re looking for cannot be found because it does not exist. That is how investigations end.

Donald Trump’s legal team knows that. Giuliani knows that. This is such crap that they’re saying, “Oh, well, he’s going to work with Mueller to kind of wrap this thing up.” No, no, no, no. He’s going to pretend to be working with Mueller. They want the public to think he is, but in reality, he’s going to go talk to Schneiderman, try to work their way around this whole pardon issue, find out what Schneiderman and other investigators in New York City know so that they can prepare Donald Trump and prevent him from being indicted in that city as opposed to the federal indictments that might be coming from the Mueller investigation.

The Trump Administration knows what they have done. Donald Trump is well aware of what his businesses have been involved in and what his family’s been involved in, and clearly, he’s much more worried about the investigations in New York than he is about the one being conducted by Robert Mueller, and that should tell us something.