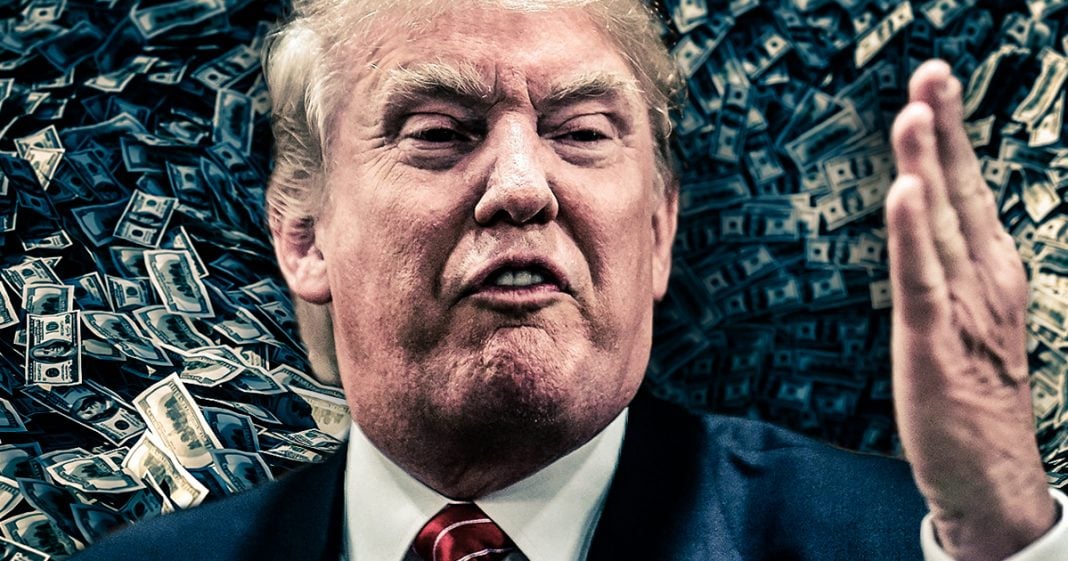 According to a new report by CNBC, Donald Trump is using money donated to his reelection campaign to hire law firms to bully his critics into submission. When Michael Wolff’s book “Fire and Fury” was released earlier this year, the Trump reelection campaign paid a law firm $93,000 to go after both Wolff and Steve Bannon for the claims the two made in the book. This is money that donors both big and small and giving to Trump, and I’m confident that they don’t want their donations being used to defend the President from the media. Ring of Fire’s Farron Cousins discusses this.

Here’s some interesting news for anybody who has given money to Donald Trump’s reelection campaign for 2020. It turns out that your money is actually not going towards reelecting the president, and instead, most of it is being paid out to law firms whose job it is to go and bully members of the media, to go and bully authors who write anti-Donald Trump books. According to a new report by CNBC, the Trump Administration, this year alone, has paid out over $93,000 from their Trump reelection campaign just to try to silence Michael Wolfe back earlier this year when his book, Fire and Fury, came out. They also attempted to silence Steve Bannon, who was a major source for that book, by saying he violated the nondisclosure. They paid a law firm to send him cease and desist letters. Same thing with Michael Wolfe, because they didn’t want any of this anti-Trump stuff to go out into the media.

There was another instance. They paid out $376,000 to the law firm of Jones Day to an issue related to Robert Mueller, the special prosector. They wanted to reach out to media outlets, they wanted to silence media outlets from reporting on it. Another incidence, where is it here, $186,000 to another law firm in the first three months of the year, all with the purpose of silencing Donald Trump’s critics. Here’s what’s fun about this. I know there’s a lot of individual donors out there on the Republican side who’ve paid money to the Donald Trump reelection campaign, but there’s also a lot of corporations who’ve given money and thought that, hey, we’re going to reelect this guy because he’s letting us do whatever the hell we want in this country and treat it like a keg party from college.

But that money’s not being used for any of that. That money is being used because the guy you support has such a fragile and tiny little ego that he can’t stand when anybody gets in the media and says something negative about him. He can’t stand that he’s under investigation, so he’s trying to discredit Robert Mueller and everybody involved in that. He can’t stand that everybody in this country doesn’t love him, and by god, he’s going to spend all of your money if he has to, hiring bully law firms to go out there and silence authors, silence reporters, silence media outlets, just because he has such thin skin that he can’t even take the littlest bit of criticism. That’s where the money that you’re paying into Donald Trump’s reelection campaign is going.

So my advice to you, while I love to see Republicans piss away money on things that don’t matter, I do have to say you should probably stop donating money to Donald Trump because he’s only going to use that to try to make his critics go away. And that’s only going to make his critics get even more vocal about how horrible and corrupt and pathetic Donald Trump truly is.