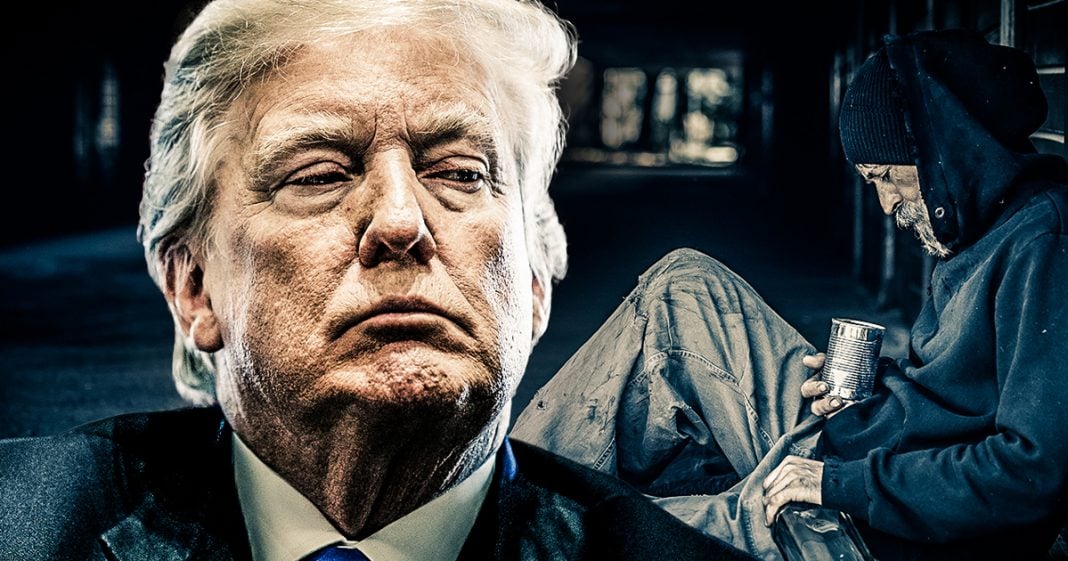 In a move that was barely noticed due to the increasing number of distractions with this presidency, Donald Trump signed an executive order last week that requires several government departments to implement work requirements for people seeking federal assistance. Departments like HUD, Health and Human Services, and Agriculture will now force people to get a job or be kicked out of federal housing, lose their farm subsidies, or lose Medicaid and food stamps. Ring of Fire’s Farron Cousins discusses the Trump administration’s war on the poor.

In a move that was very under-reported from last week, Donald Trump signed an executive order that is aimed at scaling back federal assistance programs for needy American citizens. Here’s what happened. He signed this executive order that orders government agencies like Health and Human Services, Housing and Urban Development, Agriculture, and several other agencies to require anyone receiving federal assistance administered through that department to have a job. So if you want Medicaid, if you want food stamps, if you want those agricultural subsidies that help keep American farmers going during the slow seasons, or when there’s a flood, or drought, or whatever, destroys other crops, if you want that, you got to have a full time job. Otherwise, this administration says, “To hell with you, get out.”

That’s not how federal assistance programs are supposed to work, and it also shows that this administration has a very gross misunderstanding of why people are on these programs to begin with. I am sick and tired of hearing these republican talking points that, “Oh, these people on federal assistance programs, people on food stamps, or welfare, or Medicaid, they just need to go get a job.” Yeah, most of them have jobs, and the ones who don’t, it’s most likely because they are physically incapable of working in this country. It’s not because they’re lazy people living off their 20, 30 bucks a week. It’s because they physically can’t, or they already are, but it’s not enough because capitalism in this country has reached a point where it just absolutely sucks.

It’s not their fault. They’re trying. They did try. Maybe they got in an auto accident. Hell, maybe, maybe they got injured on the job and didn’t get any kind of compensation for it because Republicans have scaled back workers’ compensation protections. Whatever the case, these are not lazy, ingrateful people trying to live off the government’s teat. These are people who are out there doing everything they can to survive, and now the Trump administration, with backing from the Republican Party, wants to come up and say, “You know what? If you don’t have a job, you’re screwed. You can go live on the streets, but oh-oh, we’ve already passed all these anti-homeless-people laws at the state and local level so you can’t even go sleep on a park bench. You got to go hide yourself in the bushes because if we see you, we’re going to arrest you.”