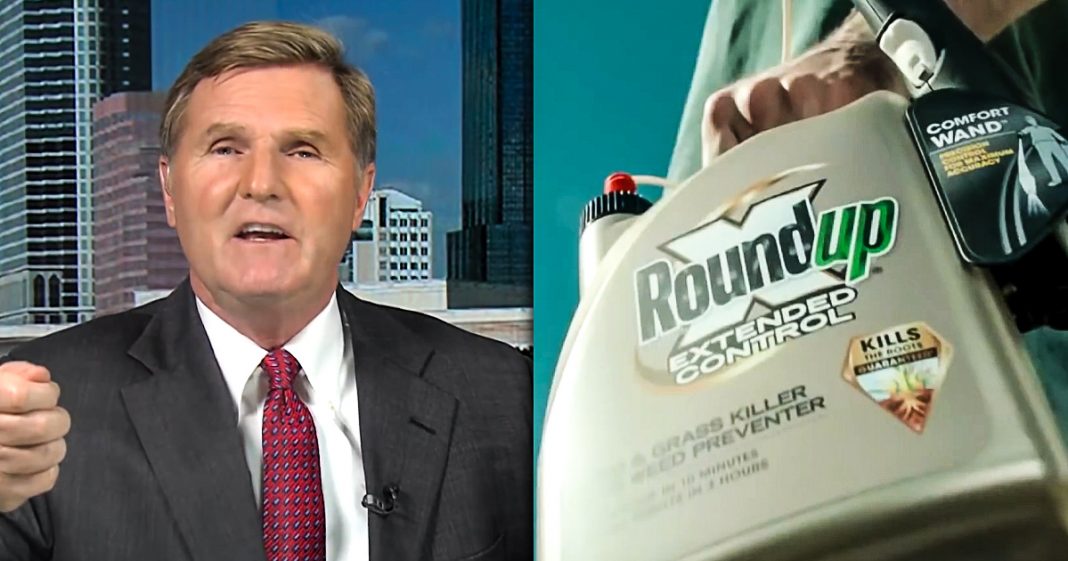 The World Health Organization run through the UN, determined that Roundup would cause cancer. They weren’t equivocal about it. America’s Lawyer Mike Papantonio joins Lee Camp to discuss.

Lee Camp: I wanted to move on now to another screwed up corporation. You have a lawsuit coming up against Monsanto over this Roundup issue. I guess the WHO finally announced that Roundup was likely carcinogenic, there’s been some stuff in California as well, what’s going on with that?

Mike Papantonio: Well, everybody focuses, this story that you focus on is the big story. It’s the WHO the World Health Organization run through the UN, determined that Roundup would cause cancer. They weren’t equivocal about it, they said it’s probably going to cause cancer in human beings. Everybody focuses on the WHO study.

The truth is Lee, there’s about two dozen studies that show that Roundup causes everything from Parkinson’s disease to all types of cancer. Non-Hodgkin’s lymphoma, leukemia, a brain cancer in children, birth defects. These studies are all over the place, it just so happens the media, who is brain dead, I mean the corporate media, who is brain dead on this topic, because if you turn on the TV tonight, you’ll see Roundup advertisements about every 30 minutes.

They’re making so much money from Monsanto, they won’t tell the story about how dangerous this stuff is. As a matter of fact, when you see that ad tonight, you’ll see a person in shorts, in a short sleeve shirt, just out spreading Roundup like there’s no problem. If you look at what the internal documents say, the internal documents say that that person should have long pants, gloves, goggles, covered up totally, because what happens is the Roundup is … 80% of the Roundup, the products in Roundup are absorbed into the skin, and once they in the skin, it stays systemic, it moves through all your organ systems.

Lee Camp: Yeah. The glyphosate gets into nearby neighborhoods, it’s not like it has to be sprayed in your face to end up in-

Lee Camp: … your food and in your lives and everywhere else. It’s really disgusting. Then they fund their own scientists to try and say it’s fine, it’s not going to hurt you.