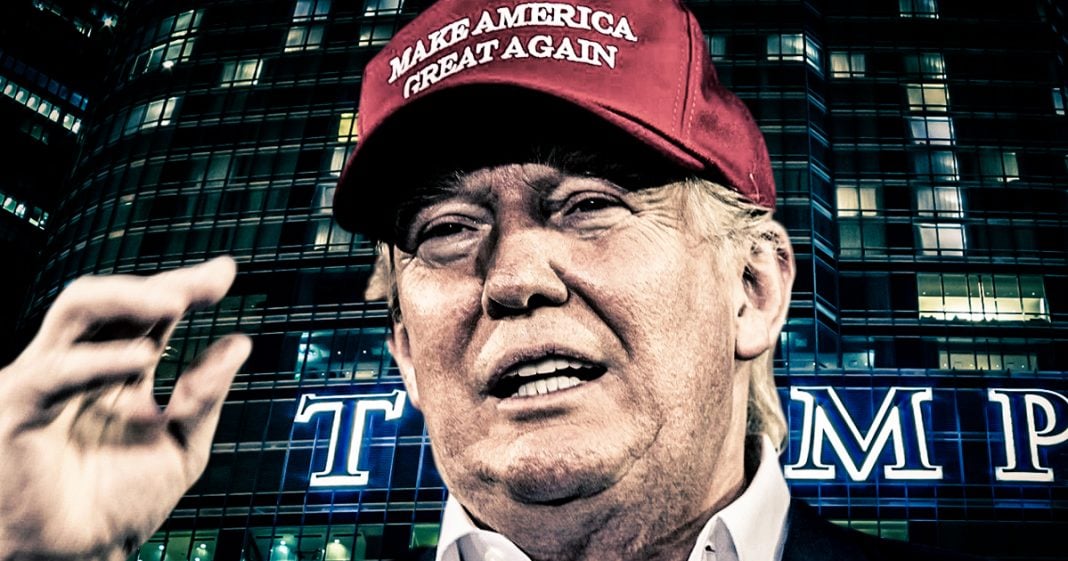 According to a new report by Public Citizen, Donald Trump is pocketing millions of dollars by renting out his properties to political groups and government agencies. This is a massive conflict of interest for the President, but so far he has managed to pull off his massive con on the American public with little to no repercussions, increasing the likelihood that stories like this are going to become the norm. Ring of Fire’s Farron Cousins discusses this.

As it turns out, ever since 2015, when Donald Trump first announced he was running for President during the Republican primaries, he has pulled in well over $15 million through the end of 2017 due to the fact that he is now a high-profile American politician and, as such, political organizations want to go and hold events at his properties, possibly even have him show up and help raise a little money for them. In the last two and a half years, this man has made $15 million just because he became President of the United States.

Here’s what’s happening, as Public Citizen explains it. People want to piggyback off the Trump name, specifically Republicans, but it’s not just limited to them, and we’ll get to that in a second. You have political action committees, even some run by Mike Pence, or that run for his support, or whatever. They’re using Trump properties and they’re paying high price top dollar, and often they pay an inflated price above what a member of the general public would pay, to go and hold an event at these organizations. As we know, Donald Trump has not divested from his properties, so that money goes right back into his pocket. Not only are they trying to use his name for political gain, but he’s using them to make himself even richer.

Why? Because they’re doing that with our tax dollars. That’s my money. That’s your money. Do you want that money going into Donald Trump’s pocket? Because that’s where it’s going. That’s how this man is getting even richer from being the President of the United States, and that doesn’t even begin to touch the stuff in the report that Public Citizen mentions about all of the foreign organizations that are also coming and doing events and staying at Trump Towers or Trump hotels because they think it’s going to get them in good favor with the President of the United States, and to be honest, it probably will.

Because every dollar that you spend at a Trump property is going right back into that man’s pockets. Maybe not the full dollar, but we know he doesn’t pay his employees well. We know he doesn’t pay his contractors all the time, so most of it’s probably going right back into that man’s pocket, because he refused to do what was necessary and divest from his properties, divest from his businesses, in order to take on the role of the President of the United States.

I encourage everybody to read this full Public Citizen report because it explains, in simple terms, exactly how Donald Trump has conned every single person in this country, and how he is using the office of the presidency to make himself even richer.