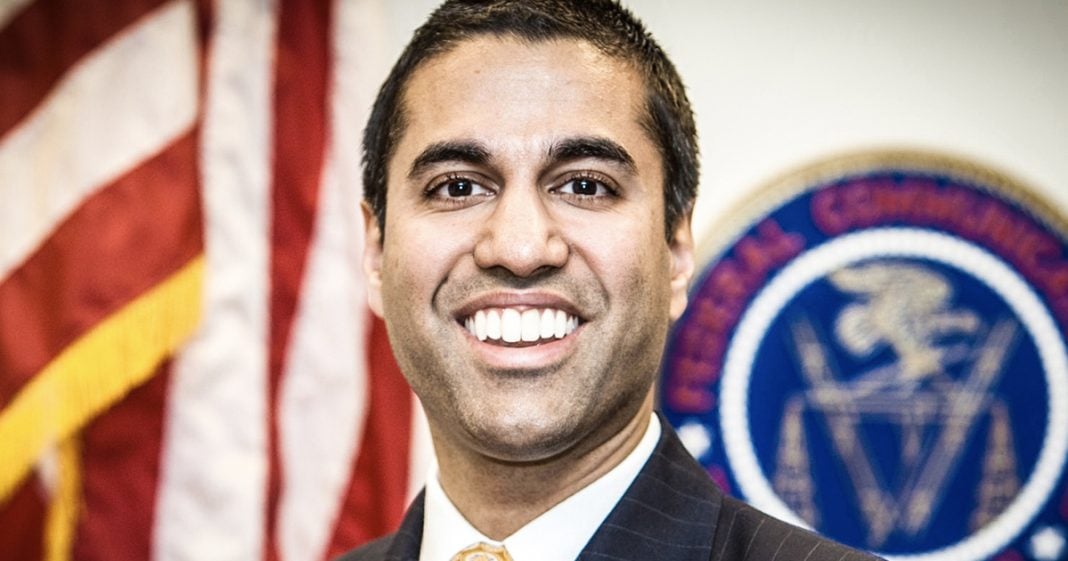 Ajit Pai, the chairman of the FCC, had personally picked Elizabeth Pierce to be the FCC’s broadband advisor because he believed her business experience would be an asset to the agency. But her time at the FCC was short-lived, because her business deals were less than honest, and last week she was arrested for defrauding investors. This is what we’ve come to expect from every single aspect of the Trump administration, as Ring of Fire’s Farron Cousins explains.

If you needed any more evidence that the Trump Administration is basically just one big criminal enterprise, then take a look at the story of Elizabeth Pierce. Ajit Pai, the chairman of the FCC last April chose Elizabeth Pierce for his Broadband Advisory Group. She was going to be in charge of it. What this group was going to do is they were going to go around the country and find regulations that they didn’t like, that they claimed were impeding broadband service to certain areas, and they were going to recommend that we get rid of those regulations. She was going to be the woman in charge of this group, handpicked by Ajit Pai, until she had to resign last October.

The reason she had to resign last October is because she was under criminal investigation for wire fraud. You see, the company that she ran, Quintillion up in Alaska, it turns out they forged and falsified a bunch of documents, showing a ton, millions of dollars’ worth, of future sales. They then took that forged, fraudulent information to investors and said, “Look at all this money we’re going to make. Would you please invest in our company?” They did, based on the phony information.

Last week, Elizabeth Pierce, the woman who was handpicked by Ajit Pai to run this Broadband Advisory Group, was arrested and now faces up to 20 years in prison. Again, she had left the advisory group, that she was in charge of, back in October of 2017, so she’s been gone from the Administration for a good six months. The point is, that is the kind of person that this Administration attracts. It attracts the criminals. It attracts the fraudsters. Those white collar people, who should be in prison, are the ones who are so drawn into this Trump Administration.

Ajit Pai’s no different. Scott Pruitt’s no different. Ryan Zinke, Steve Mnuchin … They’re all the same. They have no morals. They have no courage. They have no fortitude. It’s just a bunch of people wondering how rich they can get off of their government jobs, how much money they can swindle away from taxpayers, and how long can they do it before they get caught. At least in the case of Elizabeth Pierce, she got busted before she could do any real damage. The same can’t be said for some of these other folks that Trump has put into power.