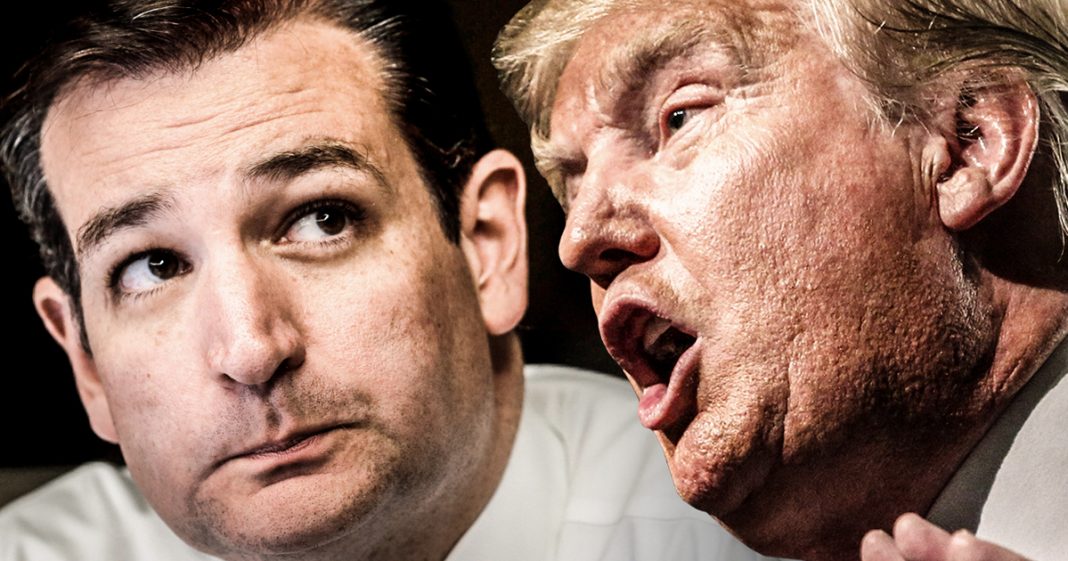 TIME Magazine recently released their list of 100 most influential people, and Ted Cruz was given the “honor” of doing the write up for Donald Trump. Rather than going after the man who repeatedly attacked his family and him personally, Cruz wrote a flattering profile of the man that made his life hell during the primaries. Cruz needs Trump’s help to win his Senate race this year, but this column has only shown what a spineless coward he truly is. Ring of Fire’s Farron Cousins discusses this.

For months during the presidential primaries leading up to the 2016 presidential election, Donald Trump relentlessly attacked Republican Senator Ted Cruz. He would call him lying Ted Cruz. He helped spread the conspiracy theory that maybe Ted Cruz’s father was somehow involved in the Kennedy assassination. He attacked the guy’s family. He attacked his wife, his supporters, which Donald Trump supported, attacked his wife’s appearance. He spent months degrading and dehumanizing Ted Cruz to the point where many people thought maybe Ted Cruz was just going to stop with the whole political thing because he’d been beaten and bloodied so badly by Donald Trump, but no, not a guy like Ted Cruz.

Being in politics is all this guy has, so it was actually really shocking earlier this week when Time magazine put out their list of 100 most influential people, Donald Trump was obviously on it, because for good or bad, he is influential, and for every single person on that list they had somebody do a writeup for them, somebody who themselves was slightly influential. For Donald Trump, it was Ted Cruz who got to do the writeup. Rather than using that opportunity to fire back at him on the attacks on his family, the attacks on him personally, and all the damage he’s caused the United States, Ted Cruz decided to lavish the president with praise in an attempt to get back on his good graces.

As Donald Trump himself has said, we can’t trust anything that comes out of Ted Cruz’s mouth, because he’s lying Ted Cruz, so I guess that means, according to the man that Ted Cruz is praising, we shouldn’t believe what Ted Cruz is writing about Donald Trump. Now, I know that’s a little bit of circular logic there, but that’s what’s happening. The reason Ted Cruz decided to write this fawning review of Donald Trump, is because Ted Cruz is in very serious trouble in the state of Texas right now. The latest polls show his opponent, Beto O’Rourke, the Democrat running for Senate against him, is within striking distance. The two of them in the latest round of polling are within the margin of error for the poll of being tied. Ted Cruz, who was once seen as one of the safest senators in the United States, could very easily lose his election in this year’s midterms.

That’s terrifying Ted Cruz, so he’s putting the best wishes of his family aside. He’s putting his own personal wellbeing aside, and instead trying to do whatever he can to suck up to Donald Trump in the most disgusting way because he needs somebody, anybody, out there helping him, because he is facing the election of a lifetime here. If Donald Trump doesn’t swoop in and try to save him, or hell, if Donald Trump does come in and maybe does a rally for him down there in Texas, that could be the end of Ted Cruz’s political career. Hopefully, it will be. We need far fewer Ted Cruzes in the United States government. He’s shown that he doesn’t have a spine. He’s not willing to stand up to a bully, even when that bully is insulting his family.

He’s shown that he’s going to side with corporations and then somehow make it sound like that’s for the best interest of the American public, because that’s what Ted Cruz cares about, or at least that’s what he said he cares about in all those town halls, but in reality it’s all about his donors. Ted Cruz’s time in the Senate is up, and let’s hope that the voters in the state of Texas understand that when they go to the polls this November.