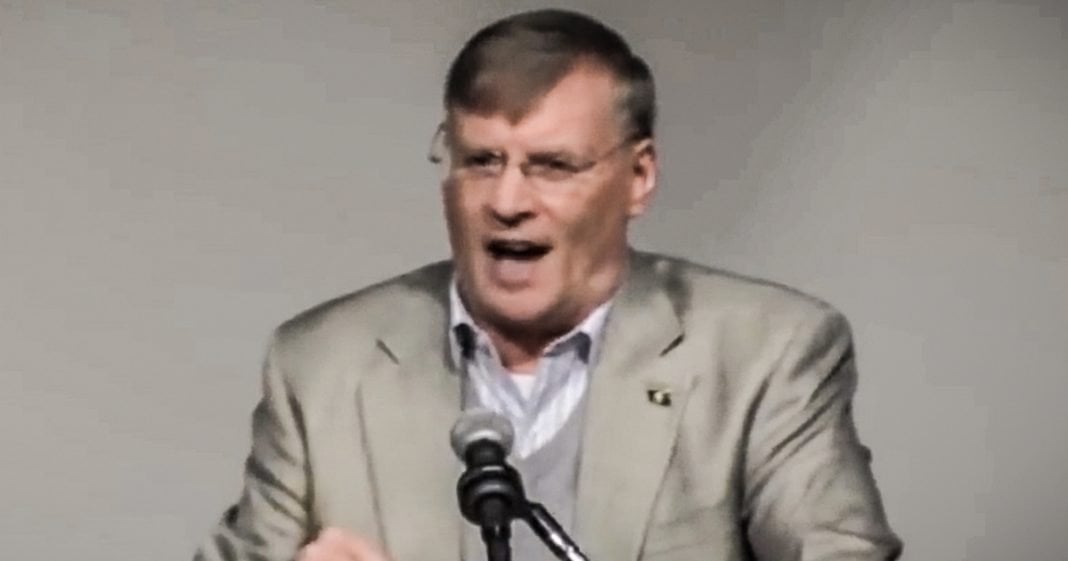 Pastor Chuck Baldwin of Liberty Township sees the hands of Satan everywhere. The latest attack from the devil and his minions has come in the form of gun control, according to Baldwin, who believes that any form of regulation on firearms is an “attack from Hell.” This is why people are abandoning religion, as Ring of Fire’s Farron Cousins points out.

The Liberty Fellowship Church in Montana under the leadership of former constitution party presidential candidate Chuck Baldwin, believes that America is under attack by Satan and his minions. Recently, during a sermon, Baldwin discussed this new attack that Satan has launched on the United States, take a look.

Chuck Baldwin: I tell you the truth. Satan and his minions have in their minds determined that now is the time to attack the God-given duty and liberty of people to defend themselves, and to take away from us our ability to do that. This is a concerted attack not from liberal Democrats neocon Republicans, this is an attack From Hell itself.

That’s right folks. As Baldwin says, it’s not the radical left or the liberals, it is Satan himself who has come to the United States to take away their God-given right to own AR15s. Now this was a shock to me, first and foremost, because I have yet to see Satan walking around taking guns away from people but more importantly, I miss the part in the Bible were they mentioned that we have a God-given right to own guns. It was just kinda shocking to me because as far as I can tell, when Jesus walked the Earth, for the New Testament, Guns didn’t exist. It was incredibly shocking to understand that even though something that didn’t exist at the time, was a God-given right at the time the Bible was written. So wow, thank you Chuck Baldwin for finally letting us know that God said, maybe I guess to you personally, that we have a right to own a gun because yeah, that falls right in line with every single kind of biblical teaching out there. Jesus said unto the poor, “Back up or I’m going to shoot you.” That didn’t happen.

These people, like Chuck Baldwin, are why we have Americans abandoning religion at a fevered pitch. Young people in this country are leaving the church because of the massive amounts of hypocrisy that they see, and Chuck Baldwin is a prime example. This fight over the Second Amendment and increasing our gun controls in this country, has nothing to do with religion. And yet, you’ve got idiots like Baldwin out there trying to convince his flock that, yeah, Satan’s out there. He’s trying to take your guns away through these liberals, but don’t let them.

Now the full link to that clip is in the link in the video description and I strongly advise everybody to go through and watch the whole thing. Because it actually gets even crazier than the little part we just showed you, because he talks about the metaphorical and physical armor that God has given us. We have our spiritual armor that God provides us with, but also the physical armor that you can go out and buy to protect yourself from these God-given guns. That’s how insane religion has become in the United States today, so it’s no wonder why we have so many people in this country abandoning the church and doing their faith their own way, on their own time, however they want to do it, in a way that doesn’t involve being told by old crusty white guys what rights God didn’t actually give us, just so they can convince a bunch of easily manipulable people that we have to go and fight for the Second Amendment, otherwise Satan wins.