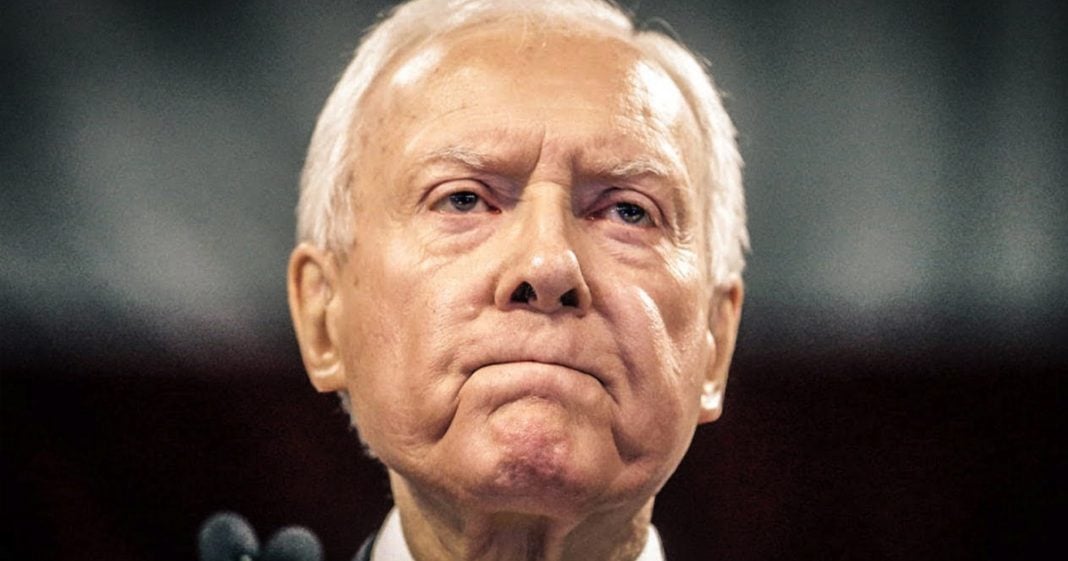 Republican Senator Orrin Hatch was nearly apoplectic this week when Senator Tammy Duckworth decided to bring her newborn infant to the Senate chambers, following the passage of legislation to allow such a move. Hatch whined that this could escalate the release of babies onto the Senate floor and he wondered aloud “what if there are ten babies?” Ring of Fire’s Farron Cousins attempts to decipher the rantings of this elderly lawmaker.

Republican senator Orrin Hatch is apparently afraid of some kind of baby invasion taking place on the floor of the United States senate after a legislation was passed to allow new mothers in the senate to bring their infant children onto the senate floor so that they can have their child and be present for votes as votes are required to be taken in person. Senator Orrin Hatch wondered out loud, “But what if there are 10 babies on the floor of the senator?” So, the whole thing started with Tammy Duckworth as most people understand just had a baby. She brought the infant into the senate after a legislation was passed to finally allow that, and Orrin Hatch is kind of freaked out because he doesn’t want a bunch of babies running around the floor of the senate as if that was even the intent of that particular piece of legislation that was just passed earlier this week.

The reason this particular piece of legislation was passed was because senator Duckworth is required to be there in person to vote. She just had an infant that she is breastfeeding, she has to bring it with her, end of story. Other governments across the world already allow this kind of thing. The United States was completely backwards on this particular issue as it is on so many others when it comes to women. But Orrin Hatch didn’t like it. Yeah, he voted for the legislation but now he’s afraid that everybody else is just going to start bringing their little kids into the senate and turn it into an even more infantile government structure than it already is. Perhaps Orrin Hatch spent too much time watching the movie “Babies Day Out” and thinks that they’re going to get in some of kind of trouble with criminals following them around.

I don’t know what his reasoning here is, all I know is that it is completely ridiculous, because as vox.com pointed out, “What if there were 10 babies running around the senate?” Well, that would obviously mean we’d have more female law makers. We would have women in there who would understand and be able to show the men in the chamber why it’s important to properly fund childcare here in the United States. It would be a good thing to have more children in there so that these old white guys who’ve been in the senate for decades understand what it takes to raise children in the United States today. They would understand what working women in this country have to go through and maybe we’d get some real change in this country.

So, having 10 babies, having 20 babies on the floor of the senate is actually not a bad thing, because that might be the only way we get some real change in this country in the form of legislation. But until then we can always take solace in knowing that Orrin Hatch is apparently the biggest baby that will ever be on the senate floor.