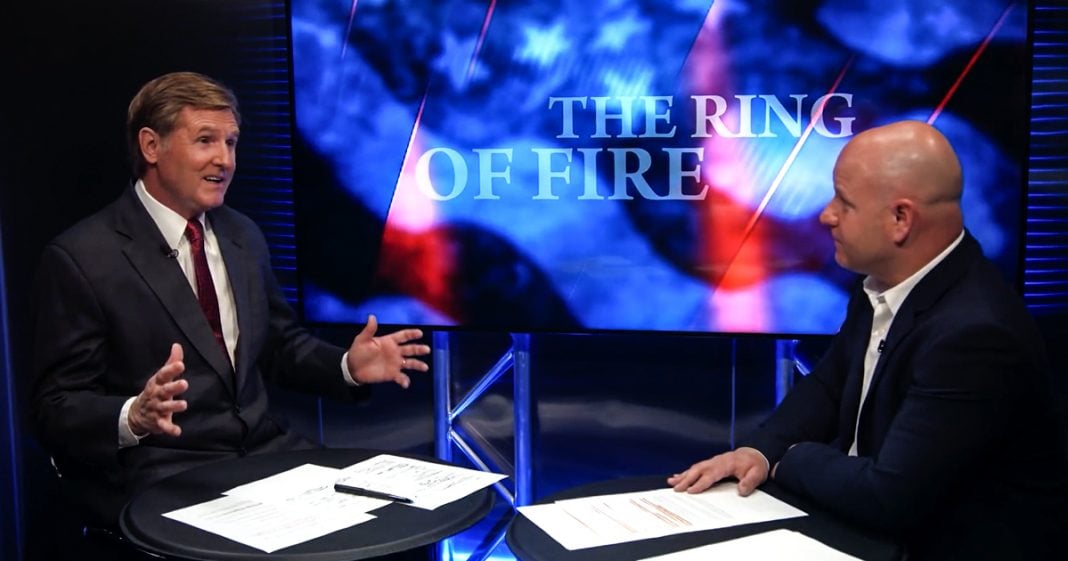 A federal judge has dismissed Exxon’s efforts to block a climate change investigation into the company that is trying to determine the extent of Exxon’s climate cover up. Ring of Fire’s Mike Papantonio and Farron Cousins discuss this issue.

Mike Papantonio: Federal judge has dismissed Exxon’s efforts to block a climate change investigation into that company because it’s trying to determine the extent of Exxon’s climate coverup. So Exxon has been covering things up. We’ve known for an awful long time. We’ve known that scientists have come out and said that they were talking about climate change as 20 years ago, where they were saying, “We’re concerned about climate change,” We think this is a problem. This is their in house scientist saying this. As a matter of fact, I don’t remember exactly the number of articles. But it was well into the hundreds of articles or investigation pieces that were done internally by the company. They did studies internally by the company and they found that less than 11% of those studies, the information from those studies actually made it out to the public and what they did is whitewashed those. The other 90% of the studies or 89% of the studies stayed within the company files and we know that now because whistle blowers are coming forward and saying that. So here you have a company, Exxon, saying, “Gee, we’re a victim.”

They’re trying to call themselves a victim here, aren’t they?

Farron Cousins: Yeah, they claim that these investigations were violating their constitutional rights because it was all this trumped up climate change charges and, “Oh, well, we didn’t cover anything up. You can’t look at our stuff. You can’t go in here.” But listen. A couple years ago, massive treasure troves of documents, internal documents from Exxon came out and they actually … I went through these documents. It was a very unfun project. But 1940s is when that company first discovered that the burning of their oils was bad for the environment. 1940s now and this was decades before the terms “climate change” or “global warming” or “greenhouse effect” even came into existence. They sat on it and at that time, that’s when they realized, “Right after World War II, we’ve gotta do something to prevent this from happening.” Then in the 1970s, with the Lewis Powell memo, on the coverup, attack judges, attack lawyers.

Mike Papantonio: Let’s slow down here. This is an important part of the story. Lewis Powell, the same Lewis Powell who was Supreme Court Justice. People, they think of Lewis Powell, “Oh, he’s a brilliant guy. What a legacy he left behind.” Well, no. His legacy is pretty ugly. Lewis Powell’s legacy is downright nasty and it has to do with exactly what you were talking about. He was the guy that was trying to figure out, “How do we go after the naysayers? How do we go after people who are criticizing?” Tell us that story.

Farron Cousins: Well, he specifically wanted to go after lawyers. He wanted to paint lawyers in this country in a negative light. That’s where the ambulance chaser talking point, it originated from his document. That’s what people took and ran with and the other part of it was to attack science, attack scientists, create phony organizations funded by industry to go after these people and that’s what Exxon … Exxon pioneered it and not just attacking scientists. They went out of their way to pay scientists, offering these huge sums of money, 10, $15,000.

Farron Cousins: Yeah, if you were willing to come out and write a story saying that climate change isn’t real.

Mike Papantonio: Well, but I think what’s interesting about this, Lewis Powell, if you ask Lewis Powell … You’re gonna hear people. “Oh, he was a brilliant jurist.” No. He was a thug. Lewis Powell was a thug and he’s the one that started this whole idea about attack science, okay? Attack science when science comes out and says something. Tell the lie enough times. It was almost a Joseph Goebbels kind of thing that Lewis Powell adopted and Lewis Powell then said, “There’s always somebody in the United States we can find who will write something that’s good for us if we pay enough money, go after the advocacy groups, the people who are out front,” who are saying, “You’re killing our children. You’re killing our environment.” “Go after them, not in a nice way. Prosecute them if you can. Discredit them if you can.” This is Lewis Powell we’re talking about, okay? Then what was the other part of it? The other part was, yeah, come out with front groups, fantasy front groups and call the thing that you’re talking about something that sounds innocuous, like Legislation for a Better World.

Well, Legislation for a Better World may mean we want to pollute more streams and get away with it. That was all Lewis Powell. Exxon took that model and put it on steroids, didn’t they?

Farron Cousins: They absolutely did and that’s what this investigation is trying to find out and the worst part here, though, I have to say this about this lawsuit against Exxon, is it’s not because they destroyed the planet. It’s because the climate coverup could eventually hurt the financial status of their shareholders. So in spite of the fact that they destroyed the planet for future generations, that doesn’t matter. What matters is that you hurt the pocketbooks of already wealthy people and that’s why this started. Now it’s gonna be great to get this information. Hopefully, something good comes out of it.

Mike Papantonio: Well, understand, these are attorney generals in these states, you understand. These are attorney generals who are asking for this information and so Exxon has been blocking them and then finally this Manhattan judge says, “What? What are you talking about, they can’t get the information because it violates your constitutional right to commit a crime?” If you read it, that’s what they’re saying. We have a constitutional right to cover up what we want to cover up so we can make money. I mean, if you really drill down to their argument, and this judge looks at it and said, “Are you frigging crazy?” So what ends up happening is now we have a right to take a look at it maybe. These attorney generals, if they’re aggressive enough, they’re obviously aggressive. They’re sticking with it and so now I’m just wondering what ends up happening sometimes with attorney generals and I’m not saying it’s gonna happen here, but attorney generals are moving through. Attorney generals are moving up to run for governor. They’re running for Senate and so sometimes meaningful, sustained change doesn’t take place there.

What has to happen is some of these children’s lawsuits that have taken place. Those have to stick. But you got kids out in California that are suing Exxon for basically creating an environment that’s gonna kill them and their children and the judge has said, “You know what? I’m gonna let this go. We’re gonna see where it goes. We’ll revisit it on a motion to dismiss. We’ll revisit it at summary judgment. We’ll revisit it another time. But I’m not gonna dismiss the claim because they have standing to do that.” That’s what has to happen.

Farron Cousins: And once we get this information from this investigation of these attorney general, that can be used. That’s something that these kids, Our Children’s Trust is the group, that they can use for their lawsuits. But again, it is disappointing. Exxon’s not in trouble for lying to the public for decades. They’re in trouble for covering up from their shareholders.

Mike Papantonio: From the shareholders.