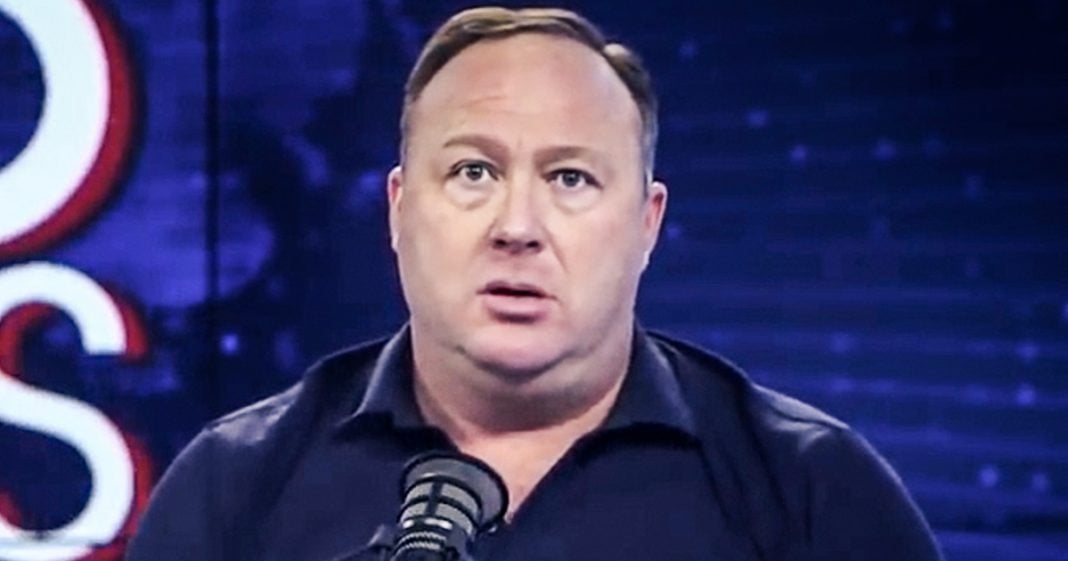 Alex Jones is freaking out after being hit with a defamation lawsuit by the parents who lost their children at Sandy Hook several years ago. Jones, for years, has said that the entire event was a false flag operation, resulting in threats against the families who lost their young children. And now that those parents are fighting back, Jones claims that HE is the victim here. Ring of Fire’s Farron Cousins discusses this.

Earlier this week it was announced that the parents of some of the victims of Sandy Hook are suing Alex Jones for defamation. Alex Jones for many years has said that the Sandy Hook tragedy didn’t happen. It’s a false flag, it was actors, nobody went in to that school, none of these people died, it’s all a hoax and as a result, the parents of some of these children have been receiving death threats, they’ve been threatened by Alex Jones’ followers who believe that they are masquerading as part of this false flag operation in order to enact gun control in the United States.

So after he gets hit with the defamation suit, he obviously goes on his program to defend himself and say that no, he wasn’t defaming them, he’s the one that’s been defamed because he wasn’t really saying it didn’t happen. Take a look at the clip and look at his pathetic reasoning for why he wasn’t defaming anybody.

Alex Jones: AP is the only publication out of dozens I looked at, hundreds of headlines I looked at, there’s 30 plus thousand articles out right now since yesterday, saying Alex Jones says no one died at Sandy Hook, Alex Jones says the parents are liars, all these other incredible lies. And then never quoting what I’ve really said. There’s a few little short clips where I played devil’s advocate a few years ago saying, “Could have completely happened like they say, could have been a hoax because government’s have been caught lying before”, but we investigated it, for about four years I’ve been saying I believe children died there. But they still reboot it, believing it’s something that hurts me.

Okay. Yeah, he’s just playing devil’s advocate, right? It’s not like we have anybody out there who’s been compiling clips of Alex Jones to show what a liar he is. Expect of course for Media Matters, who just put this clip together.

Alex Jones: Sandy Hook, it’s got inside job written all over it. Sandy Hook is a synthetic, completely fake, with actors, in my view manufactured. I couldn’t believe it at first. People just instinctively know that there’s a lot of fraud going on. But it took me about a year with Sandy Hook to come to grips with the fact that the whole thing was fake. I mean even I couldn’t believe it. I knew they jumped on it, used the crisis, hyped it up, but then I did deep research and my gosh, it just pretty much didn’t happen.

So I mean I’ve interviewed the cops and the people that saw the Feds plant the bombs in Oklahoma City. You saw them stage Fast and Furious, folks, they staged Aurora, they staged Sandy Hook, the evidence.

Okay. So maybe, maybe he wasn’t actually playing devil’s advocate there. Maybe he is just a crazy human being who was attempting to use a tragedy to bolster his crazed supporters who will believe anything that this man says. This was 100% defamation. And honestly, these lawsuits against people like Alex Jones for defamation, for libel, for things like that, that’s the only thing that’s going to stop them. Alex Jones, for all intents and purposes, based on all of the available evidence, is a lunatic and he needs to be removed from the airwaves because he is causing very real harm to people in this country, both physical and emotional.

That should not be acceptable and even under the First Amendment that is not acceptable. That is not a form of protected speech and that’s why these lawsuits are very important. The longer Alex Jones stays out there, pushing this propagandist nonsense, the more likely it is that his rantings and the behavior of his followers is going to eventually cost someone their life.