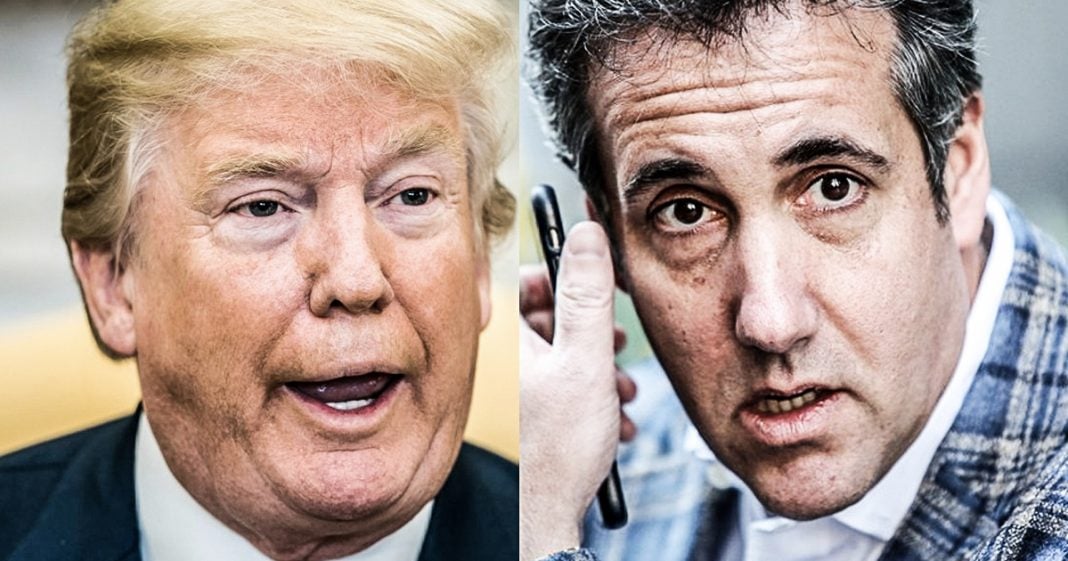 One of Trump’s most trusted legal advisors has reportedly warned the president that Michael Cohen, Trump’s longtime lawyer, could easily flip on him if Cohen ends up facing criminal charges. This is an interesting point for a legal advisor to make, and indicates clearly that Cohen knows Trump has committed crimes. Ring of Fire’s Farron Cousins discusses this.

According to a new report in The Wall Street Journal, Jay Goldberg, who is a longtime legal advisor to Donald Trump, is warning the president right now that Michael Cohen can flip on him if Cohen ends up being faced with criminal charges. Goldberg told The Wall Street Journal that he told Trump, “Michael will never stand up for you if faced with Charges.” Goldberg also warned that Cohen might end up wearing a wire the next time he talks with Donald Trump.

What’s funny about this story is that, yes, Cohen likely would or could flip if that situation were to arise. But, what’s more interesting is why would somebody who is your legal advisor, somebody you’ve trusted for years and years, tell you that somebody is going to flip on you unless they knew that there was information worth flipping? You see, that’s the thing that a lot of the analysis on this story is completely glossed over. You can’t flip on somebody unless you do have information that that person has committed a crime. Jay Goldberg coming out and saying this to The Wall Street Journal is essentially an admission that Michael Cohen knows that Donald Trump committed a crime. That’s what this means. There’s only so many ways you can interpret it, and every single way results in Goldberg knowing that Cohen knows that Trump committed some kind of crime or some kind of possibly impeachable offense.

Now, yeah, there might be a slim margin where Donald Trump did nothing wrong and maybe Goldberg’s worried that Cohen’s going to lie about Trump committing a crime when in reality the man is just a saint. Yeah, the likelihood of that is almost zero. I can’t say it’s completely zero, but it’s almost zero. So, Goldberg here trying to help Donald Trump out has actually done the exact opposite. He has convinced this country now, or at least the people who’ve seen this report, that Donald Trump likely did do something wrong and Michael Cohen knows about it, and now Cohen is the only person with the keys to the ship. Maybe he’s going to flip it, maybe he’s not, but it’s leaving the public with more questions than answers, because you don’t freak out about somebody flipping on you and turning you into authorities if you haven’t done anything wrong. I think we’re well past that point with Donald Trump, and I don’t think there’s too many people, other than hardcore MAGA crowd on Twitter that doesn’t think that Trump hasn’t done anything wrong in the last few years. Goldberg knows it, Cohen knows it, and Trump himself knows it. That’s why he’s so afraid right now.