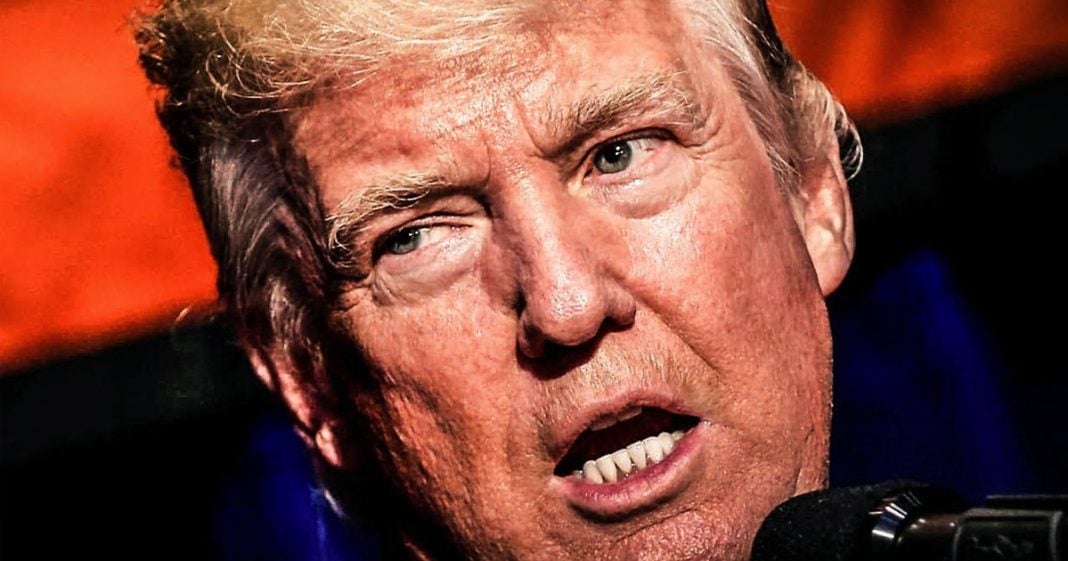 A group of 11 Republican members of Congress have signed onto a letter to Jeff Sessions and the Department of Justice, begging them to prosecute the political enemies of Donald Trump. In their letter, they claim that people like Hillary Clinton, Loretta Lynch, James Comey, and a host of others have somehow violated federal laws, when in reality the only crimes these people have committed is being anti-Trump (to a degree.) Ring of Fire’s Farron Cousins discusses this.

A group of 11 Republican members of the US House of Representatives have decided that it is apparently against the law to oppose Donald Trump or to be, basically, a political enemy of Donald Trump. They’ve sent a letter to the Justice Department and the FBI asking for prosecutions for a list of individuals. Now, here’s the letter that these idiots have sent over to the DOJ asking for prosecutions. The first one they want prosecuted is former FBI director James Comey. Comey’s crime, according to these people, having someone from his office leak information to the press. Former Secretary of State Hillary Clinton. Why is Hillary Clinton being prosecuted by these idiots? Apparently, she personally funded the fusion GPS Michael Steele dossier against Donald Trump.

I guess, these morons don’t realize that that was actually initially started by the Republican Party to discredit Donald Trump. Democrats just picked up the funding for that afterwords once Republicans realized Trump was going to be their guy they couldn’t do anything about it, Democrats funded it. There’s nothing illegal about that whatsoever. That’s opposition research, that happens in every single campaign ever. Former Attorney General Beretta Lynch, former acting director of the FBI Andrew McCabe, FBI agent Peter Stzok, and FBI counsel Lisa Page, and former US attorney Sally Yates.

I don’t want to get into all of the individual alleged crimes that these people committed, but here’s what’s happening this group of morons, and that is 100% what they are, are trying to prosecute Donald Trump’s political enemies because they want to distract the public from the investigations going on into the Trump administration itself. It’s, basically, the usual list of suspects you would expect signing on to this letter. We have Representative Ron DeSantis, Andy Biggs, Dave Bratt, Geoff Duncan, Matt Gates, Paul Gosar, Andy Harris, Jody Hice, Todd Rokita, Claudia Tenney, and Ted Yoho.

All of these people think that it should be a crime if you’ve ever run afoul of Donald Trump, or hell if you’ve sent a text message indicating that you might not support Donald Trump like Peter Stzok and Lisa Page. Well, guess what? You’re under investigation now under this new Republican no respect for the rule of law, let’s just investigate everybody because they’re investigating our people because there’s actually crimes on that side. Look, here’s the thing, if you want to waste your time, if you want to waste tax dollars going after these investigations I actually don’t care. If you want to look into them and see what you can find, and have congressional hearings, and investigations, and all kinds of stuff be my guest. It will do nothing to satisfy your hunger for taking down Democrats who aren’t even in power anymore.

That’s the funniest part about this, what is it going to prove? Suppose you even find a crime, and you throw one of them in jail, what does that do for you? How does that help you out in the next election when you’re running again somebody who’s actually not even involved in politics anymore? You can’t run against that. You can’t make that into a campaign. You gain nothing from this other than maybe a little bit of favor from Donald Trump. Go ahead with your stupid investigation, show this country just how idiotic you truly are because that is what everybody who is looking at this with a rational brain views it. You people who signed on to this letter you need to find something better to do with your time or maybe you should start distancing yourself from the criminals in the Trump administration so that you don’t have to go on these wild goose hunts every time new damning information comes out about the guy that you refuse to un-hitch your wagon to.