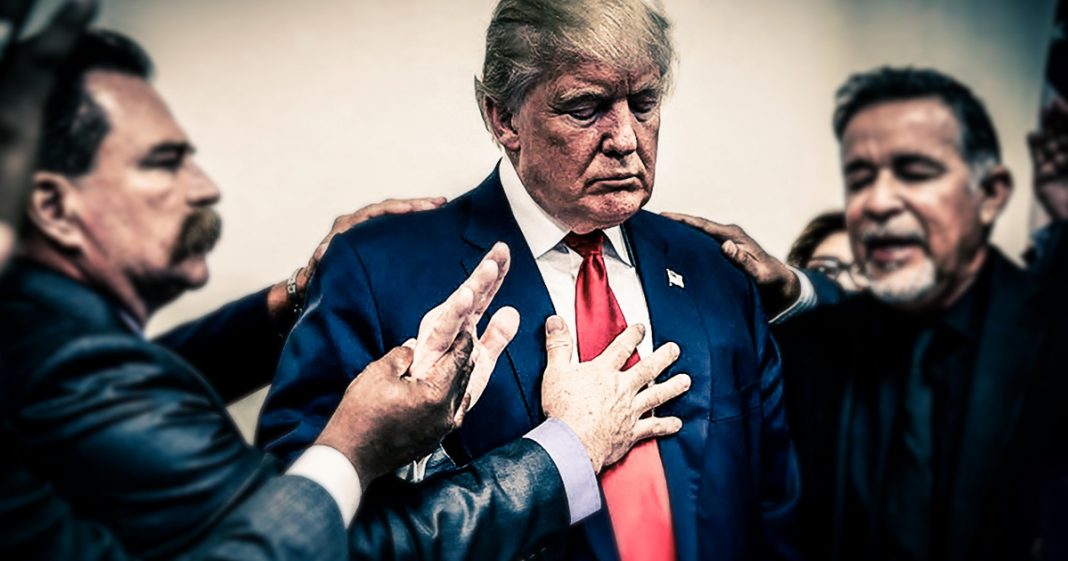 A group of evangelical leaders say that they are ready to have a talk with Donald Trump about the alleged affair with adult film star Stormy Daniels and the potentially illegal hush money payment that his lawyer made to the actress. After staying silent so long, can anyone even take these evangelicals seriously? Ring of Fire’s Farron Cousins discusses this.

According to a new report, evangelical leaders across the United States are finally ready to have a sit-down conservation with Donald Trump, and talk about the entire Stormy Daniels affair, and the potentially illegal payment in hush money to Stormy Daniels that his lawyer made.

So this is a great development for evangelical leaders in the religious right. I mean, they only sat on the story for what, two months, before deciding, “You know what, maybe we ought to go talk to the guy and figure this out.”

At this point it doesn’t matter. You evangelicals, religious-righter’s, whatever you want to call yourself, lost all credibility on the moral issue even though you really never had any, but you may have had some amongst your followers. You could have jumped on this in the beginning, and you kind of did, because you said you’re going to give him a mulligan on it, and just turn the other way and pretend it didn’t happen.

Now that the story hit national news, and we’re getting stories on 60 Minutes, and mainstream outlets are starting to cover it, you can’t ignore it anymore. I’m sure you’re own parishioners, your flock, is asking questions of you as to why you would let this philandering adulterer off the hook, especially when it might involve an illegal payment in hush money.

Evangelical leaders have now said that they want to meet with him sometime very soon, and just sit and kind of hash things out. Talk it through. Figure out what happened. Maybe get the philanderer’s side of the story. It’s not going to do anything. The religious right, wants again as has happened so many times, has been exposed as nothing more than a gaggle of frauds and hypocrites. These people do not care about the morals of any other human being, especially their own.

That’s what these people care about, and now that they’re being exposed as frauds they finally decided, “Well maybe we need to talk about the Stormy Daniels issue, and see if we can get Donald Trump to tone it down a bit.” Not going to work.