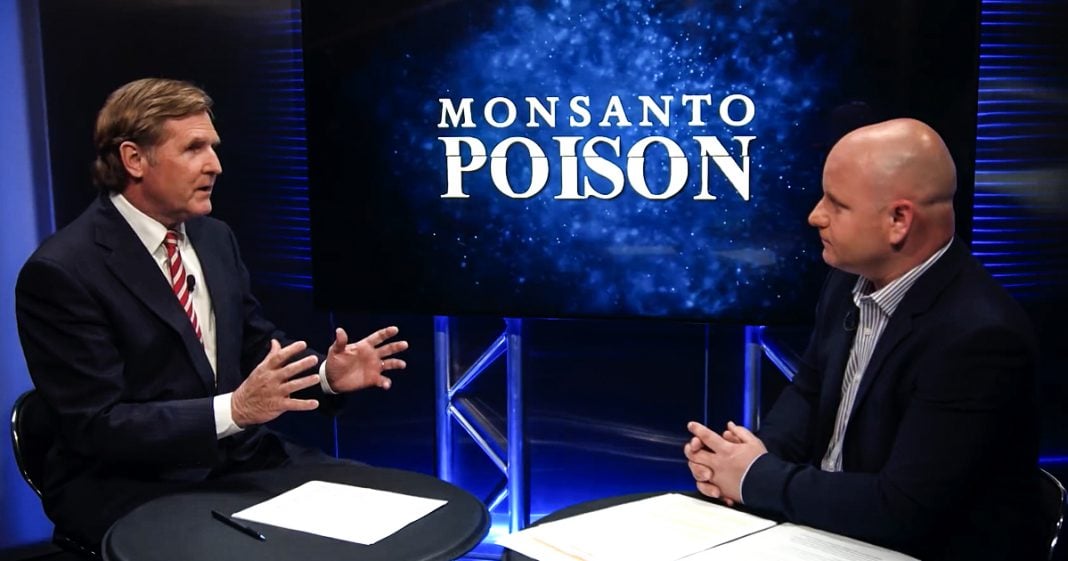 A recent study has found that some of the most popular beer and wine brands in this country contain dangerous amounts of Monsanto’s weedkiller Roundup, posing a HUGE health hazard to American consumers. Ring of Fire’s Mike Papantonio and Farron Cousins explain.

Mike Papantonio: A recent study has found that some of the most popular beer and wine brands in this country contains dangerous amounts of Monsanto weedkiller RoundUp. It is everywhere. It poses a huge health hazard to American consumers and people simply don’t understand that this story is not being told about how dangerous this product is. Farron, what bothers me about this is at the bottom line for consumers is they should have a choice. They should understand, “I want to buy this product because I know what’s in it.” Now here you have Monsanto, that for years, they have been fighting labeling at all costs. They don’t want labeling that it’s GMO. They don’t want labeling that it contains RoundUp. They don’t want the connection between the reason that GMO is dangerous is because RoundUp saturates the GMO. They don’t want to give the consumers any choice. This is a great example of what happens when you don’t give consumers a choice by simply telling them if they want to drink the wine that has arsenic or the wine that has glyphosate in it, that’s their choice. But give them a choice.

What’s your take on this story?

Farron Cousins: I agree 100% and in this particular issue, I think people kind of have this understanding when you’re going and you’re buying fresh produce, there’s a risk that this could have been sprayed with RoundUp. It could be a GMO. But when you’re buying a finished product that has glyphosate in it, people don’t ever think of that connection. But glyphosate, it does not cook off. It does not rinse off. It does not wash off. If it is on a food substance and that substance, like a grain that’s used for making beer or making break, it stays on it through the finished product that then gets consumed by the human being. So it’s in the bread. It’s in the beer. It’s in the wine. And there are not just a few beer and wine labels. These are the biggest ones. Gallo, Beringer, Mondavi, Barefoot, Sutter Home, Budweiser, Busch, Coors, Michelob, Sam Adams.

Mike Papantonio: Okay, so here’s the bottom line. I mean, what’s interesting. People see you doing political elements to Ring of Fire. They don’t understand a lot of times, you are editor of the National Trial Lawyer Magazine, which is the biggest lawyer magazine in American, maybe in the world. So you have followed this story. You’ve actually done this story and one thing that I thought was interesting and something that you’d written is you talk about the idea that organic, we should at least believe that we’re not gonna find RoundUp in our organic wine, right? That’s not the case. As a matter of fact, as we look at this story, what we find is that even with organic wine, you find 23 part per billion in the wine. Now that doesn’t sound like a problem. It is a huge problem because the cancer research that’s coming out, it’s very clear shows that one part per trillion has the ability to cause breast cancer cell division. Now if you don’t understand that, it’s very clear. They’re talking about they know 23 parts per billion is in the wine that you’re drinking with glyphosate, with elements of RoundUp.

They also know that one part per trillion has the ability to cause cancer. That’s what I’m talking about when I talk about choice. People should have the choice. I don’t want to drink wine that has RoundUp in it. I don’t want to drink the stuff. I’ll go get something else. Isn’t that what this is all about, is just choice?

Farron Cousins: It is and another part of the issue here, and this could open up a whole new area of litigation, in fact, I think it was with Dicamba, is the issue of drift with RoundUp because you may have these farmers out there doing everything they’re supposed to. They’re not putting these harmful pesticides or weedkillers like RoundUp to keep consumers safe. But it still ends up on their product because it blows in the wind. It evaporates and then rains back down on these other farms. This is mentioned in the story as well and in some cases, it just gets into the soil, slowly goes into the groundwater, gets repumped somewhere else to an organic farm and there you have RoundUp on crops that people try to do the right thing, end up spraying RoundUp on their crops. They don’t know it. The consumers don’t know it. They think they’re buying something safer because it says organic. But that’s a marketing term. Organic is a marketing term.

Mike Papantonio: Exactly. We’re finding it in wheat, organic wheat, organic barley, soy. Here’s the real issue. This is what should scare the bejesus out of my Monsanto. But they’re bulletproof. They’ve got such political clout. Of course, now they’re in with Bayer. Bayer and Monsanto, two of the biggest corporations in the world. They have all the political clout they want. They’ve got the Democrats with them. They’ve got the Republicans with them. They’ve got the regulators with them. They even have the media with them. So what is happening now is we’re finding that RoundUp is not just in the wine. It’s in baby formula. Soy is used for baby formula more than any other product. What we’re finding is it’s in the baby product. Now add to that that there are studies after studies that show … We’re just talking about breast cancer here. There’s studies that show it’s related to Parkinson’s Disease. It’s related to brain cancer in children. It’s related to the World Health Organization, for God’s sakes. The HI-ARC, the World Health Organization, the UN World Health Organization said they studied it. They said this stuff will cause cancer.

Farron Cousins: Well, I have to add to your list because there’s this massive list here of all of the diseases or illnesses that have been linked by independent scientists because God knows we’re not gonna get any real studies from the EPA or FDA here. ADHD, Alzheimer’s, anencephaly, autism, birth defects, brain cancer, breast cancer, other forms of cancer, celiac disease, chronic kidney disease, colitis, depression, diabetes, heart disease, hyperthyroidism, inflammatory bowel. The list keeps going. There’s so many here.

Mike Papantonio: Now this sounds weird. I’ve read every one of the studies because I have to take depositions in this case the end of this month. So I’ve read every one of the studies. What every time a study comes out, here’s what you see. You see this attack, for example, Seralini. This article that we’re doing about finding RoundUp in the wine, this came about because of a scientist named Seralini who did the study in 2018. He came out with this list and he says, “We studied all this.” By the way, he has no ax to grind. This guy has no agenda. He is simply a scientist who did a study a couple years ago that showed that the component parts of RoundUp, not just the glyphosate, but all the adjuvant, the other parts of it, that those parts independently have the ability to cause cancer, leukemia, non Hodgkin’s lymphoma. So what ends up happening is what do they do? They attack Seralini. They try to get him fired from all of his boards. They attack him in his university. They get the idiotic, stupid, moronic, corporate media to side with Monsanto against Seralini.