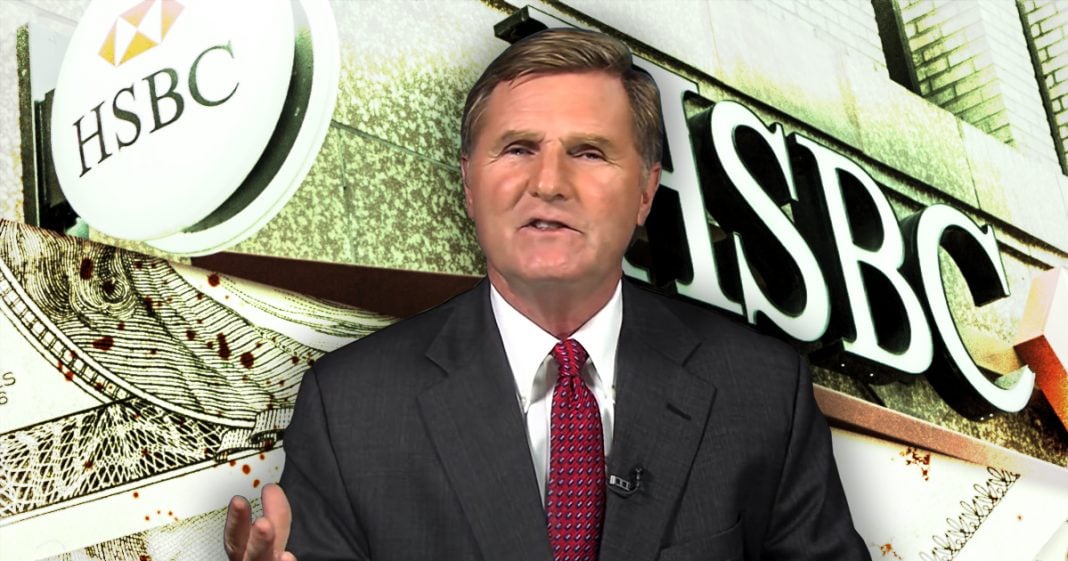 It came out a few years ago that HSBC had helped launder millions upon millions of dollars for major drug cartels, and they knowingly did it. And at the end of the day they were charged a big fine, but no one went to jail. America’s Lawyer Mike Papantonio joins Lee Camp to discuss the civil suits popping up against HSBC and UBS about their terror and drug money laundering.

Lee Camp: You know it came out a few years ago that HSBC had helped launder millions upon millions of dollars for major drug cartels, and they knowingly did it. It wasn’t like, “Oops, we slipped up.” And at the end of the day they were charged a big fine, but no one went to jail. And now there are these civil suits popping up against HSBC, UBS about their terror and drug money laundering. Can you tell us a little about that?

Mike Papantonio: Yeah, in 2015 UBS AG paid millions of dollars to defend and settle what was characterized as a clear violation of US terrorism sanctions. They thought it was a good idea to process hundreds of transactions worth of millions of dollars for entities that were placed on terrorism blacklists. They’d been warned about the terrorism blacklisting, they knew clearly who these people were, they chose to ignore those warnings and take huge, major mega, mega profits because they knew that they could do what HSBC did, which is, go ahead and steal as much as you can, violate the law as much as you can. Ignore the law, go ahead and empower terrorism as much as you want because at the end of all that you have a Department of Justice in The United States that’s going to let you pay a fine and go home. And that’s what Loretta Lynch did, that’s what Eric Holder did, and because of that we’re continuing to see more activity. The case you’re talking about was a 2016 as HSBC sued for laundering money for cartel terrorists, who murdered Americans, by the way.

The case was initiated in a Texas federal court, maintained that the London-based HSBC Bank provided continuous … and here’s what’s important … it was continuous, and it was a systematic support for laundering cartel terrorist money.

Mike Papantonio: Well, let me give you an example here, Lee. In the HSBC the document that they had to sign admitted that they had broken the law, they admitted that by breaking that law that they had cost American lives. They admitted that they were aware of the terrorism ban on not laundering money, on not aiding terrorists, they admitted everything. And Loretta Lynch, and Eric Holder refused to put them in jail. Why is that? Because Eric Holder and Loretta Lynch comes from that part of the lawyer world that defends these corporations. Eric Holder, before he became Attorney General appointed by Obama, he actually worked for Covington Burling. The people he defended, white collar criminals, were people like HSBC. And so, yeah, HSBC was fined $2 Billion for engaging in terrorism that cost Americans lives. And you know, the American Justice Department acted like, “Wow, this is a huge victory.”

You should see the press conference where they’re trying to dance around and make it look like a huge victory, and the questions are being asked for them by reporters, “Wait, we don’t get this. They’ve admitted breaking the law, huge felonies that would put most people in prison for 100 years, and nobody went to prison. Interesting story.”

Lee Camp: Yeah, there’s a serious revolving door spinning furiously for positions such as Eric Holder had, and then he heads back to corporate America and gets a pat on the back. Is there any sign that these banks are letting up or changing their ways? Does a billion or $2 billion fine make them stop these actions?

Mike Papantonio: No, they won’t change their ways. I said this all the way back in 2008 when Obama let everybody go. You remember he ran for office and he said, “I’m really going to punish some people. These bankers are in big trouble.” Do you remember this talk when he was running?

Mike Papantonio: Wall Street was going to be held accountable? Okay. So, nobody went to prison, the person he brought in was Eric Holder from Covington Burling who, … by the way, you might not know this. Eric Holder left Covington Burling to give all of his white collar criminals a pass, and now you know where he is? He’s back at Covington Burling after he’s no longer Attorney General. So the answer is absolutely, positively no. They will not stop until Uncle Freddie goes to prison, and somewhere in MBA school up at Harvard or Yale they talk about the fact that “Uncle Fred did this and he went to prison for 20 years, so maybe we shouldn’t do it.” But as long as all you’re doing is making them pay a big fine it doesn’t mean anything to these people. It’s the cost of doing business. If they make $100 billion and they have to pay $2 billion there’s no problem there. It’s a really good deal for them. So, no, they’re not going to stop it.

And I don’t see Sessions doing anything different. You know, he’s not doing anything to these folks that created an opioid crisis that has 170 people dying every day from opioid overdoses. Nobody’s gone to prison. He has enough facts to put them in prison right now but he won’t do it.