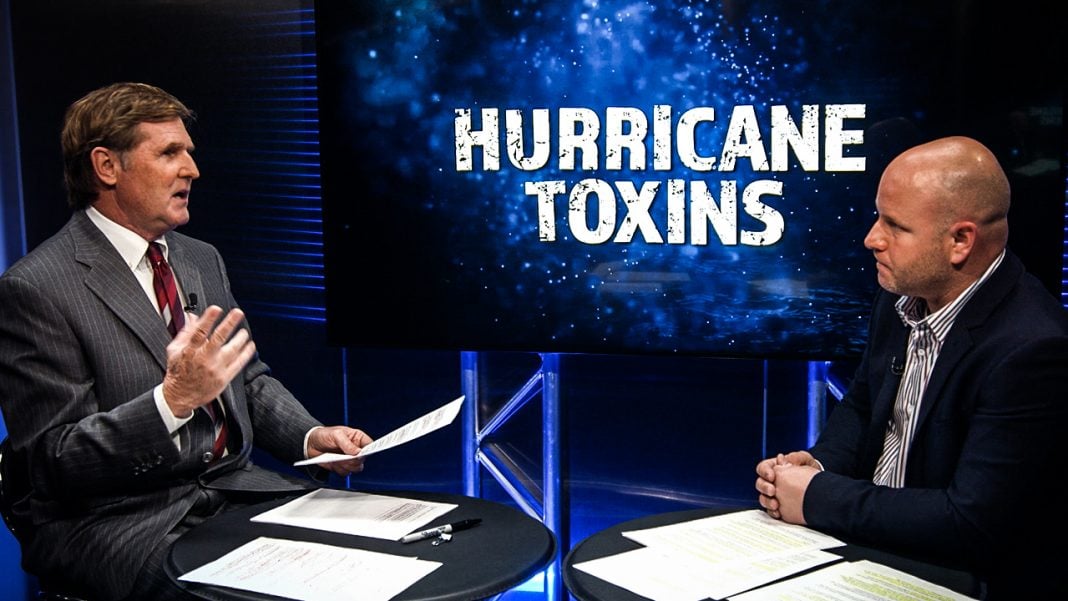 It’s been 7 months since Hurricane Harvey hit Houston, Texas, but the toxins released when the storm hit are still present, and they pose a huge health problem for residents. Ring of Fire’s Mike Papantonio and Farron Cousins discuss this.

Mike Papantonio: It’s been seven months since Hurricane Harvey hit Houston, Texas, but the toxins released when the storm hit are still present. I mean they’re everywhere, and they pose a huge health problem for residents. Unfortunately, this is being covered up. Now, people watching this are going to say, “Well, it’s Houston, Texas. They get what they deserve. The politics down there are abysmal. The regulators work for the Republican party. The leadership with Abbott and various people who have been in government there, Texas deserves it. By God, if they’re going to be poisoned to death, they haven’t done anything about protecting themselves legislatively.”

Farron Cousins: This is one of the most unreported yet most important stories to come out of Hurricane Harvey here because you had 500 chemical plants in Houston, 10 refineries, most of which flooded, chemicals leaking out from nearly every single one of these plants, cancer-causing chemicals, by the way, dioxin, benzine, things like that, into this flood water that then moves along.

A few days before the storm, you actually had Government Abbott, he announced that none of the companies … “You will not be liable in any way when and if this hurricane destroys your facilities and, more importantly, I’m suspending all environmental monitoring so we won’t even know.”

Mike Papantonio: Yeah. Let me pick up with that. As a matter of fact, the monitoring that took place, the US Coast Guard … There’s a company called Magellan Midstream Partners. They were in the refinery business, and they said, “Well, we had a little bit of a problem. We only lost 42,000 gallons of gasoline directly into people’s aquifer. For all practical purposes, it’s moving into the groundwater. It’s moving into the aquifer.” Then they find out, “Oh, well, maybe we were wrong.” AP and The Chronicle pick up, no, it wasn’t 42,000. It was 460,000 gallons of benzene toxins running through the local groundwater.

Now, again, I tell you this. There are people watching this show, and they say, “Well, you know, by God, Texas deserves it. They’ve brought this on themselves because of their backwoods politics.” It’s not just about Texas. You see, this is what’s so bothersome to me. There was so much benzene release. First of all, let me tell you, benzene … There’s zero question that benzene causes leukemia. It’s not maybe it does and it could. It does. Connection to benzene will cause leukemia. We know that. They have done, at this point, zero to have any control over what happened with the benzene. If you’re looking at this story, the benzene now is not just in Texas. It’s in the Gulf of Mexico, right? Isn’t that part of the problem?

Farron Cousins: It is. That’s the biggest issue here is that all of this happened as a result of the flood waters, so all of these chemicals … When we saw the pictures of the water going over the interstate system, that water was contaminated with gasoline, with benzene, with dioxin, with all kinds of chemicals that then … they get spread everywhere. They go into people’s yards. They go into people’s homes. Half of what doesn’t get sucked up into the ground as the water seeps into the ground evaporates. They recorded some of the highest levels of air pollution containing these same chemicals in the week or so after the flood, so it’s in the air. It’s in the water. It’s in the ground. It’s everywhere for these people.

Mike Papantonio: Farron, let me answer one part that people may not be … Well, they’re just saying, “Well, it was an act of God. It was a hurricane. They couldn’t do anything about it.” No. There is plenty of technology that prepares for things just like this. They’ve had to use this technology in Asia for years because of things like tsunamis. The truth is, the technology is there. How do you protect a plant? How do you protect a Superfund site? In other words, you’ve got Superfund sites that were completely uncovered that had DDT, PCBs, all types of toxins that are now in the environment there in Texas, but it’s not just Texas. You can’t isolate Texas and say that it doesn’t have any connection to the rest of the ecosystem.

Farron Cousins: That is because when you look at any of the fines that they could have or any … really, even the lawsuits they could face, that’s still going to end up being rolled up into the cost of business. They write those off on their taxes if they get fined for Clean Water or Clean Air Act violations. They write off losses from lawsuits. I mean-

Mike Papantonio: Consumers end up getting it in the end [crosstalk 00:05:20]-