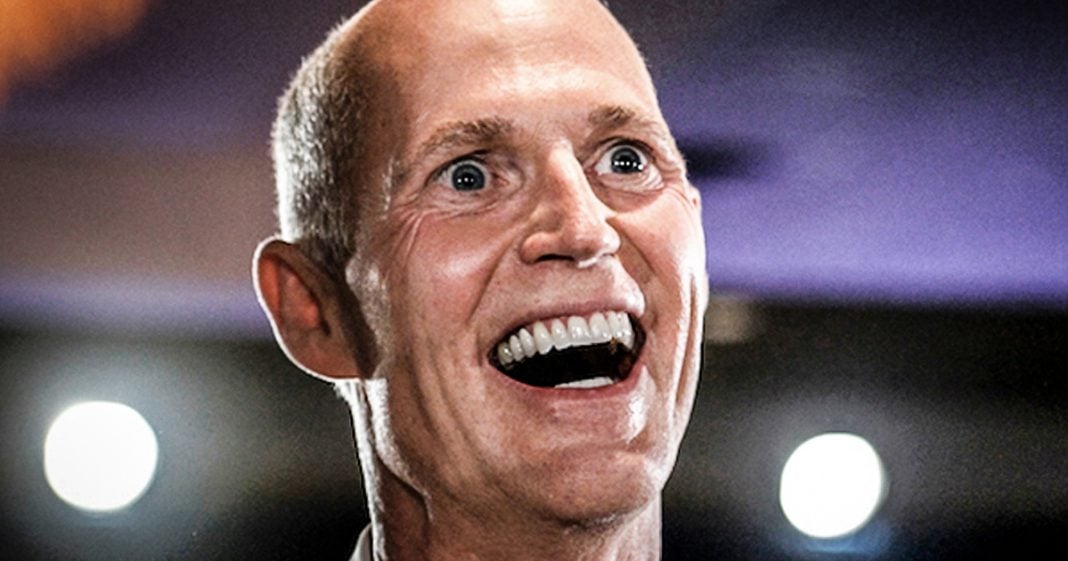 Republican Florida Governor and future Senate candidate Rick Scott is being sued by children in the state for his refusal to take action on climate change. Scott has been an avid denier of science during his tenure as governor, and with so many low-lying coastal areas in his state, his inaction and denial of the problem is going to lead to serious consequences for future generations. Ring of Fire’s Farron Cousins discusses this.

Republican Florida Governor Rick Scott has political ambitions that go beyond the state of Florida. He has recently announced that he is going to be running for Senate so that he could be in the Senate with Marco Rubio, probably making Florida one of the worst states for senators in the US Senate. Nonetheless, right now, he is still the governor of the state of Florida and, as such, he is being sued by several children in the state for his continued refusal to take action on the issue of climate change.

The children, who are represented by the group Our Children’s Trust, who has also launched other lawsuits involving government inaction on climate change in other areas of the country … but anyway, the clients range from age from 10 to 20 years old. They’re suing the Florida governor because they are the ones who are going to have to clean up the mess, live with the damage, and possibly even relocate to a different area because people like Rick Scott continue to refuse to believe in science and accept the reality that climate change is happening.

Marco Rubio, though not listed in the suit, should also be listed in there. He is a guy who, just like Rick Scott, readily admits, “I’m not a scientist, so I don’t know the truth about climate change.” Well, you don’t listen to the scientists anyway, so why would it matter if you are or are not a scientist? The scientists are telling us that this is happening and that the state of Florida is going to get it just as bad as any other place in this country if not worse. The city of Miami is in danger of being underwater and not existing within the next 50 years. I mean that’s in our lifetime.

The city of Miami will likely not exist anymore unless they somehow manage to relocate the entire thing, and Rick Scott thinks that’s just fine. Why? You think Rick Scott’s going to be around in 50 years? I mean I don’t know exactly how old the guy is, but I seriously doubt he’s going to live to be 110 or 120 years old, so this won’t bother him, but it’s going to bother the people listed in this lawsuit. They’re the ones who are going to have to deal with it. They’re the ones that are going to have to deal with trillions of dollars in economic losses due to coastlines in the United States creeping further and further inland.

That’s what these lawsuits are about. It’s not about seeking financial damages and making these kids rich. They’re not looking for any money for themselves. All they want is the government to take action on one of the biggest issues that is being ignored universally by politicians in the United States. That’s what all of these lawsuits are about. It’s not about financial gain. It’s not about making a statement. It’s about protecting this planet so that, by the time all these old science-denying Republicans die off, we still have a country that’s habitable.