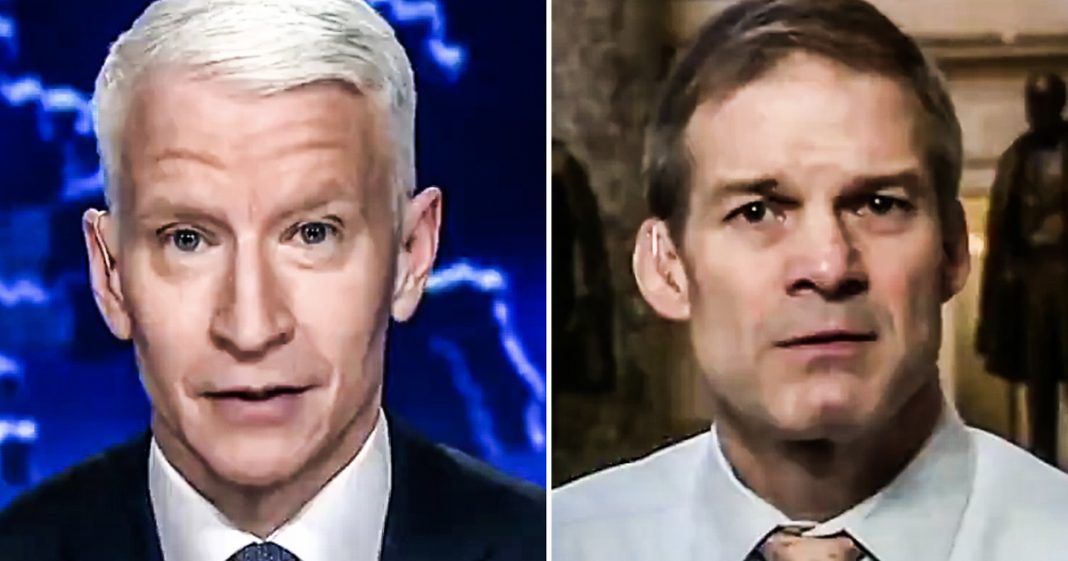 Republican Representative Jim Jordan is clearly suffering from a form of deafness that has yet to be diagnosed. In a recent interview with CNN’s Anderson Cooper, Jordan claimed that he has never heard Donald Trump tell a lie, which either means Jordan himself is lying, or he has severe hearing loss. Ring of Fire’s Farron Cousins discusses this.

During an interview with CNN’s Anderson Cooper, Republican Representative Jim Jordan from Ohio admitted that he has never heard Donald Trump tell a single lie. This leads us to wonder, one, maybe Jim Jordan is suffering from some kind of undiagnosed deafness, or two, Jim Jordan might just be an idiot. Take a look at the clip and see Jim Jordan kind of squirm when Anderson Cooper kind of presses him on the issue of whether or not Trump has ever lied.

Anderson Cooper: Come on, you got to admit, this president has said things which are just demonstrably not true time and time again. The list is a very long one, almost on a daily basis.

Jim Jordan: I think Andrew McCabe has said things that aren’t true and the Inspector General didn’t make an investigation …

Anderson Cooper: Does that make it right?

Jim Jordan: And was fired because of that.

Anderson Cooper: Right, so you’re very bold in calling out Andrew McCabe, not so bold on the President of the United States.

Jim Jordan: It wasn’t me calling Andrew McCabe, it was his colleagues. I mean, it was the Inspector General of the Office of Congressional …

Jim Jordan: I’ve not heard the president, has always been square with me, that’s for darn sure.

Anderson Cooper: Well, what about the American people?

Jim Jordan: The American people elected him President of the United States.

Anderson Cooper: Right, okay, but have you ever heard the president lie? That’s what I’m asking you.

Jim Jordan: I have not, and the American people feel like what the treatment he has received from the top people at the FBI …

Anderson Cooper: Okay, A, I don’t think you can talk about all of the American people, but I’m asking you just yourself, have you ever heard the president lie?

Jim Jordan: I have not.

Anderson Cooper: Really? When The Washington Post counts hundreds and hundreds of times, none of those are believable to you?

Jim Jordan: I have not seen what The Washington Post reported. You’re asking has the president communicated something that wasn’t accurate to me? I’m not …

Anderson Cooper: No, not to you. Has the president publicly said anything that is a lie?

Jim Jordan: Well, I mean, look, I don’t know of it. Nothing comes to mind. Look, people who talk as much as you and I do, my guess is probably Anderson, you may have said something at some point …

Listen, Representative Jordan, if you’re having a little trouble coming up with any lies that Donald Trump has told, let’s just go back to the very beginning in the first days of his presidency when he lied about the crowd size at his inauguration. He then lied about three to five million illegal voters in the 2016 election. He lied about other crowd sizes. He lies damn near every day. Hell, just this morning he lied about why he fired James Comey on Twitter, completely contradicting what he said last year. Yeah, if you need an example of a time that Donald Trump lied, the easiest thing to do is just go to his Twitter feed and read the most recent tweet.

Donald Trump has a problem admitting to reality. He lies about his poll number, lies about his favorability ratings, lies about jobs coming back to America and companies coming back to America and middle class workers getting a tax cut. Those are all lies that the president has told in the last 24 hours. Yeah, go ahead and tell Anderson Cooper that you can’t think of a single one, because that’s what a good loyal little Republican does for Donald Trump.