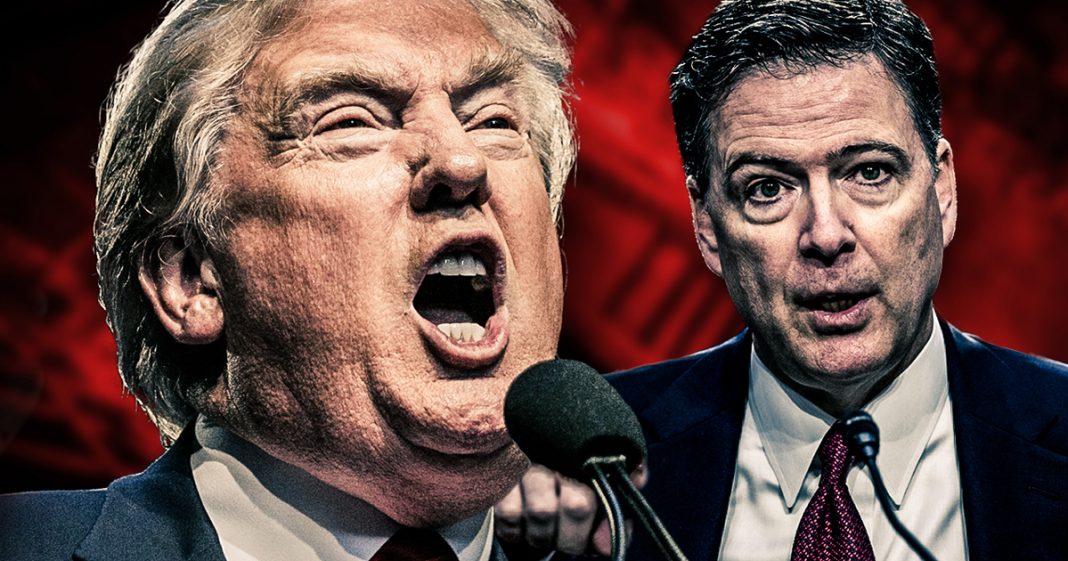 Former FBI director James Comey’s book is being released today, and Donald Trump is absolutely freaking out on Twitter. In addition to calling for Comey’s arrest, Trump has spent the last few days doing all that he can to attack Comey and the FBI’s credibility. But the attacks go far beyond just the President – the Republican Party itself has poured far too much time and money into smearing Comey, completely forgetting that this is the man who sealed the 2016 election for Trump. Ring of Fire’s Farron Cousins discusses this.

Well, today is the day a lot of people have been waiting for James Comey’s book, A Higher Loyalty is officially released to the public today. If you weren’t aware that today was the day, all you had to do was go through Donald Trump’s Twitter feed and watch the real-time meltdown that he was suffering this morning as a result of Comey’s book being released.

He has repeatedly, not just today, but over the last few days, last week, called for Comey to be jailed. Didn’t exactly say why, just that this guy that wrote a book that’s probably not positive about him should be thrown in prison. I guess under Trump’s America, that probably would be a jailable offense.

What’s really interesting here is not just the fact that Donald Trump is melting down over this Comey book that he’s having these Twitter tirades that people are making fun of him for. It’s the fact that the Republican Party itself, the RNC, has joined in on the attacks on James Comey.

They started this website, LionComey.com, where they’re attempting to smear James Comey before the book came out we talked about in a video last week, but they’ve gone all in trying to smear this guy or basically undermine his book just to protect Donald Trump.

Now, the reason this is interesting to me is because I remember back during the Republican primaries, when you had all these Republicans saying that Donald Trump does not represent the Republic Party. You had these higher ups of the RNC saying, “We’re not going to fall in line with him.”

Even after he won the election, his first few months in office, the Republican Party itself, the RNC wasn’t very happy with him. They weren’t going along with everything he said. We have Republican politicians speaking out against him, but now here we are a little over a year later and suddenly they’re falling right in line doing everything they can to protect this man who in all likelihood will be impeached before the end of his first term, and why?

The Republican Party is risking all of their credibility to protect Donald Trump. They’re doing it right now by attacking a private citizen. Here’s the thing about James Comey that I don’t know that Republicans are smart enough to understand. If Comey hadn’t gotten involved, your dude wouldn’t be president right now.

Yeah, Hillary Clinton ran a bad campaign. She was a very weak candidate in all of that. I’m not taking that away from her, but Comey’s announcement 11 days before that election … I think it was 11 days. That’s what tip the scales. That announcement is what took that election from neck and neck to a Donald Trump victory. Donald Trump had … They should be praising Comey. They should be making monuments to this guy, because he’s the one who got them in the White House.

Nobody is going to be swayed by this book just like nobody was swayed by Michael Wolff’s book Fire and Fury. That seems to be what happens with this. Everybody has their own confirmation bias, and anytime one of these pro-Trump or anti-Trump books come out, it only feeds what the person wants it to feed.