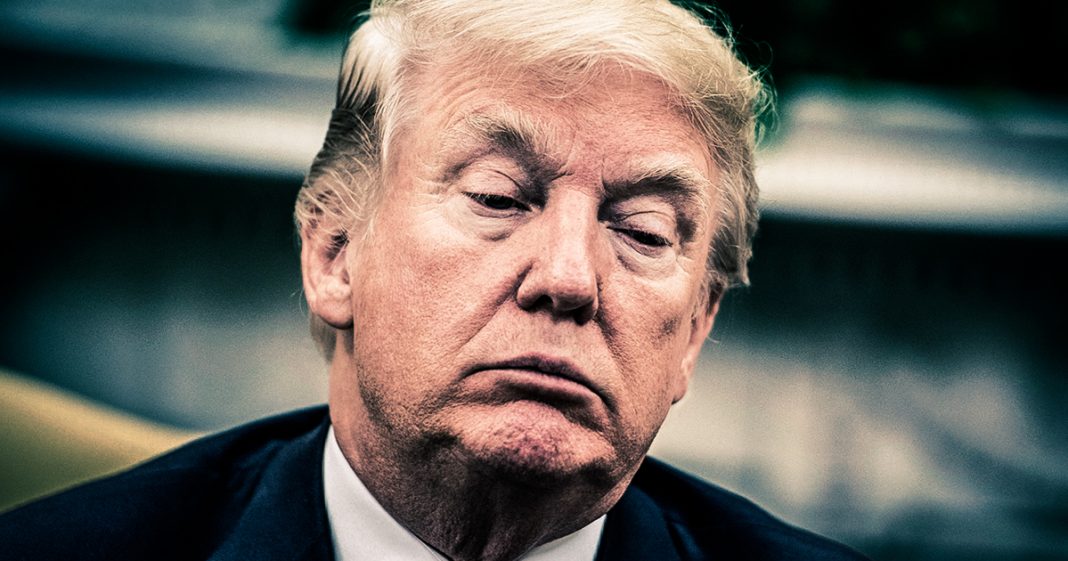 The Presidency of Donald Trump will be viewed by historians as an experiment that failed miserably. Taking a mediocre businessman with no political experience and plopping him into the Oval Office was a bad idea, and the amount of turmoil and general lack of knowledge from the White House on pressing issues only further proves that point. Ring of Fire’s Farron Cousins discusses this.

So Donald Trump has been president of the United States for a little over a year now, and I think it’s safe to say that at this point, given what we’ve seen and what we know is on the horizon, that this entire Donald Trump experiment has been an abject failure for the American political system. Historians are going to look back on this presidency as an experiment. They’re going to say, “You know, the voters tried something new. They tried something different. They put in a complete moron who knew nothing about American politics to see if he could run the government better than people who’ve spent their entire careers learning about studying the law, practicing law, working in the government, and they wanted to see if this know-nothing could do better, and it turns out he absolutely couldn’t.”

Here’s what’s happening in the Trump White House today, and this has nothing to do with any of the scandals or any of the investigations. That is a whole ‘nother story. But right now Donald Trump is struggling to keep staffers inside of his White House. He can’t keep people. He’s firing them via Twitter, and replacing them with people who sucked up to him at one point in his life. These aren’t people who know anything about running the government. We have Scott Pruitt, Steven Mnuchin, Kellyanne Conway, Ryan Zinke, Ben Carson, people who have absolutely no business being inside of the federal government, running agencies that they know nothing about, and by every single possible measure they’ve all been abject failures.

Scott Pruitt is supposed to be protecting the environment. Instead, he’s spending money on himself. Ben Carson is supposed to be in charge of housing and urban development, and he wants to spend $31,000 on some silverware and some plates. Ryan Zinke, Secretary of the Interior, is just flying all around the world in first class private jets. Kellyanne Conway is on a lot of those flights with Zinke doing God knows what, and Steven Mnuchin charged federal taxpayers for a flight to go to Fort Knox to get up on the roof with his wife to watch the eclipse. This isn’t how the government is supposed to work, and even though we have had plenty of corrupt and horrible administrations in the past, Bush, Reagan, Nixon, we’ve never seen incompetence of this level. The corruption, again, that is a different story completely.

What we’re dealing with and what historians are going to look back on is the staggering level of incompetence and it all flows from Donald Trump. This is what happens when you put a guy who has no idea what he’s doing, doesn’t know anything about the law in the highest office in the land. I know that some people are going to say like, “Well, look at the economy. The economy’s doing better. Jobless claims are falling. They’re at a several-decade-long low right now,” and that is true. The economy’s doing better, but it’s really not. Wages are stagnant across this country. That tax cut package isn’t getting people raises. It’s giving rich people raises, but workers aren’t getting a thing.

Retail chains across the country are closing up shop because of greedy hedge fund managers who came in, bought those businesses up, and then ran them into the ground and still made a profit off of it. That’s going to screw over consumers. It’s going to lose tens of thousands of jobs, which we’ve already lost tens of thousands as a result of this. Jobless claims are going to fall because there’s not going to be any jobs available for people to be applying for. That’s another measure of jobless claims that people forget about. You only get counted for so long. If you stop actively looking for work, you’re no longer counted. If you’ve been looking for work for too long, you’re no longer counted in certain numbers either, so yeah it’s all a shell game. The government is not running smoothly. The government is not running well. Hell, on any given day, the government’s not even running because of the incompetence that we have in Washington, D.C. I think it’s time that everybody, left, right, center, and everything on the fringes comes together and finally admits that this Trump presidency experiment was a complete failure.